As a big 1.09 player, it is impossible for me not to get excited about this drop.

The time for the last update on my barb has come. He officially got to 99 today. Took me around 320 hours (6668 LK runs, 2046 Baalruns, 13396 Nihlathak runs, many NM/Hell Andy/Meph runs, trav runs, random pitruns and many more). The last bit wasn't that tough. I pushed myself a little more this week and did like 1,8k runs since Monday. Nothing special, but i don't really grind that much tbh XD Vipers were mean as always, mainly to my merc, but i had some stressful situations with them too, cause of my greed. Nothing spectacular though. 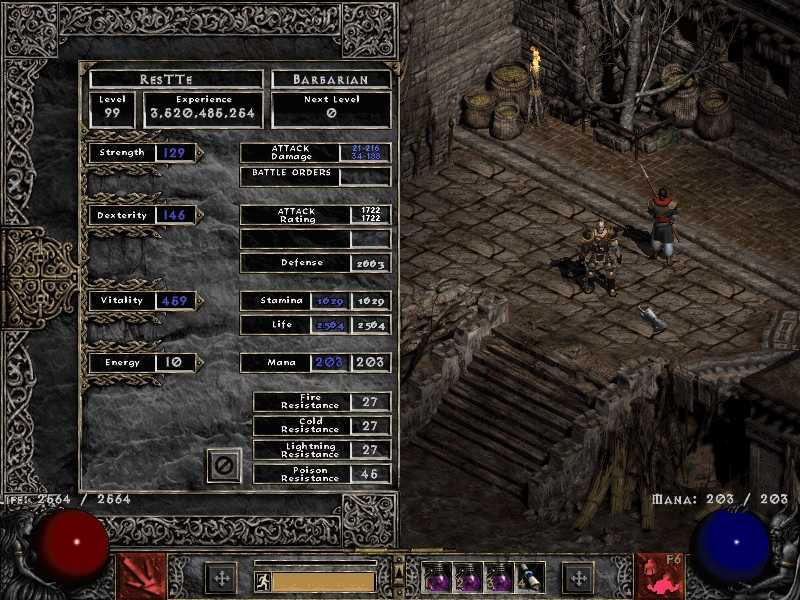 Clip of the lvl up:
Run Counter screenshot:
I did more Andy/Meph runs on both Nightmare and Hell difficulty, but wasn't using runcounter back then... 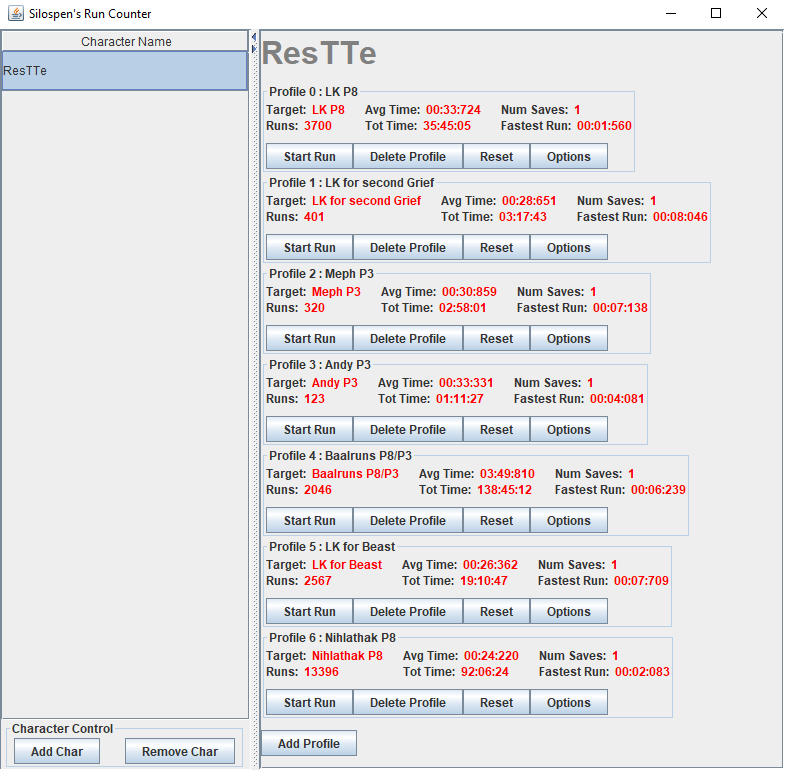 Got some nice items that you can see below. 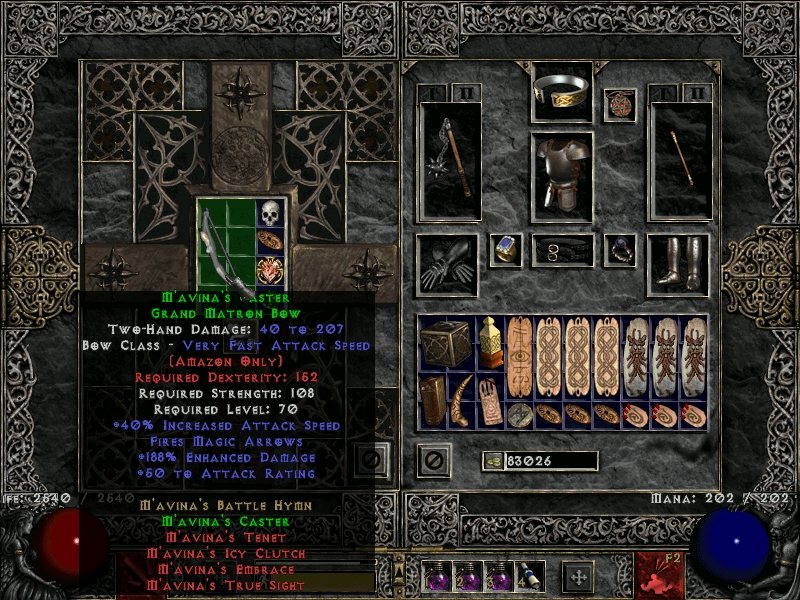 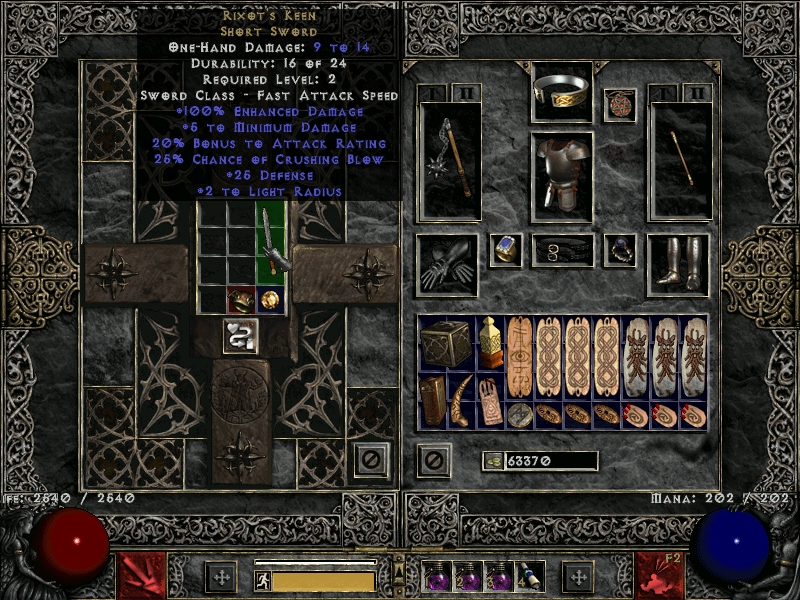 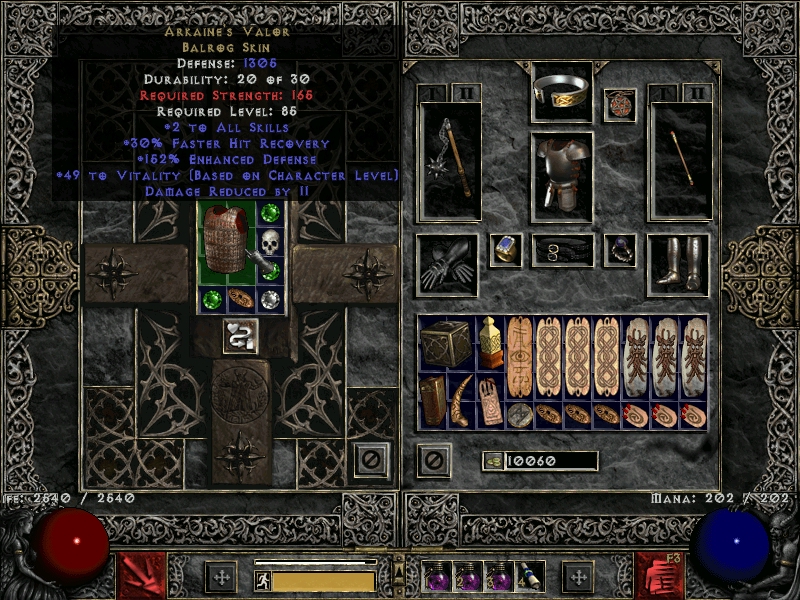 Clips of the other drops:

I finished the first part of this char which was lvling to 99. Now i will focus on the second part which is getting Holy Grail done. Have to farm some essences and other random items to be able to do that though...

Thanks everybody for the support. It was fun to do this project. Will make a write up soon of course, so stay tuned.

Huge congrats @ResTTe and really fast progress for the last level, and especially at the end! I'm looking forward to the write up because my barb will be following a very similar path to yours.

@PhineasB Thanks! I made a write up for this barb. Took me a long time, cause i wanted to make it more like a guide. You can find it here: https://www.diabloii.net/forums/threads/my-succesful-attempt-in-doing-sc-untwinked-99-barb.966932/
F

Grats on finishing the Barb @ResTTe! Which class next?

@ffs Thanks! I have some plans. My current project is grailing with this barb. I also want to do untwinked 99 sorc and pala, untwinked melee assassin playthrough and some farming with her and maybe try to do untwinked HC barb playthrough once again with farming. We will see...

I just gambled a 4% BK. Today is the luckiest day of my life.
F

Managed to do quite a bit of running this week and pushed Lucid to 98.65.

After going back and forth for a while, I revisited the idea of running without Holy Shield, so that Confuse from Dreams procs more reliably thanks to the Paladin being hit more often. It reduces Viper-related S&Es a bit, whereas other spawns (in particular Might, Fana) just take some getting used to. Some of his last couple of runs to 98.65 with this approach:


Due to the way above average amount of XP shrines in this batch, this extrapolates to 4.68m XP/h – obviously not his real long-term average... It does feel like a noticeable improvement over his previous approach though, which netted some 3.5-3.6m XP/h whenever I timed him.

He found a small upgrade in the meantime with a perfect Mara's, replacing his [email protected] one. Not sure I shared his current gear here before, but it's included at the end of the video for those interested.

He also found another Spirit Keeper and second eth Cranebeak.
Only 60m to go till Ancients and 99!

Nice progress! I forgot Lucid still had Ancients, which is always a nice way to wrap things up. Good luck on this last stretch!
F

Yeah, apparently it took me 3 tries to become smart enough to pick a class/build that wasn’t better off running Baal before 98.

GL to your last stretch as well! What’s the ETA for Quinta?

Still aiming for Quinta to ping before the end of the year. She's at <40M left, so it should be doable, especially with the holidays. The wrinkle is that I'm temporarily moving into a new position for work, with a lot to get up to speed on and likely longer work hours as a result.

Hey everyone, still alive! Classic Wow really sucked me in there for a second (not in the sense that i play too much, not nearly enough time to play anything too much, but it did take any free time i had). Everything going great with our second little man, he's a healthy and happy fatso.
Great to see everyone still chugging along with this, big grats to @ResTTe for finishing your barb (love the PDR emphasis) and @Pb_pal for finishing the HC Druid! Will check out the write ups during a poop or something in the near future hahaha. Good luck to everyone else on continued progress (@PhineasB and @ffs so close!)

I'm also back after a break and figured I'd give a small update, since Baal gave me a welcome back gift:

Griffon's #2 with a 15/-15 roll, which makes it worse than the one I'm wearing. It's still nice to see a second one drop this early after waiting so long for the first one to show up!

I doubt I'll hit 98 before the end of the year, but once I do I'll probably start doing some LK runs with the paladin.

Also big congrats to @ResTTe on hitting 99 and @Pb_pal for becoming the first HC 99er in this reboot! I knew you could do it!

@ffs you did mention that you spec'ed out of Holy Shield. I was wondering, did you ever considering 2H vengeance (eBotd in 2H wpn) ?
(I am planning / preparing on how I will do Nila with my paladin - who now is a zealot - my fav setup so far, using an old paladin of mine as test subject - is smite with grief. Right now I am doing some runs with eBotd Colossos blade and I kinda like it - oath could be a nice budget option actually)
Last edited: Dec 18, 2019
F

@drmalawi I didn't respec no, just stopped casting it in most cases, except when I see Might/Fana rolls without Vipers (then I cast it before engaging Nihl). Admittedly my skill points in general are not ideally allocated at the moment given I figured out some things since starting 98-99. But in order to respec I'd have to kill Ancients already, which I don't want to do before 99.

Actually Smiter was the first build I tested, and I was 95% sure that would end up being the best option for Nihl. Surprisingly, I now think it's a very bad option. Basically for two reasons:
I thought about 2h BotD (in GPA base), but ended up preferring the dual Dream setup. Apart from losing out on the huge lightning damage from Dreams, 2h is generally slower. GPA maxes out at 10 FPA, and even that is hard to hit without Faith Merc. Even with 1h BotD, I went with to a Faith Merc to speed things up to 8 FPA. Maybe the biggest reason for Dreams though was that apart from the damage boost, they provide the necessary crowd control via Confuse CtC (hence no longer casting HS most of the time). That is godsend for Nihl running.

What I tested in-game apart from 1h BotD/Dreams and Smiter was Sacrifice and Hammerdin. But found they didn't work too well either. IMO Vengeance is the way to go. But there are lots of options to play around with, such as 2h vs 1h, A1 Merc with Faith vs. A2 Merc with lots of different weapon options etc...

EDIT:
Oh and I can definitely confirm is that Avenger with dual Dreams + Oath works very well. That's what I tested with when exploring options with twinked chars before respeccing Lucid for 98-99 -- since I didn't have 1h BotD before on my twinked chars -- and it's also part of Lucid's corpse recovery kit. Main downside is that leech will need to be obtained form other sources, whereas BotD takes care of everything you need. Pretty small downside considering how easy to get Oath is.
Last edited: Dec 18, 2019

ffs said:
Last Wish was too little damage for a Smiter

Exile, which is not a great Smite shield
Click to expand...

You did not try Grief?

Consider this then: I might not have access to dual dreams You still Avenger is the way to go?

Yes of course I tried all Smiter setups with Grief except when I tried Last Wish (which was much worse).

Good news and bad news at the same time, but you will be running a lot even before 98 and chances of finding 2 extra Jahs/equivalent before 98 are very high.

ffs said:
Good news and bad news at the same time, but you will be running a lot even before 98 and chances of finding 2 extra Jahs/equivalent before 98 are very high.
Click to expand...

I have played smiter on Bnet a lot (you know, pandemonium key running / ybers ) so I am pretty comfortable playing him at Nila (but perhaps not in 25second games 1-2h / day )

I try to plan a head with "worst case" scenarios Also if I manage to get dual dreams, I might actually do baal runs since those are also kinda fun with tesladin.