@Bewitch Why did you switched from that botd gp? Is that dmg difference that huge?

intersilva said:
I’m scrambling all of my charms today just for you <3
Click to expand...

Some news from Prairie. She's past half lvl 92 now, doing various runs (CS, Baal, AT mainly).
I died a few times, and now I'm convinced that I need that this CtA Just a MAL Rune to find, and that's good.

No nice drop to mention, but a resist improvement with a better Vipermagi (+14% all) 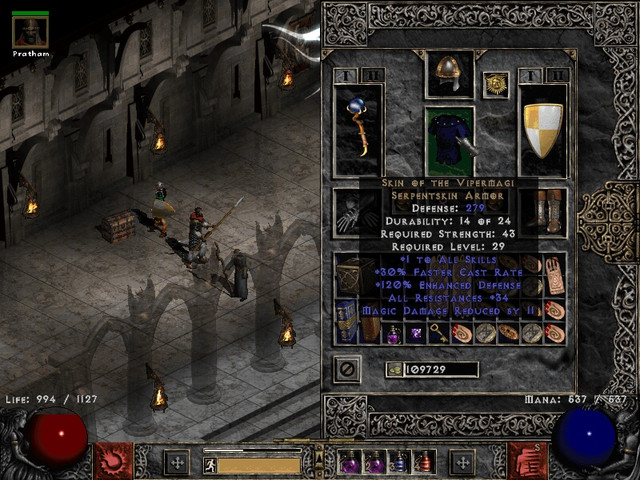 By the way, I never noticed my Reaper's toll's %ed roll was so good !
I played with a non eth cryptic axe insight all the time, just for the mana bonus, and I don't even remember when I dropped this !
It's a relief, my merc is efficient. I wonder if I may switch to a might paladin, just to boost his damages ? holy freeze is less useful with the decrepify cast ? 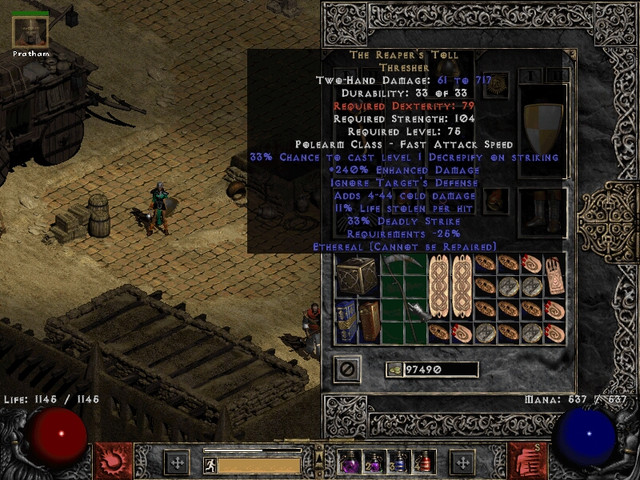 I have a question : when I respec to Blizzard/Fireball, I was too light with the fire skills, my fireball deals too few damage. Most of the time, I let my mercerary kill cold immunes (mage knight in the CS for eg.)
It slows me , even if I know I don't have to kill everyone, but sometimes I have to, especially in Baal's throne room.
So, my options are :
- respec again, with more fireball synergy (it means less blizzard synergy) to be more balanced
- respec again, with another secondary spell, if any can be more efficient than fireball with 23 or 24 skill points invested (firewall ?)
- respec again to pure blizzard, at least I'll kill even faster other monsters, and manage somehow to get my mercerary even more efficient (need a good helm for him at least)

I think 3rd option would be better... I'm not sure yet what to do.

I don't think a secondary element is worth it without Infinity. So I guess option 3!

It has worked before
F

I have not yet started RFL R3 in hopes of finishing Enigma soon with Lucid. He's slowly progressing and picked up another 2x Pul, 2x Um, Mal, 2x Gul. Now Sur + Ohm would do, should I decide to cube up from below Sur.

Still a little disappointed that no Surs are in sight, but he had two quite nice drops:

Courtesy of a corpse. I had expected a long search for a very good Spirit base and potentially even using a Larzuk quest as @PhineasB resorted to, so this certainly made things easier. His second Spirit roll got 35 FCR/90 Mana and I kept it for now. He has another ~80 sets of Spirit runes to work on that Mana roll at a later point.

He also found a near perfect Nagel (30/71) and another pair of WT (39 MF), these will come in handy once he starts to MF. Let's just hope those Surs finally show up soon.

Wow! Well, I guess there is an alternative to farming Enigma with just Surs from LK... namely with just Bers from LK. I can't say for sure but I think this ended up taking about 26-28 hours, pretty happy with that.

Big question was of course which base. I don't particularly like the BP look on Paladins, but not a huge fan of LP either. Unfortunately the (IMO) better looking leather type armors that can get 3os have strength requirements that are a bit too high to justify, so I ended up using a BP. (Sorry no proper build-up screenshot given almost no cubing.)

While I was at it, I rolled his (first) CtA, which of course got +3 BO, as I always seem to do with first try here. I have the runes for another roll but will wait for a bit in hopes of getting a decent staffmod base.

So he donned some MF gear and currently looks like this:

Merc (HF): Insight War Scythe, Crown of Thieves, Duriel's Shell
Plan now is to farm Mephisto for a bit for some further S&Us. He got a nice welcome present as well:

See you guys in RFL!

Congrats on the Enigma! That's pretty amazing to pick up 3 Bers without a solitary Sur, with the last, what, an hour after you had complained of lack of progress toward Enigma
F

Yeah in fact more like 30 minutes of running after complaining... which yet again proved to help. I checked of course and none of the Ber patterns was new – indeed unexpected to have three Bers make up for the total lack of Sur drops. But I'm not complaining (for now ).

I'll do a brief pre-RFL Round 3 update.

Pestilence has found his map after quite a bit of rolling and testing. What I found is that the map with spawns around Nihl's platform makes a much bigger difference for the Necro than the Assassin or Sorc. The Sin shut down projectiles with CoS, and Sorc was generally safe with step-back technique from merc (as was the merc) and confuse generally proc'ing quickly.

It's different with the necro due to IK, which like the merc likes charging forward headlong. I was losing merc every 5 runs with some maps where he and IK were in the viper clouds. Even with confuse, I couldn't get all of them due to multiple spawn points around the platform. I also couldn't use NE arm platform due to limited space past the platform: the merc got "stuck" regularly where necro blocked him in. He got this sweet base in the first handful of runs:

After getting 4M or so, he had a death as I got frustrated with having to bail / losing merc too many times and pushed his luck with vipers around. With a big assist to @ffs for his vids (both for technique and seeing his map with almost no spawns in corners past the platform and limited spawns on other side of platform), I committed to rolling a map with limited spawns. I also switched up to dual Dwarf Star and a 2/10 necro caster amulet (sort of; see below).

He probably worked through 30 maps before getting a low-density-around platform, two-shrine map. Along the way he picked up Arkaines:

On the current map, he hit 98.05 yesterday and has since gotten his RFL set under way.

Observant readers will notice the red shading on the background for the rings in the screenshot above. When swapping in the second Dwarf Star, I didn't have a second that matched, so pulled two matching ones out of my stash. Apparently, I hadn't checked to see if they had been ID'ed, and didn't notice they weren't until seeing that screenshot when he hit 98.05. He's quite a bit sturdier with the dual Dwarf Star's actually equipped . . .

With S&E lag, he isn't going to reach the 3.5M/hr range like Ric (not to mention that I'm not nearly as fast as @ffs on the character / difficulty selection or scanning drops). But it appears he will be north of the 2.5M/hr benchmark, factoring in XP shrines and aborted runs. So he should eclipse 3.3B on this set if I can keep him alive.

He still takes a bit more attention to play than Mercy or Hiatus did (and certainly than Phaedrus in CS), meaning I can't play quite as long without breaks. So the 20-hour set over three weeks is a great format to get him started into 98-99

Thanks again to @ffs for all the testing with Ric and the vids, which are helpful. I'll try to record some runs so others have the benefit of seeing two different maps. Good luck to everyone who's participating in RFL with their untwinked 99ers!

Sorry, I don't see what's wrong with the tabs in my post, can't see any formatting difference ??

Chaostar said:
Sorry, I don't see what's wrong with the tabs in my post, can't see any formatting difference ??
Click to expand...

Formatting was still ok, but the links to threads for the Hall of Fame characters were missing.

LongingForDeath said:
Formatting was still ok, but the links to threads for the Hall of Fame characters were missing.
Click to expand...

aaah ok, didn't notice there were links here. I got it, thanks
F

@Chaostar No worries. Apart from the links, @ioupainmax put a lot of effort into the formatting the table so that it's displayed in monospaced font etc. while editing, which makes it much easier to update them. That was gone as well. There's a description linked in the first post here.

@PhineasB I know what you mean regarding Necro gameplay, takes a little longer to get some routine with it, but once you do it's pretty straight forward. GL!

So I've been lurking and considering playing a character to 99 since...2006 or so. I think I'd like to do it with a non-sorc character, even if that does mean a few thousand visits to LK. I'm torn between poison or bone necro. Bone necro has a bit of extra safety with bone armor, but I feel like poison's AOE is solid and it looks like that's what Ric used to hit 99 from 98. A few questions:

Why summoner to 98 then switch? Is it because bosses are the only real source of xp? If so, then why not switch earlier since CE does most of the heavy lifting anyway?
Does it matter between bone and poison for killspeed?
How much (if at all) is a synergized bone armor worth?
F

@testyfish Kind of depends on gear as well, but in my case the build choice was down to which target provided best XP at a given point in time. With the gear available to me, I was best off running Baal waves until 97, and for that Summoner was better. In general, PN is the strongest build. But yes, in any event CE is what deals the real damage.

Small update on Lucid, who's on his way to 89 running Mephisto. Looking for Shako and Arachnid Mesh in particular, things started out with a major heartbreak:

That hurt! To make things worse, despite gaining ~10 levels at Mephisto (he did run the Pit for a while in between), he still got neither Shako nor Arach. However, there were several helpful drops along the way:


Andy's, Mara's, HoZ and Wisp may all see use at some point. Also a second Metalgrid wasn't too bad!

After getting another base from Mephisto, he rolled another CtA – and finally broke my untwinked 99er CtA curse.

Couple of Pit runs for a change of scenerey also delivered an eth Hellforge Plate, which was cube socketed and turned into a Stone as an interim Merc armor.

Unfortunately, we still can't handle P7 CS runs comfortably enough, so I have not yet started an RFL set. Plan now is to continue with Meph runs for Shako and ideally (non-eth) Arach. Will probably not stop running him until at least one of those drop – let's hope that happens soon! #complaining Next up will be a proper Insight base for Merc, after which he'll hopefully be able to transition to CS for good.

Keep it up everyone!