Battleforge finally hit 90 last night, which is at least 3 or 4 levels higher than any character I've ever made. Seems like this trip to 99 might take a while, because yikes it is slow already. I think part of the problem is that my gear is still pretty substandard. Well anyway, I do keep working on that aspect of this journey. See some consolidated screenshots of my finds, with comments below.

My first big find was the Wizardspike. It has the same FCR as the Spectral Shard I had been using but obviously with much greater resistances. It allows me to have other specific items in the hardest difficulty without worrying about maximizing resistances, such as Stealth armor, Chance Guards, Sanders' Boots and M'avina's Belt, etc. I have found several skillers, the most of any one tree being 3 cold sorc skillers. The Gheeds Fortune that Battleforge found will be hard to beat and earned a permanent spot as soon as I got it. I have spent most of my money gambling circlets, caps (for a Harlequin Crest) and battle boots (for an Aldur's set boots) and in the process of doing that I got this sweet Amazon tiara. I think it would be great for a Strafer, which I would like to make some day.

My other nice jewel is a 39% ED version and I like it a lot. Probably no room on this build for it, but nice nonetheless. The paladin circlet is what I call the poor man's version of a Shako. I dumped the 2 socket helm I'd been wearing since almost the start of the journey (some FHR and 48% MF was all it had) and put it on for times when I want to fight. I also have another circlet in the stash with 30% FRW for times I need to hustle, such as LK. This screenie also shows my first Mal rune, which dropped after the Zod and Lo and Ohm. I am still looking for a 4 socket flail for Hoto and the Pul that goes into it too (though I can cube one). I have also not seen a Gul drop yet.

I'd also been spending some time in the Mausoleum and Crypt as a break from the CS/LK drudgery. I can do those areas at P8 and there are lots of drops. Last night I got this and thought I might have a candidate for the BOTD that is now tugging at me like I'm Frodo Baggins with his ring. Alas, I guess I don't know the difference between a Colossus Sword and a Colossus Blade, and this only gets five holes. It would make a nice Death RW though, if I ever decide to use a barb merc or run a Chargeadin, which I've also never done before.

@OldSoldier - Congrats on hitting 90! You've got some really cool finds in there, I especially like the RJoF and the Sharp GC of Vita. Very cool!

Also pretty cool that over half the participants are now 90+!

@OldSoldier Congrats, very well done . Some really nice finds. I agree with @Pb_pal, the RJoF and the Sharp GC of Vita are the most obvious ones. I wouldn't mind that Tiara or Circlet though !!

What probably slows you down, isn't only your gear, but also the fact that you are HC. And don't have Enigma iirc. I'd say you are doing pretty darn well . Btw, which gear are you currently using, next to the pieces you mentioned?

O yes, and good to know where all the cold skillers I can't find go to ...

@Pb_pal Cool indeed. As a matter of fact, I actually think that those that are still active, all hit 90 now. I haven't really seen any progress reports from the others iirc.

T72on1 said:
As a matter of fact, I actually think that those that are still active, all hit 90 now. I haven't really seen any progress reports from the others iirc.
Click to expand...

So I'm in last place eh? Well then, I'm happy to be bringing up the rear!

There's no last place in a journey of this size . And besides, who knows I spent twice as much time on the game already as you have, in HC and without Teleport nonetheless !!!

I for one am actually very inspired by your character here. I've never tried a Hammerdin, and never felt like doing so, but ever since this journey and your participation, I'm inclined to start one at some point.

Last place does not exist mate, it is more like a conveyor belt in this tournament If you are HC anyway!

The last half of the level went smoothly, aside from one death in the last 30M of the level which was frustrating. We got our body back though, so it didn't hurt too too much. She continues her search for a +2 sorc skills/10+ FCR amulet, either rare or crafted will suffice, with no luck. She did manage to cube herself an 8 FCR one though . She also managed to upgrade her Gheeds to 37%, which she was quite pleased about.

She was just starting to think of all the Bers, Jahs, and Chams that everyone has been finding lately and she was starting to get a bit miffed about her non-LK rune drops. Her highest so far has been a solitary Lo. Right when she was about to start writing an angry letter to the Runedrop Gods, this happened: 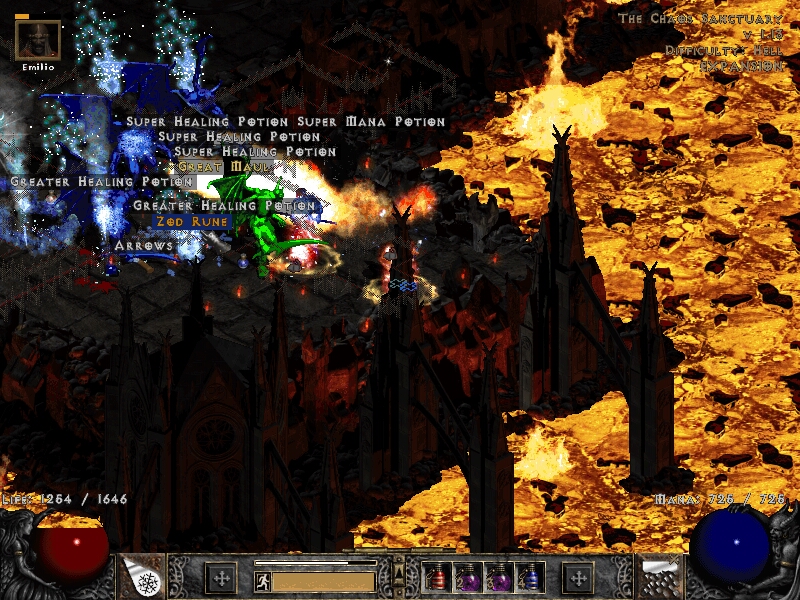 Wow! Well I guess I can't complain about rune drops for her ever again!

It's not overly useful for her, but always a welcome sight. This marks the second Zod drop of my career (and both fairly recently, too!). Now I'll have to wrestle with the decision between not only Insight vs Infinity for the merc, but BotD too. Hmm.

Cathan's Seal is now the most found item (29 found), with Isenhart's Case bringing in 2nd place at 23.

Other finds:
- Ist
- Mal
- Always nice to see some class-specific uniques (grailers, as well) in HoZ and Spirit Keeper.

Pb_pal, your journey has almost begun!

After my HC Blizzard Sorc died in LK last year, I have stopped playing HC. Recently, I cannot resist the temptation of playing HC again, and I just got a new laptop. So I think, why not take this opportunity to do a fresh start in HC in 1.14? Something challenging, no RWM and no ATMA/GoMule.

Now seeing this thread is so active, and I've been enjoying reading all the progress people do here, I just might as well join!!!

I hope it is not too late. Starting today, I will put some effort on making an untwinkled 99er

About S/U: I'll have to check later when I get home. Isenhart's Case definitely is close to the top spot, if not at it. But maybe a bit surprisingly, Tancred's weapon is there as well iirc.

Edit: just missed @XyleneCyanol's post apparantly. Good luck on your journey. That's definitely some restrictions you put on yourself there. Very interesting. I wish you a safe trip.

I never signed up any tournament before, and it took me a few minutes to get that table aligned properly

About S/U: I'll have to check later when I get home. Isenhart's Case definitely is close to the top spot, if not at it. But maybe a bit surprisingly, Tancred's weapon is there as well iirc.

Edit: just missed @XyleneCyanol's post apparantly. Good luck on your journey. That's definitely some restrictions you put on yourself there. Very interesting. I wish you a safe trip.

Was that one untwinked as well? That is pretty wild that we hAve 9 past 90 in 2.5 months!
I wonder if start dates have anything to do with it? Didn't kesteg's tournament start in September or so?

I will keep visiting this thread on a regular basis, and post update.

Oh, the first unique is Rixot's Keen, forgot to take screenshot, though

@coju Kesteg's started mid october. Seems like the perfect timing for such a project. At least that's when things usually start to get a lot more quiet for me, and I get far more playing time. And yes, it was untwinked.

@XyleneCyanol Rixot's Keen ... a TC3 as first unique !!! For sure your trip will be blessed .

coju said:
Was that one untwinked as well? That is pretty wild that we hAve 9 past 90 in 2.5 months!
I wonder if start dates have anything to do with it? Didn't kesteg's tournament start in September or so?
Click to expand...

It was easy getting to 90, now the medium sets begin so you have to take short breathers.[emoji14]

@Pb_pal You could even consider going with a Barb merc for that zod. They are a lot more hardy and have way better AI than the Act II walking auras. Maybe take one for a test run since you just reach a new level?

Brak said:
@Pb_pal You could even consider going with a Barb merc for that zod. They are a lot more hardy and have way better AI than the Act II walking auras. Maybe take one for a test run since you just reach a new level?
Click to expand...

That could be interesting. If I ever decide that I don't want an Insight anymore, this might be an option. Certainly gets some style points!

Njord still on his way to 91 found a few more nifty items, another HR in the RoF and tried his hand at several crafts, which landed him some pretty good kit in the end.

I thought this has to be the best rare elite 2-hander that has ever dropped for me. What do you all think of it? I'll definitely consider giving it to an Act V mercenary and see how he does with it. Maybe use a socket quest to slap a LL rune in it too. Too bad the ED% and AR% bonuses are not for Demons instead of Undead.

Njord's new get there quick stick and 2 os shield courtesy of Pindle, which made teleporting past him and kicking his packs butt much safer and easier on /p8, until we shifted to full time RoF and CS at /p5.

One of the many gambled Coronets.

Might have to make a Fendazon with this weapon and gloves for my next random project.