Just wanted to fix the table. Hopefully, the problem with my game freezing has been fixed. Went 1 ½ hours last night without a glitch. I'll do some more updating along with some interesting finds.

@Smittyphi That is great news !!!

Ok so belgarath the windy is rocking his way normal. Level 30 and in the flayer jungle. Man it's slow going. Currently rocking a crystal sword with two tir in it for mpk and have stealth in a rubbish armour. My Merc is just about ready to use the savage bill i rolled for him. Had two uniques drop but nothing of great interest.

Is there a blue potion aholic group available? And does anyone know how to aim Tornados?

Basicbhoy said:
Is there a blue potion aholic group available? And does anyone know how to aim Tornados?
Click to expand...

That knowledge has been lost to the sands of time and the totemic records of the druids have long since faded.

Tornados are not to be aimed, they simply 'are'.

Hmmm, now I see why the druid is a close up caster. Can't miss if I'm standing on their toes.

Tornados can be aimed, just not with precision. Cast rate is important because you want that pulse damage ticking as much as possible.


Grape said:
Wow, this thread is so active! Awesome going all! And welcome to any new ones.

Quick update:
View attachment 11870
Coke has defeated Normal! Definitely not fast, but quite easy anyway. My main (and only) leveling spot was Pindle, who was nice enough to drop me a Spineripper, which should help venturing deeper into NM for quite some time. I'm keeping my eyes mainly on swords though, decided to go with my planned-to-be mastery from the start, cause I really want to save my respecs for later time.

Best drop of the normal:
View attachment 11872
Sweet! It was dropped from the special chest inside the hut in the Blood Moor, just outside the town. I definitely did NOT put this one into use, it was muled away. I haven't muled any items back yet. Not sure will I keep that way or not.
Click to expand...

As somebody who twinks with envy gear, I so love this jewel

Pb_pal said:
Tornados are not to be aimed, they simply 'are'.
Click to expand...

Yes, those blasted, sporadic Tornadoes were what ended it for me with Njord the Windy. They just got too frustrating for me and I had to retire him.

Basicbhoy said:
Hmmm, now I see why the druid is a close up caster. Can't miss if I'm standing on their toes.
Click to expand...

Yeah, this is my experience as well. Teleporting helps a lot with this.


Kitteh said:
Tornados can be aimed, just not with precision. Cast rate is important because you want that pulse damage ticking as much as possible.
Click to expand...

I think I read a poster, sadly cannot remember who it was, that said he made his tornados hit Baal twice. I wish I could do that!
F

Some more progress with Ric, now at two thirds of the level and counting down from less than 100m to go:

In terms of drops since 98.5, nothing useful for him but quite solid:

I've been meaning to roll another CtA to try and improve over his +3 BO, but until now somehow Nihl seemed to enjoy dropping Los and Jahs more than in the ~Ist-Ohm range. After the Vex drop above we did some cubing and went for a third try:

Above average at least, which is more than my Sorc could have said until her 5fth try even. When the Ohm dropped a little while after the Vex I considered rolling another one, but the +4 BO roll seems good enough for Ric so he'll stick with that. Hopefully soon and he will not have to worry about his life after all.

With the new CtA, and having dropped Gheed's for mor life SCs as stated in my last post, I reshuffled a little bit and swapped in BKWB for one of the two Dwarf Stars. He now has 3200 life, around 300 more than with the previous setup. For the highest damage CEs from Nihl, the mitigation provided by one extra Dwarf Star is ~230 (or ~340 when under Conviction), so the additional life pretty much balances out up to one really nasty CE. The advantage is the +2 skills from BKWB plus casting BC again. Overall it doesn't make much of a difference, but I figured in the long run the slightly higher PN damage will deliver the first corpse a tiny bit faster on average. I've been running with this setup for ~20m now without any issues so I think I'll stick to it.

Last update I had reached LK (but hadn't done the flayer dungeon yet). I was going to push through to Act 4 to get the skills from Izual, but I chickened out and went back to act 1. Rolled a map that's fantastic for the countess and might be above average for the pit, the layout is nice, but I haven't assessed the density yet, I'm hopeful though.

I'll probably mostly run the countess for a while now to get Treachery for the merc and the runes for Oath for myself. I'll mix in some pits if nothing else for the exp. I'm still running sub-50 on MF so I'm not counting on many golden drops, but at least that might help me find decent bases for Oath and a better insight for the merc who's currently running with a poleaxe. Thanks btw for the suggestions on oath bases.

I've improved my resistances quite a bit so I'm reasonably safe. A String or a stormshield and an Arreats wouldn't hurt though, but as I stated, with my current MF I'm not counting on any miracles there

My current problem is attack rating which is I think just shy of 7k or just above 7k with the enchant proc from lava gout.
I could respec to get more points into my mastery, but as I'm currently on the wrong weapon type compared to my planned endgame, I want to save that for later. I might do a respec for axes if that's the base I find for Oath while waiting for Grief but I'd rather find a decent sword base in which case I'll respec right away.

I'm not sure on whether to max masteries or not though, any suggestions there? If I haven't counted terribly wrong I guess I could max zerk, BO, Howl, and either mastery or shout and almost max the other of those two. I think I'll skip war cry which I seldom use so the uncertainty on how much can go into the last of the aforementioned skills basically boils down to how much I put into natural res and hork. But is it considered better to max shout or mastery for a HC zerker?

7K sounds nice. I'm at act 1 Hell too, and mine is far lower (typical for a WW Barb, I guess). I use Battle Cry a lot, which resolves most, if not all CTH issues. So as long as your merc doesn't have Reaper's, which CTC Decrep you don't want to overwrite with BC, I'd just use that, and your CTH should be fine. In that respect, I wouldn't put more points into Mastery if you still have to respec to another one.

Maxing Shout or Mastery for endgame depends, but since you'll be able to put quite some points into the one you don't max, I'd go for maxing Shout. It gives you more damage, while Mastery, at least at higher levels, almost doesn't give any additional CS and you might not need the AR if you use BC.
B

Mostly to stay safe now I just use Howl and Taunt though as I don't leech and really don't want to get swarmed, I mostly howl and run past most trash so having them feared when I run into a boss pack really helps with survivability. Maybe I should kill more trash just for the exp at my relatively low lvl (76 I think) but it feels more satisfying to do more runs than to kill everything one mob at a time.

Just realised I forgot to pick up those boots. They were obv godly tri-res.

Kitteh said:
To be fair, it is a grailer for me, somehow...
Click to expand...

My first and hopefully not last Sucells journey update...

Just finished Normal difficulty, much easier adventure then i've expected, Fury Druids seems to be much more powerfull then i remember or i might be slightly better player...Anyway Ball has been defeated and Cow area cleared

This has been only rune higher then Thul, during entire Normal adventure, but i guess Nightmare Countess will pay for it

Not much to say about journey otherwise, pretty straight run forward except few Countess, and lately Eldritch and Pindle runs

Started with Steel Large axe, replaced it with Superior Steel Large axe and lately by Steel Great axe...I'm really not Druid expert, but i guess that Oath in Eth Feral axe is something i need to aim for in the distant future, so already pumping Strenght to meet the requirement as early as possible, if necessary

As for starting at Nightmare, my resist were really bad, so i need to improve them badly...

So far, managed to improve them to this point

Back to CS/Diablo for me~

E: After trying it out... I'm thoroughly disappointed. I think a Lacerator on switch would be a much better/reliable approach. Thanks to @NanoMist for suggesting; and reminding me of the mid-flight weapon swap trick to proc Amp with GA. /E
Last edited: Dec 8, 2018

After a slow start due to not putting more than one point into any skill I decided to go for a FO/FB build for the initial playthrough. After that it will be Blizzard only for the first reset.

Morgana is currently lvl 53 and has done the Anya quest in Nm. After a long way to lvl 30 nightmare was a breeze, as it is for most characters. An 4os long sword enabled Spirit and an Insight was just made for her bodyguard (A2 normal, Prayer).

Next up are Mephisto and Pindle runs. Especially in hardcore I do not like rushing too much. Therefore it might take some time before Morgana enters hell difficulty.

Within the first hour of returning, these two dropped 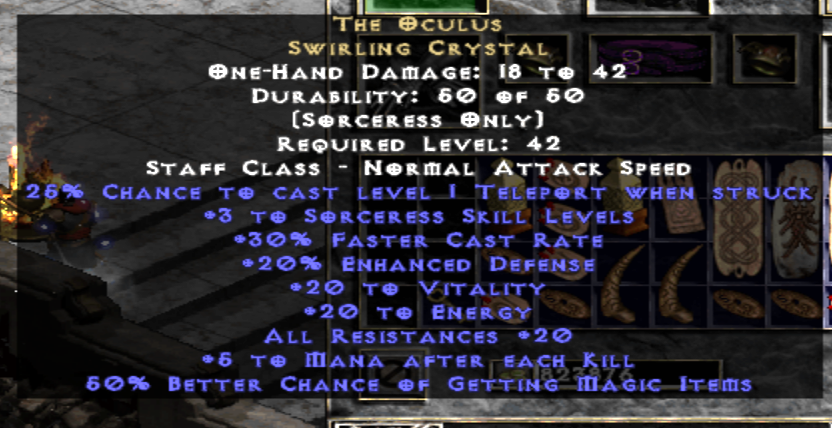 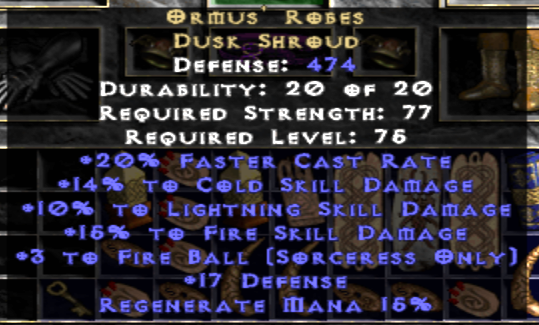 I could swap out the vipermagi and spirit sword for these two. I hate the teleport but it helps with killing speed.

this morning these two dropped. The sacred globe is kind of interesting. 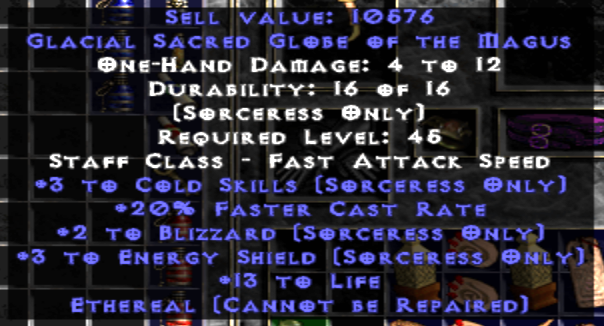