Find one, or get very good at playing ‘dodge’. I’ve gone that route before, and I’ve only had two deeds in four days, so it’s probably fine!

Should I consider using one of my quest sockets for this and putting an Amn into it?
Last edited: Nov 5, 2018

Nope. Socket quest is the one truly limited resource in this challenge; I suggest you save it for something you know you will be using till the end.

E: as a zealot; grief will be your end-game gear. No need to use a socket quest on something you'll replace later on.

Bewitch said:
And ancients are still open^^
Tonight and tomorrow nightshift but i guess ill finish it on tuesday

€ More like wednesday, got a meeting on tuesday, dunno how long it will take

That is some solid progress and overall fast journey. Good luck on the last stretch.

Definitely keep the quest! Personally, mine are being saved for Shako, Stormshield and Eth Reaper’s.

AlexTheNextOne said:
After having a second Duriel's Shell drop from my Hell Andariel quest kill, Orion, level 79, has smashed hard into a brick wall in Act II. There are simply far too many Returned minions with their hard-hitting Hollow One masters that I just can't take down packs of them without chugging my entire belt, since leeching is off the table.

I know I committed to a Zealot for this challenge, but man, it's moments like these that make tapping out and becoming a Hammerdin something to seriously consider.
Click to expand...

Should I consider using one of my quest sockets for this and putting an Amn into it?
Click to expand...

Also, @RIP - man, you've had a rough last couple of weeks. So sorry to hear about your losses. But chin up, get back on the horse, and use what you've learned to make you stronger!

sanguillen said:
Don't have screenshots for these, but my weekend consisted of:

So, a lot has happened since this last update (including a trip to Los Angeles and a bout with the flu bug that knocked out my whole house). I'll update the tote board later, but here goes with a summary: 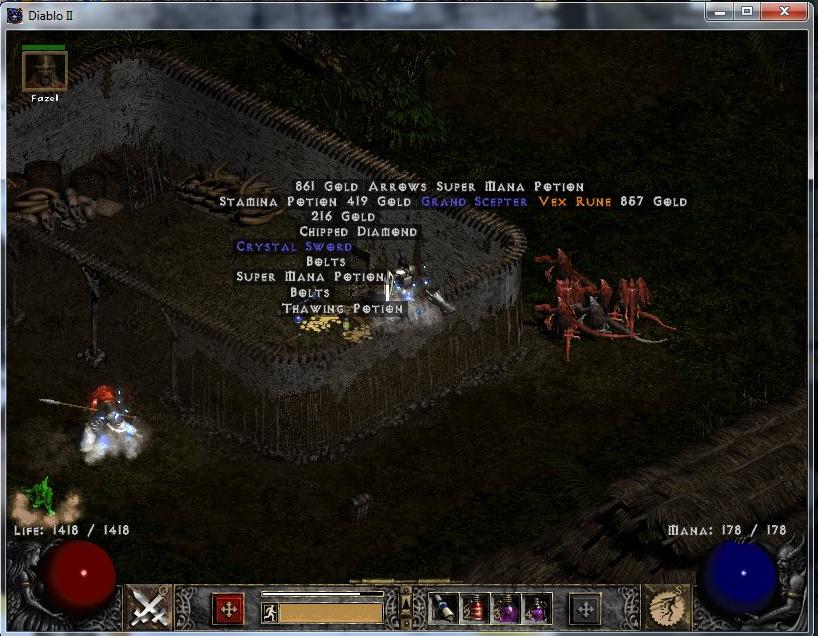 At this point, it was Horadric Cube time!

Time to make me some runewords!!! 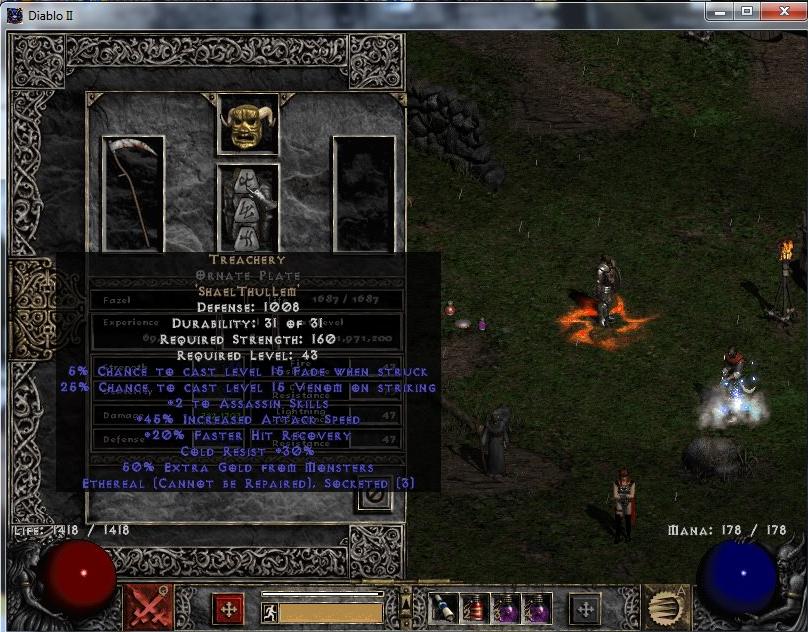 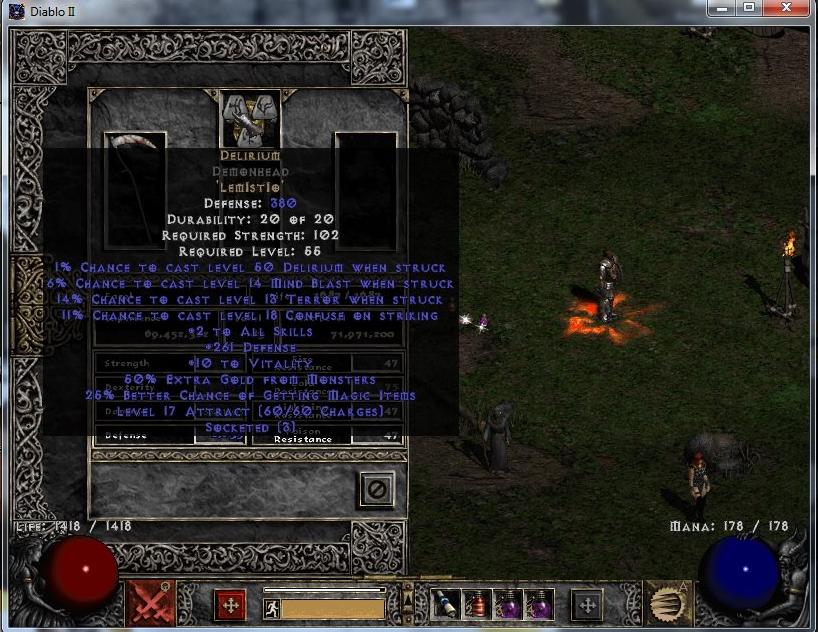 And a couple of little somethings for me: 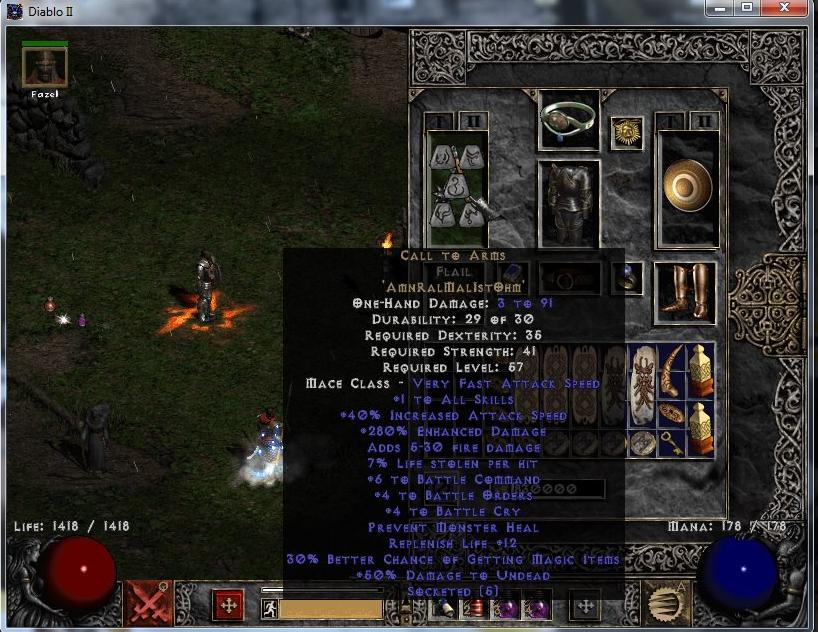 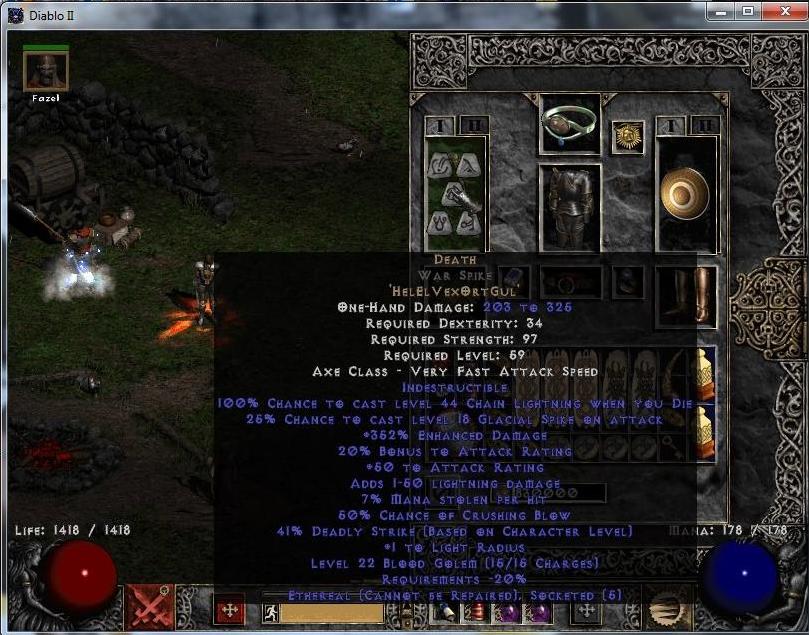 I'm pretty happy with the CtA roll, and the Death roll is slightly above average as well. That's it for the LK runs, at least for the foreseeable future - I don't wish to expend any more energy given my rather sad luck at the first 1,313 of them:

Now I'm left to decide whether to reroll my maps to get a better Pits map (with the downside being losing that great LK map if I ever decide to return). Decisions, decisions....

I always like seeing those marathon cubing sessions turning out decently. It always seems like so much input (runewise) at the time, but it's so, SO worth it.

I always like seeing those marathon cubing sessions turning out decently. It always seems like so much input (runewise) at the time, but it's so, SO worth it.
Click to expand...

It left quite the whole in my rune inventory, but as you said - it was SO worth it! And to be honest, I don't recall ever equipping a Military Pick, Crowbill, or War Spike before so there is that, too!
1

Just rip'd necro level 81 in Lower Kurast. Thought I'd paused the game but apparently not! Tabbed back to Diablo and was dead in one of the superchest huts. Really one of my more stupid deaths, although it's not even the first time I've done exactly this. I didn't even take a screenshot of the death sorry, you'll have to make do with a character select ghost.

I'd only found one Sur rune so I wasn't very far with this one. Not sure how much I enjoyed the necromancer playstyle to be honest, I might spin him up again or try something else next time.

You never stay outside of town even if pausing. Never!

@1have2much3time Hrmm, that was more of a condolence like... I don’t actually get any satisfaction from your characters death.

A lot of HC deaths recently. Condolences, @1have2much3time - may the next one make it to 99!

Wow, that was a lot of cubing, @sanguillen! On losing the map vs a good Pit map is there much you need from LK? If you're going to do a lot of Pit runs you'll get at least some runes from there.

Also watch the dropvideo, i was just talkin about that blizz, if they make a d2 remaster etc they would never do it like this that u never or nearly never find this or that item and then zod dropped haha

Well, i guess u guys know what the next update will be haha 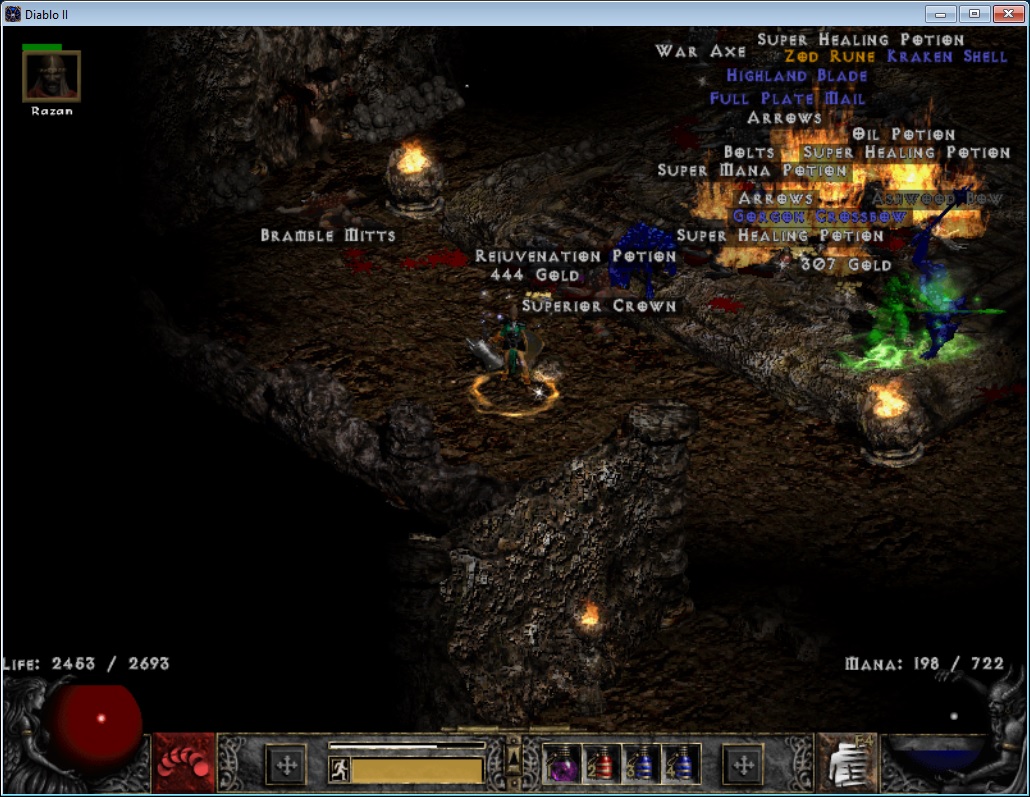 Another Zod at the SPF? Crazy stuff !! Although, they are just far more common than Cham, that is all .

GL on the last little stretch. Amazing pace. Keep it safe, will you?
F

Meant to post a bigger update on Ric when at 98.25, but decent drops kept coming so let's settle for 20%.

Smooth sailing again after his odd death recently. Not much to report as far as runs themselves are concerned, though I'm still trying to find a few tweaks, mostly regarding use of curses, to squeeze out a second here or there. In terms of drops, his facet streak continued with three more dropping in quick succession, as well as a couple of juicy runes.


Another interesting circlet for a teleporting Bowie.

Quite happy about this one, eth and good MF roll.

Another Jah and Lo. Still looking for an Ohm for another CtA try though.

While nothing spectacular, he's got a number of further nice drops (no screenshot due to 10 picture limit):


Btw fun fact: To this day he hasn't found War Travs!
I'm getting buried in work currently and was out of town visiting friends for the weekend, but happy with the pace so far. Hopefully I'll find the time to keep it up and Nihl doesn't get too boring any time soon.

1have2much3time said:
Just rip'd necro level 81 in Lower Kurast. Thought I'd paused the game but apparently not! Tabbed back to Diablo and was dead in one of the superchest huts. Really one of my more stupid deaths, although it's not even the first time I've done exactly this. I didn't even take a screenshot of the death sorry, you'll have to make do with a character select ghost.
Click to expand...

Ever since finding that Lightsabre, Hell has been going rather swimmingly. Offensively, Orion has become a high-powered buzzsaw (as opposed to a low-powered buzzsaw? I guess they're high-powered to begin with?) that's cutting through nearly everything he comes across, save for Stone Skin PIs, which takes a bit of time. The Life Tap wand advice was great, as well.

Hell Mephisto was a relative breeze, it was actually the slog through the Durance, particularly level 2, that was the tougher task here. Or until Bremm Sparkfist spawns again with some kind of FE/LE/Conviction combo that strikes fear into the hearts of men.

I have a few questions about going forward at this point. While I feel confident I can continue through to Act IV right away, I'm wondering what my options are, and if I should gear up, and if so, where.

Here's what I'm rocking right now, and it's been serving me well (except YOU, 73 lightning resist *eye twitch*). Lightsabre (dog bless that ignore target defense), Ancient's Pledge akaran rondache, Duriel's Shell, Guillaume's, The Mahim Oak Curio amulet (not much luck with amulet drops, honestly), Lava Gout gloves, good ol' trusty Tearhaunch, String of Ears, Raven Frost, and a rare ring with 5% life leech, +7 all resists, and a hefty +15 to Dexterity. Block chance is about 60-63, and my ever-impatient merc is rocking a Vamp Gaze, Duriel's Shell, and an Arioc's Needle, for lack of a better weapon.

That's a pretty short distance to the Durance level 3, and has me questioning what to do from here. Should I try running Hell Meph to gear up, after finding some kind of item that gives me Teleport charges? What's the best way to find such an item? I would really love to be able to avoid the council members on the third floor.

Or should I try out some level 85 areas/The Countess instead? I figure I could rip through places like The Pit and The Countess's tower at this point, and get some decent runes in the process. Sure, having to walk everywhere sucks, but that's Paladin life.