I think that Shako is better - the +2 to BO is always appreciated as well.

Im new here and i just started a hc sorc for that, without ladder runewords.

S/U is how many sets and uniques you have found, but don't worry about it, most people haven't bothered

And I just have to say again how great those Nihl videos from @ffs are. The Mac seems to make a difference on S&E times, and the gear and technique is so impressive.

And @Ashenshugar - unless I'm missing something, Natur isn't in the table. I think level 96 is a big enough occasion to add him!

To add a little more to the discussion with @Yng - as you noted, it's all about testing, but that assumes you have multiple respecs available, which it sounds like you don't. So here are a couple thoughts from my experience with Hiatus (and Mercy for Nihl runs generally).

-As @ffs noted, p1/p7 Diablo runs are an option. I actually did a fair bit of that with Hiatus after the mishap and early on when I got annoyed with successive LI Nihl runs. In total, Hiatus probably got only ~20M from those, but it wasn't much slower than Nihl given her gear limitations for pure lightning. The real issue was rhythm; I just found it much easier to settle into the quick Nihl runs than the longer and slightly less predictable Diablo runs. This is why I focused exclusively on Nihl fairly quickly, despite the early dabbling and thought I might use Diablo runs as a change of pace.

-For Blova, Hiatus was pure Blizz with Death's Fathom, CoH, and Shako and 5 skilllers. Nihl dropped quick when not CI, but I couldn't deal with the number of unbreakable CIs and the longer times and risk involved with taking down a breakable CI. Like you, I had only one respec, so didn't give Blova a shot. But I think it would still work with slightly less top-end gear than @Pb_pal 's Eleanor had.

-On the iPDR question, thankfully this is something that you can test with a build, shedding safety gear as you get more comfortable and going back if things feel unsafe. But my view was that the faster Nihl drops, the safer the character will be. In general I didn't have iPDR (except for Hiatus with Nature's Peace), and I didn't notice the difference and am pretty sure it would not have mattered for the death each experienced. The longer you're standing around waiting for Nihl to drop, the more chances something can go wrong!

The things that led to each character's death from 98-99 were straight-up mistakes in nasty situations, and the iPDR wouldn't have made enough difference to change the outcome. I found there was plenty time to bail (with the finger-on-Esc technique @ffs notes) for regular vipers or even might/fanaticism vipers, assuming the character somehow finds herself in the green clouds (which is a mistake to begin with). It's only not enough time if the character is also amp'ed (which is generally a mistake to have not bailed already, so a compounded mistake). And I don't think 55 iPDR would change that significantly - the hit points just drop so fast in that scenario.

So my general philosophy was (1) don't teleport once the character hits the "landing spot," using the step-sideways technique (2) with the corollary of always running to pick up drops to avoid getting in habit of teleporting and mistakenly ending up in a green cloud, and (3) bail immediately (a) when amped and not secure in the landing spot with Vipers around, and (b) with Might and lots of witches around if merc's confuse doesn't trigger immediately; other scenarios were played by ear, but I wasn't shy about bailing.

I think, in total, that most runners will be faster over ~11.5k runs with more offensive fire power to take down Nihl quicker at the expense of bailing a little more frequently in situations where iPDR gear would allow a completed run.

But that's why we test, and ultimately it's about comfort level and what works best for each player. I look forward to seeing how it works out for Sophie!
Last edited: Apr 24, 2018

Loving all the suggestions, thanks for the feedback. Honestly just ready to move on from CS, so I’m hoping to stay away from P1 Seals/P7 Diablo if Nihlathak works out.
F

@Bewitch Very cool, welcome! Looking forward to reading about your progress. Definitely quite the challenge, but surely doable! You've come to the right place, lots of great information and experience in here that will help if needed.

@PhineasB is spot on I think. Just as a last point that's obvious but still easy to forget, the most important thing is running with what you personally want to run. If you enjoy running Blizzard, that's the way to go irrespective of gear. If you're tired of it and want to try Lightning or Fire, that's better also without Griffon's Eye and lack of skillers, etc. -- The real challenge here is to not get bored and lose motivation over the duration of ~11k runs. That's the biggest obstacle to progress, much more so than limited gear options, or deaths even.

@ffs - Your loading times make me extremely angry. Carry on.

Huh, just played to hell today, made some andyruns (and will go on with some more) and the first useful unique beside gheeds: 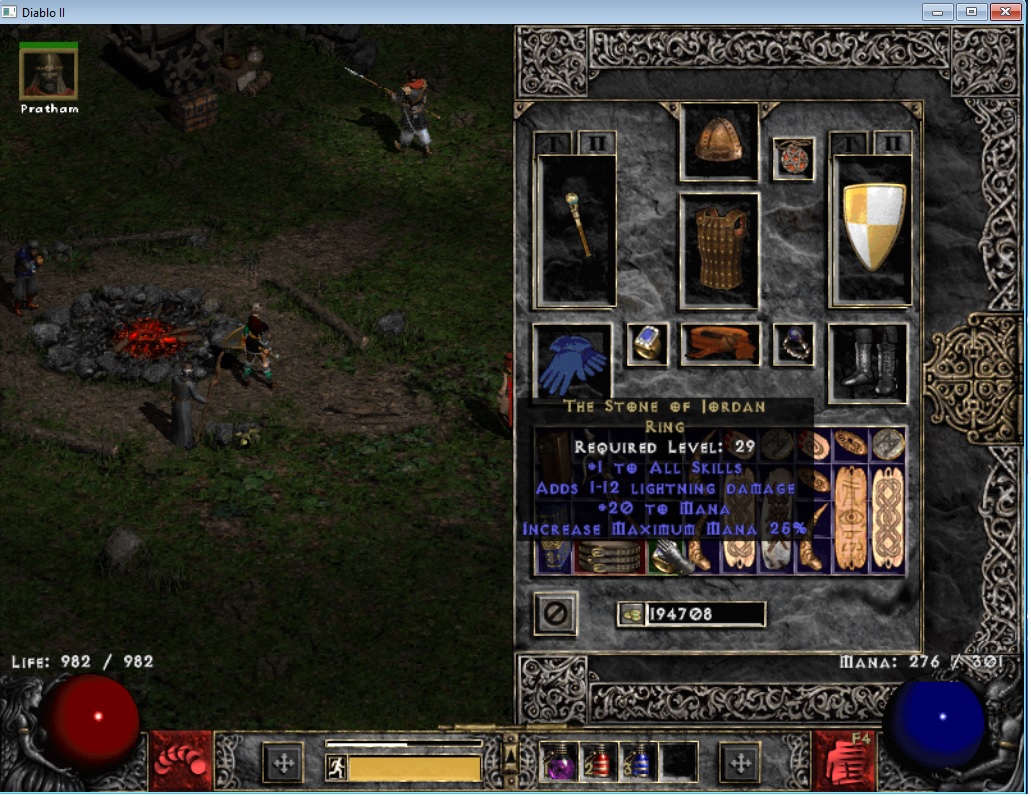 Nice drop to start things off @Bewitch! Took me quite a few dedicated Andy runs at a later stage to get the first + skill ring.

@Pb_pal Haha yeah she has sort of an unfair advantage. It's a love-hate relationship with Nihlathak generally. Painful early on, but not suffering that S&E delay most people seem to have, and the map is amazing with two shrines on her direct teleport path. Also while I was confident that a Griffon's/CM setup would be a strong option for Nihl, I had no idea she would deliver this kind of unheard of numbers.

@PhineasB I don't want to mess up the table.

Those are the things I'd add.

@Bewitch An auspicious drop. Hope for many more as good as that!

Updated to include Natur! Another level 96 character is good to have on the table

Phineas, you have to let the children learn early in life!
F

HelpYourself has gained another 15m XP since the weekend, now past the 98.8 mark. So close!

She found an unexpected upgrade when she finally rolled a third skiller. Of course, also the third plain one. But happy nonetheless, no idea how many GCs she's rolled... She's using it of course, despite the cost of ~100 life after BO. Haven't decided yet, but she might drop War Travs (and MF altogether) in favour of Aldur's and a higher life setup for the last stretch.

Generally, this has been a very nice strech in terms of drops:


After a rather long drought regarding high runes, she started off with two Surs in quick succession. Those will help with the "twinked by untwinked" sept I'm planning.

Second Schaefer's Hammer. Now how about double Schaefer for the Frenzy Barb in my upcoming sept.

Another BKWB. She now has three of them as well as three SoJs.

Hoping to finish her before RFL round 3 starts, which should be possible unless I do something stupid. 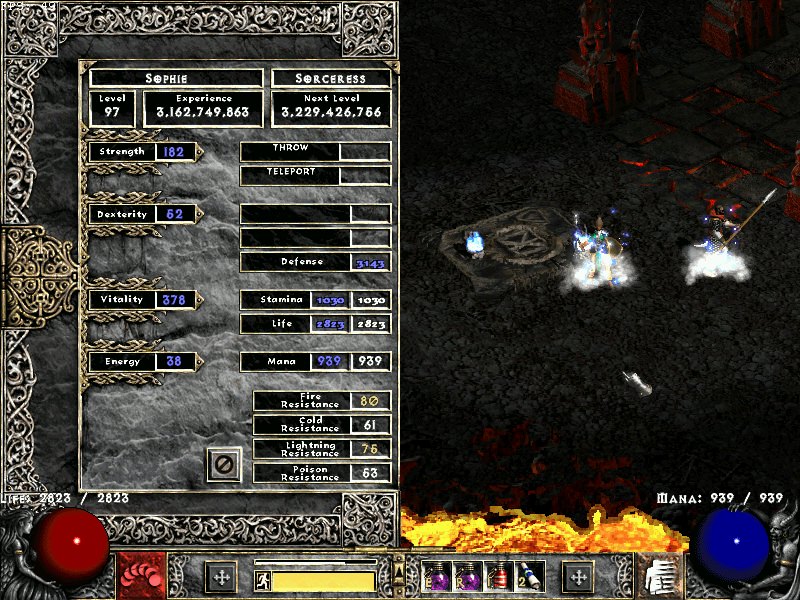 Pleased to say that the rune drought has ended as well with Mal, Mal, and Pul.
Oh, I almost forgot, this beauty as well: 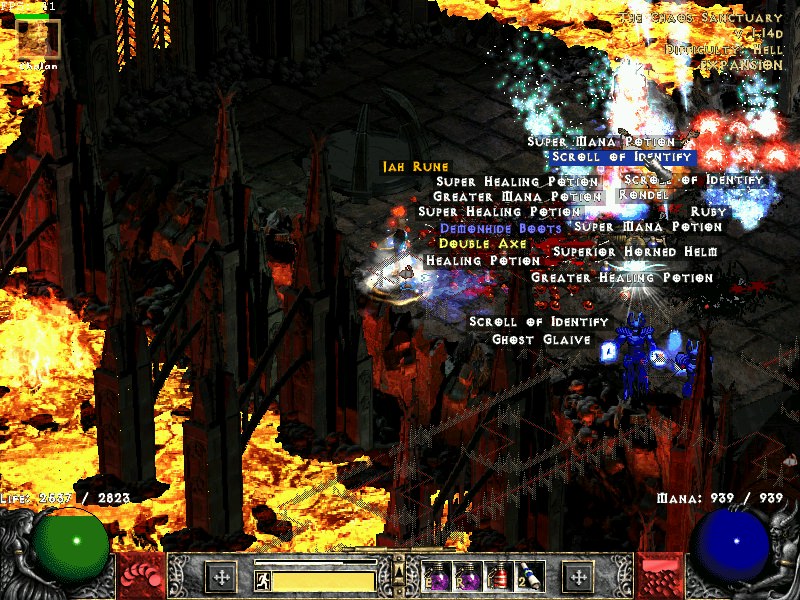 Kitteh said:
Phineas, you have to let the children learn early in life!
Click to expand...

I don't know, with a level 96 untwinked character, a forumite can hardly be considered a child anymore (especially one who joined the forum more than a decade ago) or things early by any standard!

I consider myself young at heart. Thank you for the help.

Great progress everyone. I wasn't sure what to do after I finish that last hour on round 2 of the RFL: doing some Infernal Pit chest runs, continue my Sept Paladin, try my Venomancer at Travincal or continue my 99er. Seems like people are telling me I'd better do the latter ...

@PhineasB About the Spiked Club ... Maybe @ffs has the same deficiency in his brain as I have, always thinking it's a special item (for some reason I always think it's a TC3, even though I know it's not, but the regular unique Club is)? Otherwise my guess is that the cursor is pointing to the place where his third Zod dropped, right after he picked it up ...
F