I have been planning this project for a while now, so I guess I should get it started. I have always preferred to play caster type builds in D2. This project will help me to play builds that I have never completed the game with. This thread will be used for all planning, theorycrafting, and updates as I make progress with the sept.

Rules:
1. All characters will be twinked SC characters that play through the game at a minimum difficulty of P7/P7/P3.
2. All builds will need to be viable from the start without using a "starter build" to get through the early difficulties (ie. no using fissure to fly through normal before using a respec to your actual build).
3. Respecs are allowed, but only to retool stats once twinked gear is available.
4. All quests in all difficulties will be completed before the character becomes a Mat/Pat.
5. The builds will try to relate to the BG character in some way.

Let me introduce you to the members of the Sept, fresh from the Forgotten Realms. I haven't made up my mind on all of the builds yet, and I am open to suggestions if you have fun builds in mind.

Amazon - Imoen - She will be some kind of bowazon, but I'm not sure what kind yet. I was thinking strafe/FA. It seems like it could be a fun build, and it makes sense with Imoen being a mage that uses bows.

Assassin - Alora - I am really up in the air about this one, but I am thinking some kind of kicksin build. I have never made one before so I am open to suggestions.

Necromancer - Edwin - I am thinking that a bonemancer would be a fun build and fitting for Edwin. I haven't played this type of character since the Marrowwalk glitch, and even then I never finished the game with it.

Barbarian - Minsc - He has to be a berserker. There are just no other options in my mind. I am thinking of doing the version that has a bunch of one point wonders instead of fully maxing berserk damage, but I'm not sure yet.

Paladin - Ajantis - I hate to admit this, but I have never finished a fanaticism zealer. I have an eth Reaper's that would be really helpful on an A2 merc next to this guy. Since a zeal paladin was the first character I ever made in D2, I think this needs to be finished.

Sorceress - Aerie - She is the one that started this whole idea. I wanted to make a dedicated LK sorc, so she is in A2 hell as a light/FO sorc.

Druid - Cernd - He has to be a shapeshifter. I was initially thinking of making a fury druid, but I am worried about this being too similar to the zealer. I was also toying with the idea of a fireclaws bear. Either way, Cernd will cross the finish line in some form that is not human.

I was planning on doing pretty sparse updates, but some people seemed to like the more thorough updates I was doing in the Three-Way Redux tournament. If anyone is interested in the same kind of write-up so you can follow along with these characters, let me know.

I think that's an awesome idea! Baldur's Gate 1 and 2 will always have a special place in my heart.
Looking forward to see your progress and thoughts.
E

Go for the eyes, Boo. GO FOR THE EYES! RrraaaAAGHGHH!

A thumbs up from

... and posthumously from Abidalzim, the 87 bone spirit necromancer.

Shuffleblast said:
A thumbs up from
View attachment 12785

... and posthumously from Abidalzim, the 87 bone spirit necromancer.
Click to expand...

Let me get this straight. Nalia, the whiney, spoiled, rich-girl mage, made it all the way through Hell difficulty. Abi-Dalzim, the brilliant mage who invented the devastating spell Horrid Wilting, was somehow killed. I knew there were bugs in D2, but that is just unforgivable.

smloeffelholz said:
Let me get this straight. Nalia, the whiney, spoiled, rich-girl mage, made it all the way through Hell difficulty. Abi-Dalzim, the brilliant mage who invented the devastating spell Horrid Wilting, was somehow killed. I knew there were bugs in D2, but that is just unforgivable.
Click to expand...

Once I posted this idea, I got pretty excited about getting started on the characters. Since Aerie was already in A2 Hell, I just wanted to push her until she was a Matriarch. I wasn't having as much fun with light/FO as I was hoping, as the build just felt like an underpowered blizzballer or meteorb. I decided to finish the game as quickly as I could, only killing necessary targets and boss packs as I saw fit.

Man does it feel nice to be back in the world of SC. I was able to fly through the rest of A2 and A3 without a care in the world. I decided to skip all WPs except LK and Durance 2, so that really made A3 fly. After playing HC with gear and skill limitations, this was wonderful. I also notice the difference in my play quality after spending so long in HC, which is a nice takeaway from the long tournament. It wasn't long before Izual was dead, and I was ready to claim my reward from the forge. 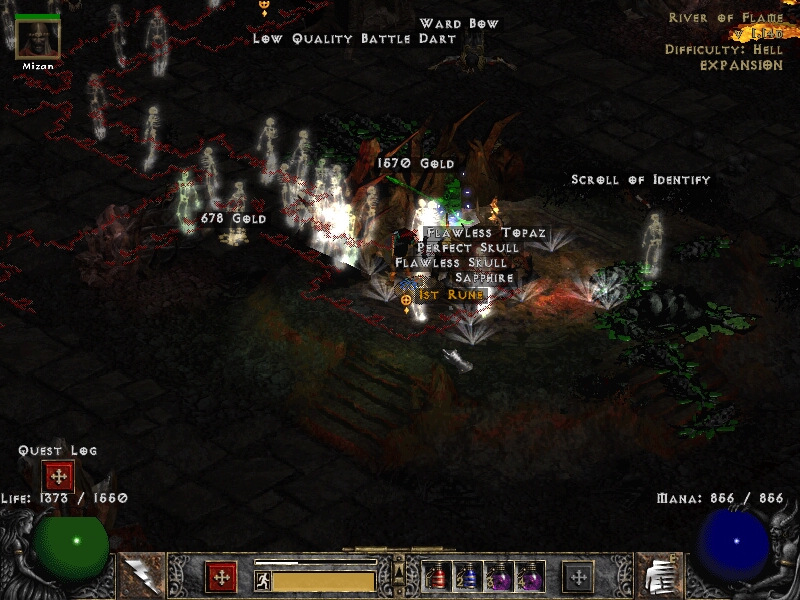 It is always nice to see an Ist rune. Also, after my last 3 Hell forges resulted in 2 Fal and a Lum, it was a welcome change of pace. Aerie used this motivation to cruise through the Chaos Sanctuary and put an end to the Lord of Terror. 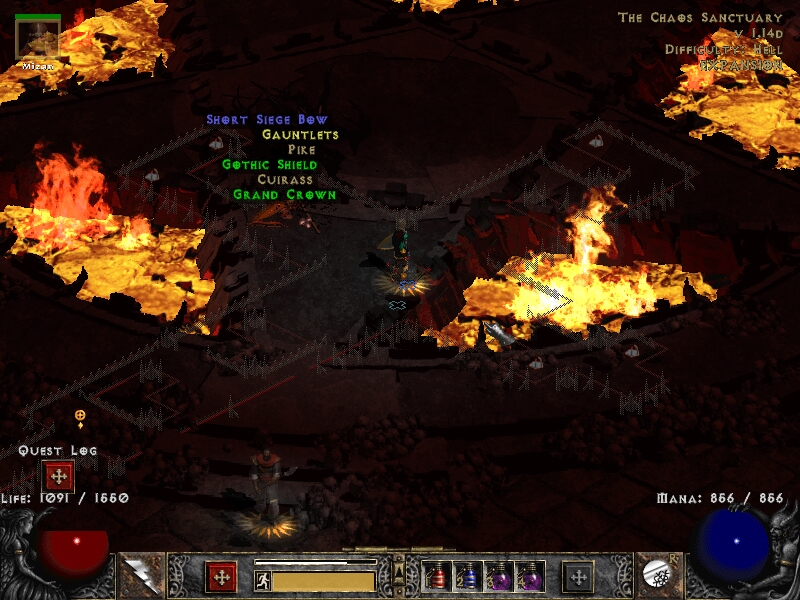 A5 went really fast as well. I was still skipping a lot of WPs, and I forgot how much time it saves when you aren't scanning each area for the WP. I did get a little frustrated when I got to the ancients. They killed my HC sorceress because they refused to split up, and a stray throwing axe combined with a well timed whirlwind did her in. This time, the ancients obediently followed me one by one to an isolated corner of the map and died. Aerie took out her frustration on Baal, and he didn't last long under her fury. 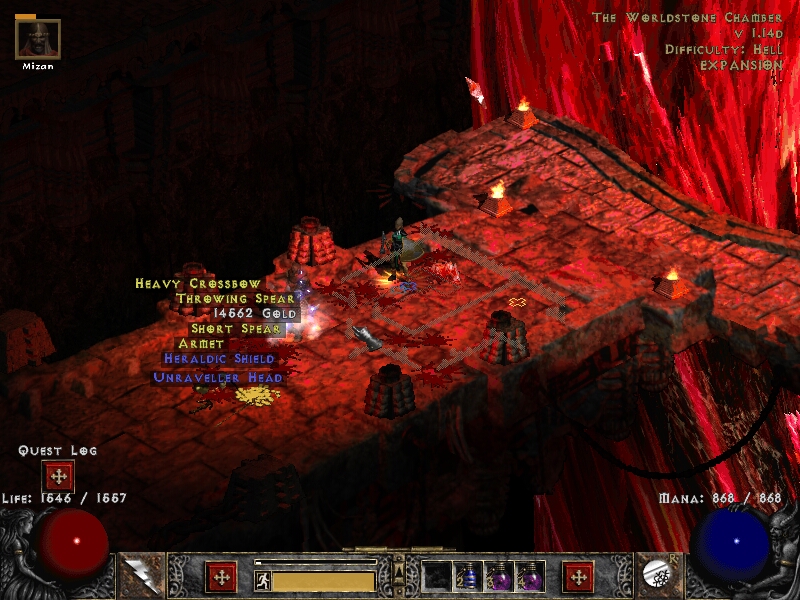 I then used her first respec to turn into a fire sorc. The plan was to do Pindle/Andy runs on P3 until she got to the upper 80's or even low 90's. This plan quickly hit several snags. First, without an Infinity merc, Pindle's mob on P3 was taking too much time. The second problem was that the FIs around Andy were making her kills really dangerous and messy. Finally, I couldn't justify missing out on several items from Mephisto just to have a slight increase in my chance at jewelry (although I did find 3 Gheeds in my short time with Andy).

Basically, I chickened out and went back to something very familiar. I respeced into a blizzard sorc and rolled a 2 teleport Mephisto map. You might not believe it, by my Pindle map in the same seed was the best I have ever seen. The runs were going OK, but my merc couldn't handle Mephisto very well. I was doing the moat trick, but I didn't like how much time it was taking. After switching to an ethereal Blackhorn's Face and an ethereal Reaper's Toll, the merc could tank long enough to let me get the kill. From 82-85, she had a few good drops. 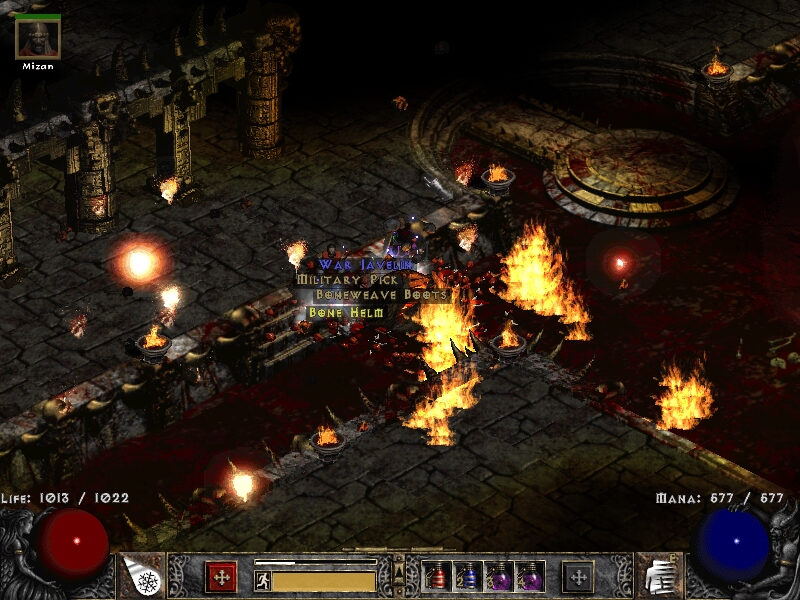 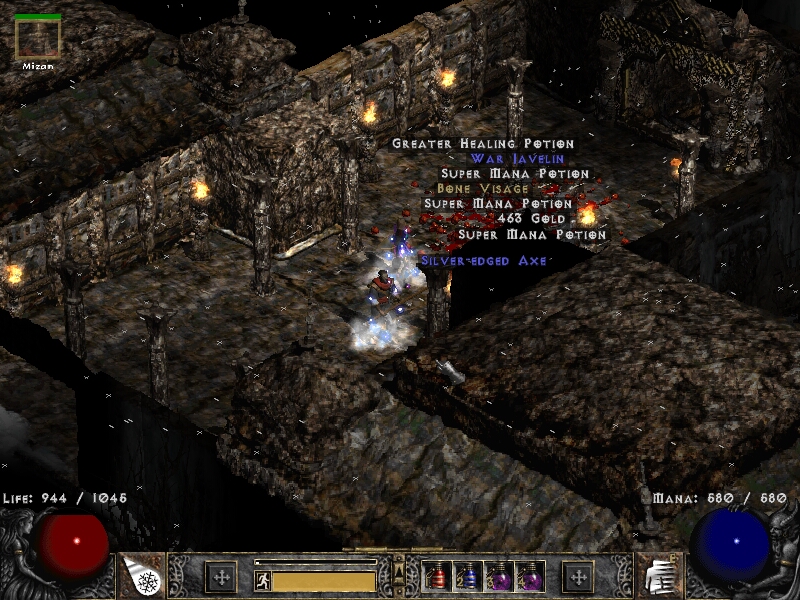 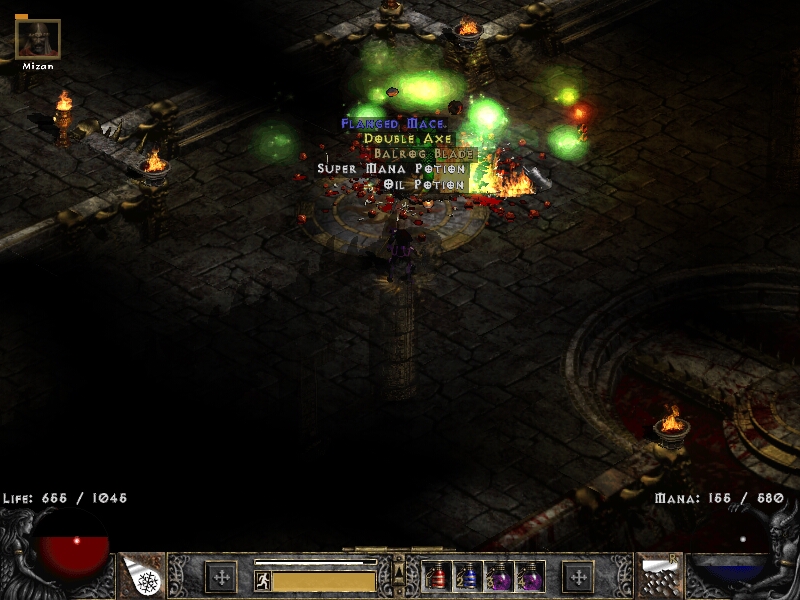 Code:
Then it happened. A moment that I have been waiting for since I started seriously doing MF runs. It finally dropped. 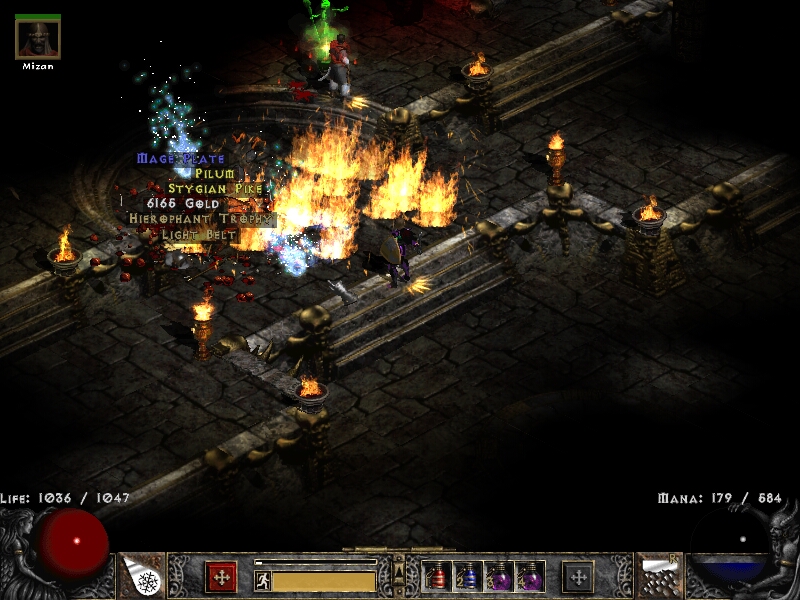 OK, I realize that this isn't a huge deal, but I have been seriously frustrated by my inability to find a Homonculus. I found a Darkforce Spawn and 2 Boneflame before this guy showed up. Since I now have all of the endgame equipment assembled, it is time for Edwin to head out into the Blood Moor. This should be a nice break from Pindle/Meph runs as Aerie heads towards level 90.

Aerie has been making steady progress towards level 90. She isn't too happy about the prospect of being permanently stuck in Lower Kurast, but she is trying to have some fun while she is getting there. She went from 85-** doing mostly P1 Mephisto/Pindle runs. There was a short stint where she was doing P3 Pindle alone, but the drops were really lacking. Also, I am missing too many exceptional/jewelry uniques to pass up on Mephisto's drops. The strategy has been working well, and I have ticked several items off of my grail list.


Code:
Mephisto also dropped a Gul rune which was a nice surprise. I think I will stick with Mephisto/Pindle until she hits level 90. I then plan to start the process of rolling a Lower Kurast map for long term farming.

In between the runs with Aerie, I have started playing with Edwin. I was going to include an update for him, but he will not allow it. I believe he said, "I will not allow a simian of your embarrassingly low intellect to speak for me in public." Apparently Edwin will be writing his own updates when he has time.

I was planning on each character writing their own updates, but I have run into a bit of a problem. Playing with Edwin is incredibly fun, but being twinked really eliminates the challenge. None of the finds really matter, because his equipment is lightyears ahead of what he can find. With little to no chance of dying and the ability to steamroll P8, it doesn't make for a very intriguing story. I think I am going to stick to simple updates, and not waste time writing a story that is not shaping up to be worth reading.

After abandoning cows, I returned to this project. I started running with Aerie again, and she made it to L89 and put a good dent in the next level. Meph and Pindle must have been glad to see me return, because they quickly ticked off several grail items to celebrate.


Code:
I also got 2 more Arachnid Mesh and a handful of other useful drops.

Edwin is finished with normal and just rescued Cain in NM. He has been a blast to play, but is having almost no trouble on P8 in NM. I am still loving the build, and I look forward to the challenge of P3 hell.