Suggestions for building a Zon using this item?

Hello all, I just found this on NM when killing the big D. Even chanted, and with maxed damage frozen arrow from an upgraded Raven Claw, he was quite the stubborn foe on /players 8. 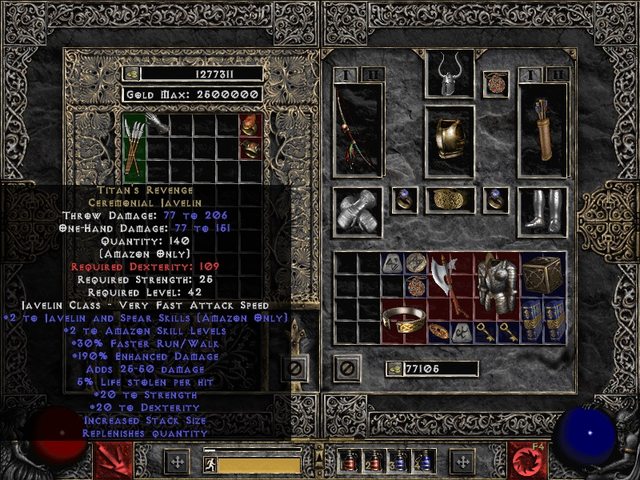 As the thread title says, what suggestions for a build can I get, so that I can make maximum use of this item? Please refrain from advice concerning gear, as I most likely don't have any of the items that would make it onto such a list, and just tell me what skills I should invest in, and perhaps some tips for how to play an Amazon that doesn't use a bow.

Up to now, I have always played bowazons, and am not really all that good with them, mainly relying on chanted Raven Claws and sticking to normal and nightmare difficulty settings, so comments on things like resistances and life/mana stealing are needed.

Titan's are end-game gear for javazons, usually upped for more damage... yours have a good damage roll (150-200% possible), but a bad leech roll (5-9%). The FRW is great for herding (running around to get the mobs to clump up, for Plague Jav/Lightning Fury; or to string out for Poison Jav/Lighting Bolt) and the fact that you can use a shield with javs makes it much easier to get good resists compared to a bowie/spear zon

Thanks! I never really knew that I could use a shield with jav's, so that makes a huge difference by itself. I used to play Necromancers in the secret cow level all the time, back in the day, and loved herding the hell bovines into massive crowds for the following CE spamming, but that was back before they nerfed CE, both in radius and scaling.

I know that I played around with a javazon way way back, but don't remember much more about it than that I did it. Back in whatever version I was playing at the time, the Plague Javelin left an expanding trail of poison damage in it's wake, but I'm not sure what the Lightning Fury skill looks like in action. Do all gear work with weapons like this one? For instance, I have a rare circlet that has 30% enhanced damage as one of it's traits. Does that work on these TR base damage, or also the spell effects, as well? Or does ED from a circlet not help with these at all?
Last edited: Jul 26, 2019


Off-weapon +%ED is applied to physical damage, not elemental damage. It works essentially the same, but is calculated differently than +%ED on the weapon itself. To boost elemental damage from skills with gear, you need "+X% (Cold/Fire/Lightning/Poison) Skill Damage". Only a few S/U & Runewords have these effects, though. Much easier to stack +skills & pump synergies with highest bonus, typically.

Enhanced Damage only affects physical damage, not elemental damage. ED on a weapon directly increases the weapon's damage, while off-weapon ED (like your circlet) will add with skill and stat ED to increase total damage. This means off-weapon ED typically makes less difference than on-weapon ED, especially with skills that provide a lot of skill-based ED, like Impale or Berserk, or on a build that gives lots of Stat-based ED.

Ah! Not too clear on just what the differences are between on and off weapon ED actually are, but it is good to know that the circlet is not going to just straight up make a +70% ED weapon into a +100% ED weapon. How do Jewels and Runes stack up with ED from armor items? Specifically, I have a jewel with 22% ed on it, and I also have some with +minimum damage. How do those traits work with the 30% ED?

When playing with a companion character in the game, what is something that would help the most? Right now I only have 5 of my 8 computers up and running with D2/LOD, so am limited to a playing character, my chantress, and up to three others. It sucks only having the ability to control/use one guy at a time, but I find that big arua paladins can be helpful even if they are a pain in the butt to painstakingly move into position nearby. Baal runs are easy, just make a tp outside, and then bring them in before starting the waves. I haven't done that offline yet, and its been years and several versions since I did that on b.net, right now I have just the two Paladins (Both finally 75th level), a single Necromancer (73rd level minnionmancer) and an 82nd level bowazon in addition to the 81st level enchantress.

I thinking that at least one of the Paladins is a good bet, and am open to suggestion on what aura they should use during Baal runs in the throne room.

Either way, I could bring these guys into the room before clearing out the last monsters, but would holy freeze be better/worse than salvation? Would cleansing be better or worse than Meditation?

So, what skills should I invest in, to make a Javazon, that will be doing 8 player Baal runs either with or without other companion characters in support?

Void Stalker said:
Ah! Not too clear on just what the differences are between on and off weapon ED actually are, but it is good to know that the circlet is not going to just straight up make a +70% ED weapon into a +100% ED weapon. How do Jewels and Runes stack up with ED from armor items? Specifically, I have a jewel with 22% ed on it, and I also have some with +minimum damage. How do those traits work with the 30% ED?
Click to expand...

I believe that the damage formula, is, very roughly:

DariusTriplet said:
I believe that the damage formula, is, very roughly: