In my second Pindle Haul I found an ethereal Astreon's Iron Ward with above average damage rolls. At the time I knew it was quite the rare drop, with ethereal chances being 1 in 20 on top of Astreon's status as one of the rarest uniques in the game. It'd be a shame to leave it unidentified and collecting dust in the stash, so why not take it out for some fun? Before I can do that, I had to make use of another rare drop from quite a while ago. 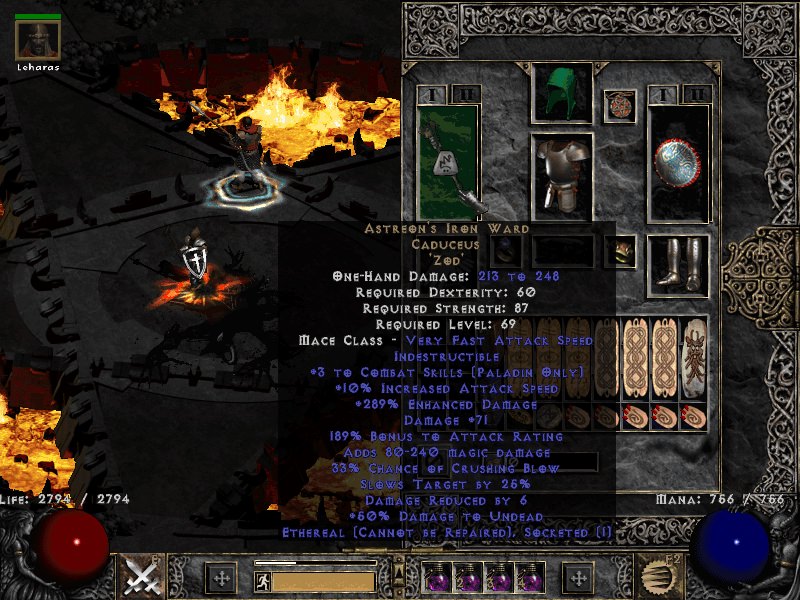 +3 Combat Skills is a middle roll, but I'm not holding my breath for a +4 version with above average damage stats. The 289% ED is 1% off from perfect, and the +damage is decent too. The bonus to AR, 33% CB, and slow target are all nice additional melee mods. Damage wise, it's not a top Zealot weapon, but it can hold its own while providing +combat skills on the Blessed Hammer side. To top it off, there's the giant hammer graphic and the lovely hit sounds.

Here's how I built around Astreon's:

The idea is to use the Concentration Aura from Pride for both BH and Zeal, thus allowing native Fanaticism. I elected to drop the remaining points into Sacrifice for damage, but spending some points into Zeal for AR would be a good choice too. The build is very Merc dependent, both Zeal and especially BH getting a large chunk of its damage from secondary auras. The Merc himself survives well enough- even with Pride's lack of on-weapon ED, there is enough off-weapon ED between Fortitude, Might, Concentration, and Fanaticism for respectable damage and life leech.

Guillaume's Face would be better for Zeal, but Shako was a better balance between Zeal and BH damage, not to mention all the other nice stats. Additionally, I'd need to commit another Cham rune, unless I went with a Raven Frost setup. Cham Guillaume's and CoH on the Merc is also another option, and I can even helm swap with the Merc when desired. 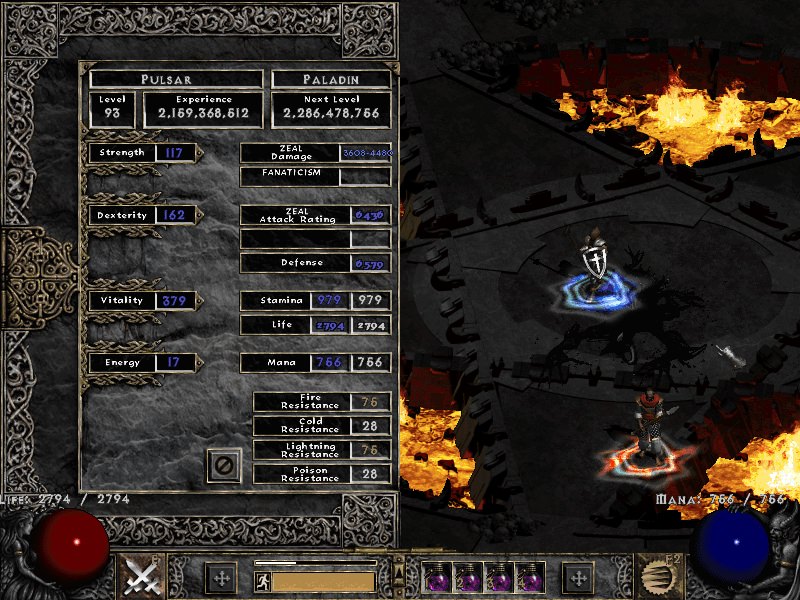 With Redemption as an option, dual leech ring is more of a preferred choice, rather than a mandatory one. Big loss is the +350% demon damage and 50% Fire Resist from LoH, which is the main reason I went with the Cham Shako setup. Having such a Shako already available definitely helps too.

Game-play wise, both Zeal and BH wreck hell on lower player settings, so I prefer mostly zealot play in this scenario. I use teleport to position zeal as well, especially against ranged monsters. PI's are cleared even faster with BH. Once I turned on players 8, BH sees more use as zeal effectiveness drops off. Large/dangerous mobs get the hammerfield, with 8k hammers at 75% FCR being potent enough. Zeal for smaller mobs and smite against bosses, with BH as the finisher when CB becomes less effective. I rarely use redemption as I can switch to zeal and leech off the stragglers. Everything considered, this is a fun character to play, with both Zeal and BH offering two different yet effective play styles in one package.

Very nice use of a very rare item and shiny rock! This is a very interesting hybrid given the core item.

Agreed. Very interesting and stylish character, which also sounds like a lot of fun !!!

Thanks for the write-up.

Level 93 is quite high. Where did you level after finishing the game? Chaos Sanctuary I assume?
F

Nice idea, very similar to the eth Death Cleaver hybrid Zealot I'm making next in my sept. Though I'm going to focus on physical damage much more, especially considering for questing he won't be able to use the 2/20 amulet that's going to be part of his end game gear.

Interesting to see you hybridising with BH though, I ruled that out due to the amount of skill points required. But the Pride Merc route seems to be a viable option. I was planning on using Infinity since it helps both FoH and solves AR problems due to not using Grief. Did you have AR issues or was it OK?

Cool use of the Ethereal Astreon’s. In fact nice to see any Astreon’s in use.

I have an Eth one too, I will have to check the stats. Need to find another Zod first though.
T

Old skool kool
When was the last ethereal Asteron's that was used on a char in the SPF. I can't remember any. Maybe a 'sin used it for Blade Fury somewhere.

Great build and nice write up.

I had a caster/zealot hybrid build in 1.11 but the caster focused on Holy Bolt as the caster element for variety, so I like the build. His gear is nowhere as good the stuff Pulsar has

Very cool! Awesome use of a wickedly rare item.

T72on1 said:
Level 93 is quite high. Where did you level after finishing the game? Chaos Sanctuary I assume?
Click to expand...

Most of the initial questing was done with strictly hammers, and it was during the RFL that I started planning this hybrid. Most of the experience came from CS and Baal runs, but sometimes I'll walk through other areas of the game for more monster variety. The last time I played a hammerdin, BH still pierced Wave 2 magic immunity, so it's been a while.


ffs said:
Nice idea, very similar to the eth Death Cleaver hybrid Zealot I'm making next in my sept. Though I'm going to focus on physical damage much more, especially considering for questing he won't be able to use the 2/20 amulet that's going to be part of his end game gear.

Interesting to see you hybridising with BH though, I ruled that out due to the amount of skill points required. But the Pride Merc route seems to be a viable option. I was planning on using Infinity since it helps both FoH and solves AR problems due to not using Grief. Did you have AR issues or was it OK?
Click to expand...

I didn't notice any big issues with chance to hit during play, but then again it's not easy to notice a miss with a Zeal that attacks about 5 times per second. Being at a high level helps when half of the chance to hit equation factors in attacker vs defender level.
Let's say my level 93 with 6.5k AR faces a level 85 monster with 2k DR, I'll have about an 80% CTH. Raising my AR to 8.7k brings CTH to 85%, or 12.5k to 90% CTH, so there's diminishing returns in effect. If the monster is under the effect of level 12 conviction, its defense drops by 83%, and my CTH easily hits the 95% cap. Infinity is a great way to get max CTH, and pairs well with a Zeal/FoH build.


Thanks everyone for the comments so far!

I could upload some game play videos too. P1, P8, or both?

Congrats, that's one hell of a sexy weapon!

Here's the video of two CS+Baal runs, P1 then P8. Having Concentration always on interrupts teleport from time to time, but for casual play, it's fine.

Never really thought about combining those skills together, looked like too many different needs to combine successfully, but now.....

Like this a bunch. Did you put the Spirit in a res shield or a ed/AR shield?

I imagine a @45 resists, the ED/AR is underwhelming, but I am just going off of what I'd do...

Thanks! It was a +40 Res if I recall correctly. I was never diligent enough with picking up more shields to search for that +45.

When doing hybrid builds (caster/physical) I always look for the items I can squeeze both skillsets onto. A spirit with ed/AR would be exactly a piece I'd look at for this build myself, that's why I asked. I also wondered if Alma Negra would have been a cool choice, but then it lacks the fcr of spirit.

I have a 63ED/101AR Sacred Rondache, but I'd have to sacrifice much more elsewhere to replace that Res. Spirit OP indeed.

Fun looking build. I'm glad such a gg weapon got some use, and didn't just get stuffed in a stash.