Make sure you realize the mod status of any items you take and act accordingly.


jjscud's "good sportsmanship" suggestions. I won't enforce these but any reasonable person shouldn't have any problem following these.

1. Don't claim items for their trade value, claim items you want to use or as a trophy
2. If you want a trophy, please be considerate (i.e. no grailers)
3. if you claim an item and the player really wants it, give them a chance to trade back their self found item for a similar or better one or other item as you see fit.
4. If someone is claiming one of your items, you may personalize it before giving it to them.
Last edited: Jul 18, 2011
V

Congratulations for the winners! :thumbup: The unfortunate weekend says its word and I'm at 5th place. I play 1.12a between.

What is the procedure for looting the items? Should we send our MFO stashes and the first 3 choose what they want or they can only pick from the top5 qualifiers? :scratchchin:


Victus said:
What is the procedure for looting the items? Should we send our MFO stashes and the first 3 choose what they want or they can only pick from the top5 qualifiers? :scratchchin:
Click to expand...

Technically just the top 5. The winners will request readouts or the items directly so everyone needs to keep an eye on this thread for a few days. Its not unheard of for the winner to request some other item but there's no obligation there.

All hail jjscud, grand master of MFO hosting. Seriously man, this is my favourite d2 moment of the year, all the hard work you do without any supervisors, I love you.

I won't be looting and see you all next time! 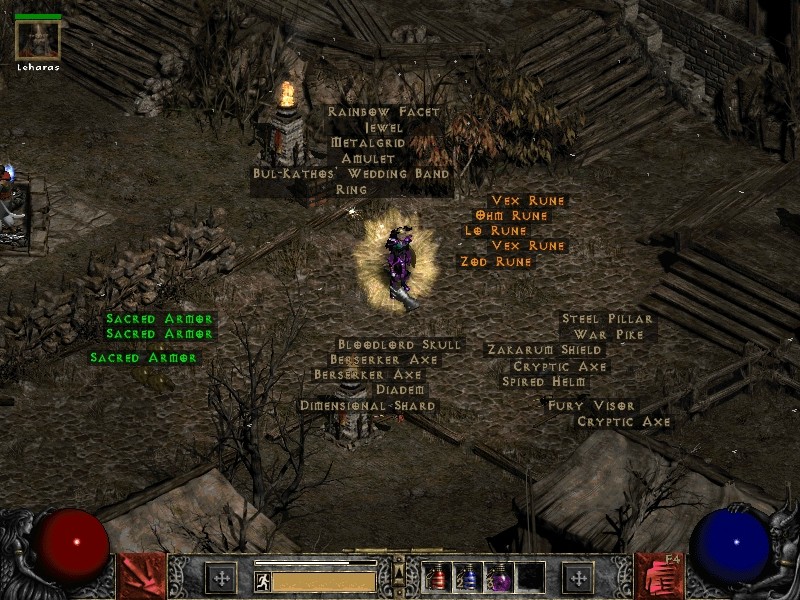 (Steel pillar was from WSK, but it felt sad so I included it in the haul pic )

Congrats to the winners and most importantly, to Team Kittens!!! on the team category victory! Go us!!!

Will post a haul pick and readouts later on tonight, have to get some stuff done around the house first!

big congrats to the winners.

heyaaa last place as expected in the first 2 hours of my runs i got the 42 points. i improved it by only 9 points for 9 long days.

Congrats to all the other winners and thanks a lot to jjscud for hosting! Flavie of all my 196 qualifiers.

I won't be claiming any trophies.

Wow, nice hauls by a lot of you guys. As far as my stuff, here's a look at my drops.

I ran my first 600 runs with a Javazon at about 640 mf, then switched to a WW barb that had about 530 mf for the next 3600. I ran more than I thought I would with work and school, but obviously it wasn't nearly enough to win. I really hoped I might find a qualifier worth at least 14 points somewhere along the way though... I did fill 2 holes in my grail: Executioner's Justice and Griswold's Caddy.

And now, the only item that I found that is worth looting:


Code:
Thanks to jjscud for running a nice and smooth MFO!

Congratz to all the winners and thank you jjscud for hosting. Hopefully everyone's at least enjoying some of their loot.

Won't bother with haul pic. What you seen in my top5 are pretty much the cream of the crop. I really would have liked to have Nepeta's rune luck!

As far as looting goes, I'm only interested in something with Mio on it. Can you do that, frozzen?
Z

Congratulations to all winners and thanks to all who answered my questions especially jjscud.
I only wish I hadn't spend so much time on 85areas and run Pindle a little bit more. Anyway, I'm happy with my result. It's only been a little more than a month since I restarted. However, I'll be more prepared for next MFO.

Now, looting
I'd like to see rolls on Webs, Dancers, Steelrends and Gris Caddys.
I wont take Webs, but I might take something else if I like the roll.

Congratulations to all the winners, particularly Paradigmshift! I had a strong feeling I was just one drop short, and while the last two hours of running saw two more TC87 uniques, neither surpassed the 10.7 threshold.

Some notes/statistics from the Tunnels:

I had great depth of scoring (my #6-10 items were all 9.3 or 10.7), I was just missing one more 11+ point drop to push me over the top. Of the ambiguous items... the scourge, both sacred armors, and thunder maul were the "wrong" ones (my third earthshifter vs zero cranium bashers). Phase Blade was the right one, but azurewrath scoring was sadly downgraded this time around.

I won't be claiming any prizes/trophies, enjoy the loot!

EDIT: I almost forgot, THANKS to jjscud for organizing!!

Second is pretty good place for a first timer. Thanks jjscud for hosting the shindig. As for looting, I think I just bask in the glory of a silver medal.

@MercMan, below are my top 5 & a couple to other notables. Let me know if you want a personalized item


zgpmf said:
Now, looting
I'd like to see rolls on Webs, Dancers, Steelrends and Gris Caddys.
I wont take Webs, but I might take something else if I like the roll.
Click to expand...

I guess second place as a newbie isnt too shabby (albeit a distant second). Respect and congratulations to nepeta for that insane score, which I am sure is a new record for Baal.
I lost motivation in midweek but still kept trying, sadly my score did not improve since midweek. I'll share more thoughts in the meet the olympians thread.
No lootpic from me; it is too embarrassing. My best rune finds were an Um and a Mal (wut).
As for looting, I will like to see the rolls on the Darkforce spawn, death cleavers, and the CoA.

4th place is what i expected after my DFSpawn drop on saturday, which pretty much the only good drop for me unique wise. Funnily enough it was eth and from the skeletons from wave 2, unfortunately Death Mages don't seem to be Atma Calculator database so i can't check the probability. It was also my 10th DFSpawn making it my most dropped tc87...
The good side of the MFO for me was the rune drops - 2x Sur, Lo and a Gul. And also quite a bit of exp, to be precise i went from 2.255mill to 2.281mill. I had 2 deaths though with losing about 20mil of Exp.

@ Zarqu: I'll think of something.


Code:
Well I said it before, it started really nice but then something went horribly wrong. Managed to get my zon to 98 and trapper to 96. Add in two deaths and one corrupted character (this hurt most cause I managed to get my corpses after deaths) and my run number went a bit over 1000.
Moral of story? Baal stinks like rotten underwear. That or I just didn't have any luck
From first two days I had Sur, Gul, Gul and since then nothing.

Tnx to jjscud for another nice MFO and see you all in winter (I hope).

Nice results! Congrats to the winners, there are some really impressive numbers :thumbup:. And I think our Pindle category was quite challenging this time, dry spell can hurt, but it's nice to see this category is still popular (although I guess I was running Pindle probably for the last time, I could feel my brain was melting).

Thanks jjscud for organising it again :thumbup: and I'm looking forward to the next one!

Found one grailer (out of 4), Shadow Dancer, with nicely bad roll, so there is a chance no one likes it . Griswold's caddy with 3 os is not much interesting. DW is pretty good, I was waiting for such for a long time, but well, it's just game. Here they are:

Grats to the winners, and especially MercMan on the Tyrael's.

My first MFO left me in surprisingly good shape.. I did manage to get in 24 hours of running by spending all my free time doing runs.. Based on run times (about 53 sec) I did ~1600 runs. A 6-7 second delay while loading A1 was quite frustrating at first, but I decided to think of it as a rest to stretch my wrist, drink some water, etc..

My goal for the MFO was to improve my grail status (which I did, only due to the ravenlore despite being G-20 or so) and find a few good items. To whit:

Code:
And last, a big thank you to jjscud for taking the time to organize this MFO!

Congratulations to all the winners, and thanks to jjscud for organizing the MFO again.