Split the sky asunder noble huntress of the clan. In your left hand raise the [strike]sword[/strike] bow, in your right hand cast the spear...


Hear ye hear ye, the story of Vahana and her ascent to matriarchy. After a long stretch of playing only on ladder, I have again embraced the merit of singleplayer and the wonderful convenience of GoMule.

Vahana is a proud Amazon warrior, born under the sign of the Fishy. She wields the power of frost in her left hand, and the power of lightning in her right hand and have decided to face the perils of hell without the help from the valkyries that often protect her people.

She set out as many others, cutting her path forward with a dull, rusted javelin and steel sharp determination. A bit into her journey she made friends with an ex palaceguard named Gulzar, and together they faced all perils the three prime evils could throw at them.

A bit into her journey she found her first set and unique item. Both due to bugs in the game. :S 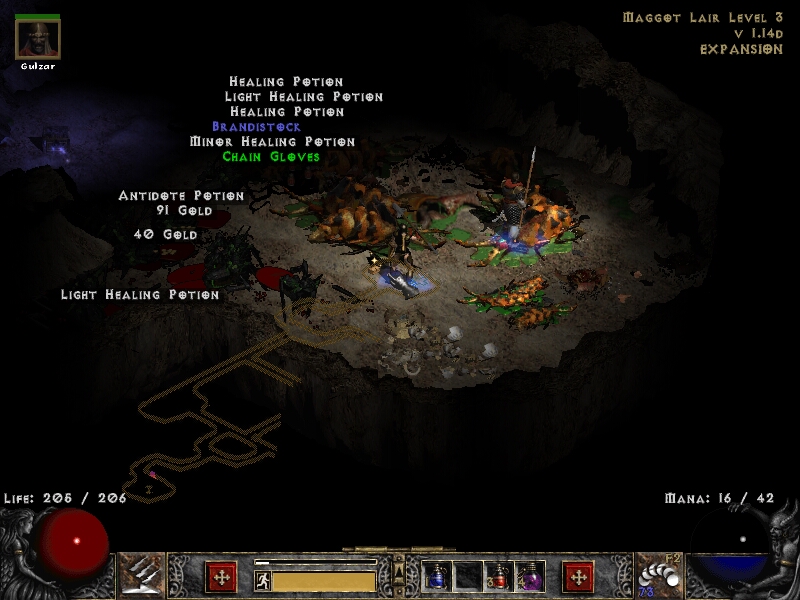 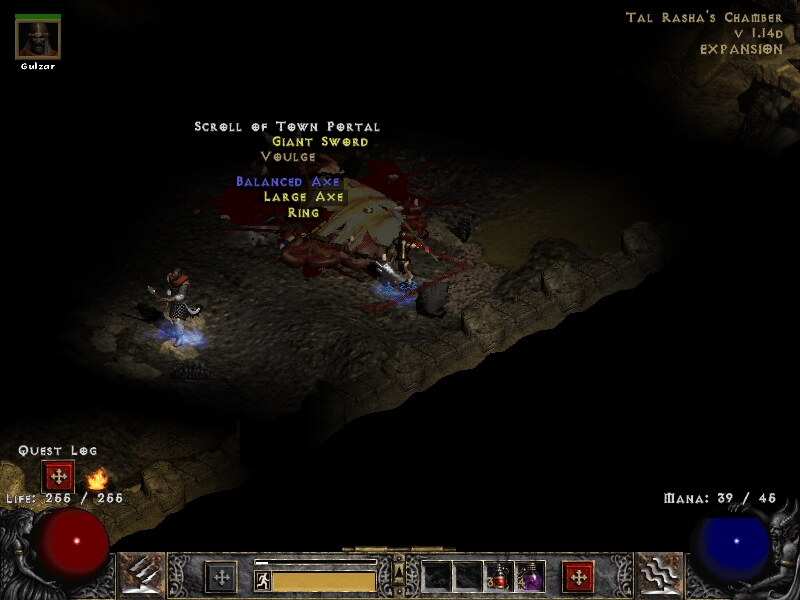 A great pair of gloves for a bow Amazon. Good thing I really like amazons. And a decent upgrade for Gulzar, at least until we find him a pike with a decent mod.
Later, after rerunning Andariel a bit (when I had "maybe 5 min" playsessions) she found one of the best low level set items. 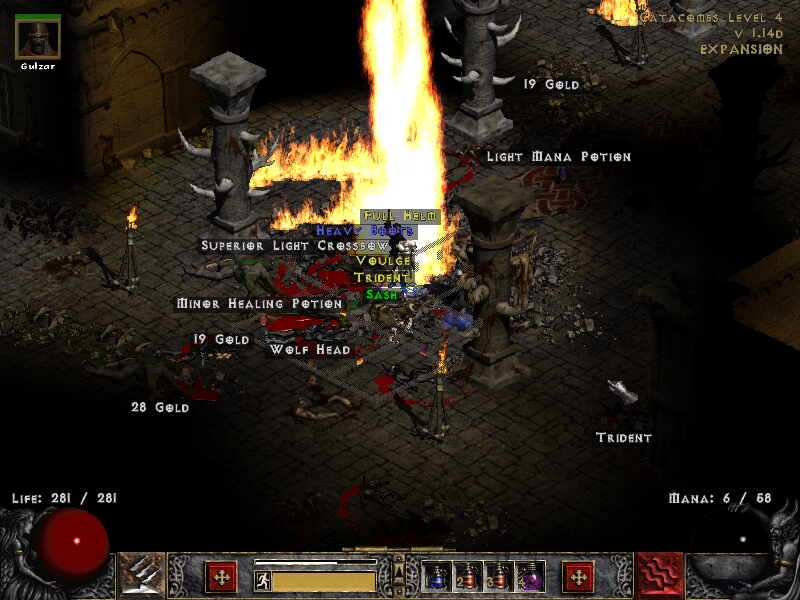 For me, Death's sash and Glegaw's gloves are both really top tier low level items. Cannot be frozen is so nice to have.
While the powers of frost and lightning made short work of any enemies set before them, Gulzar was starting to worry about his friends drinking habits. Many were the blue beverages bulging from her breeches as they left the borough, big was the banquet of blue brew that was imbibed before breakfast.
He knew that since knowledge is half the battle, insight would be needed to solve this problem. In the arreat plateu he found the first piece, and the strange land of beastial bovines provided the second. 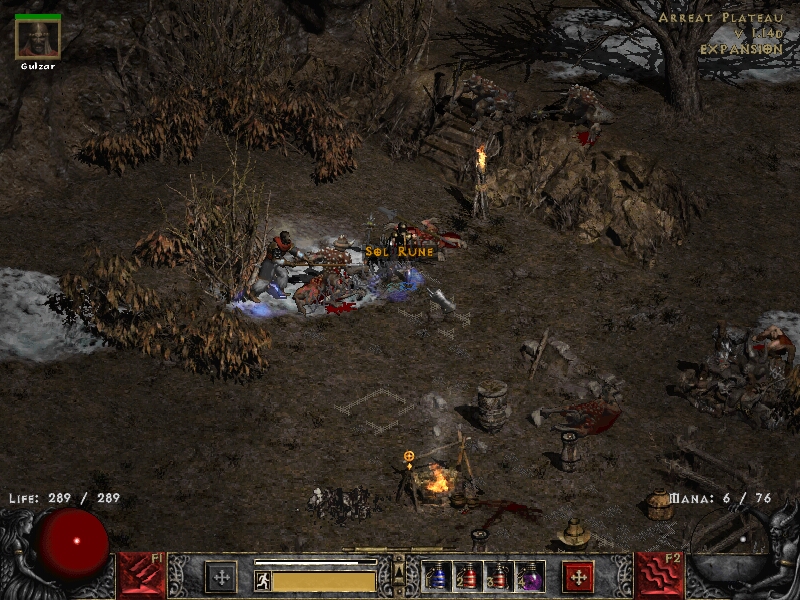 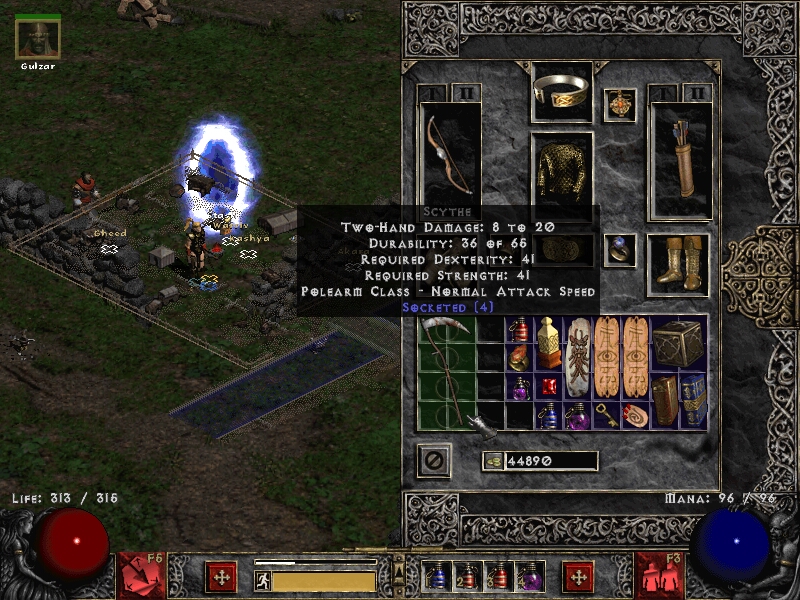 I had had some problems with RWM (my game reverted to classic when I used it!?), but could not be bothered to fix it until I had reason to. Well now I had reason. First try after I managed to get the game to load as LoD again: 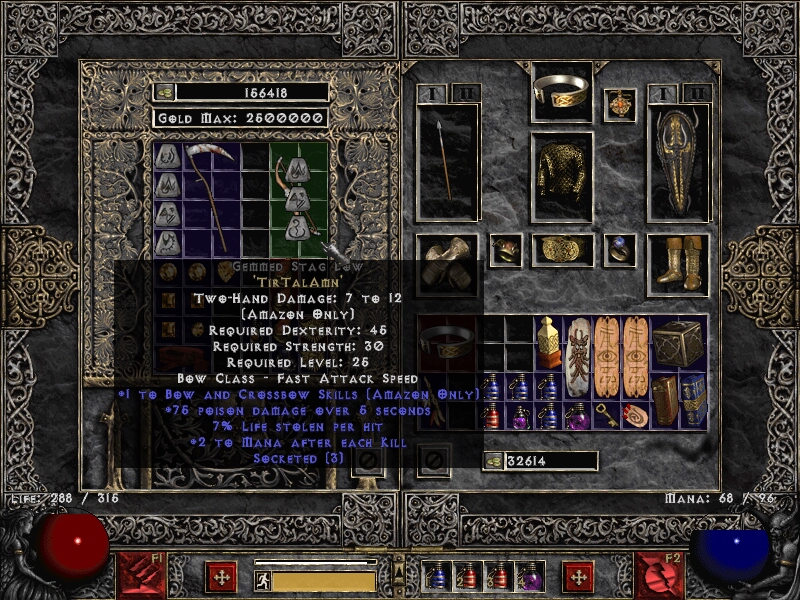 Fiddeling around a bit more: 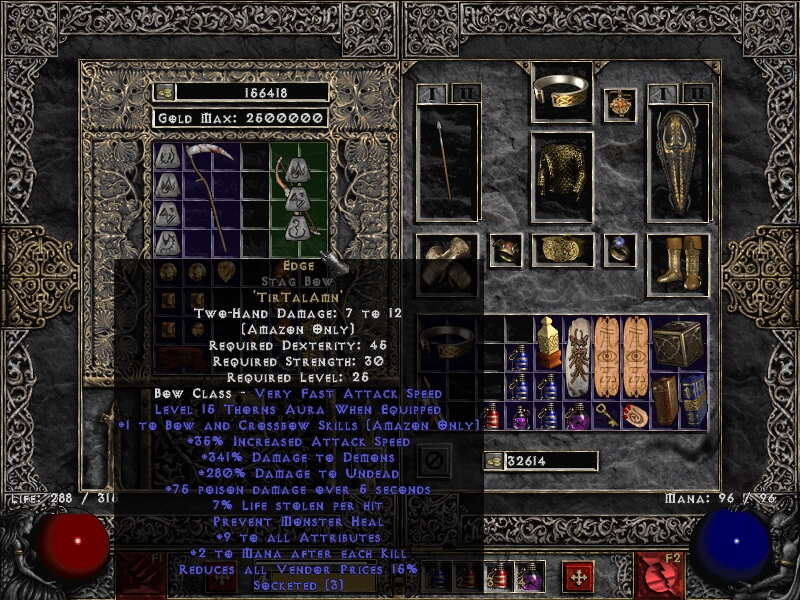 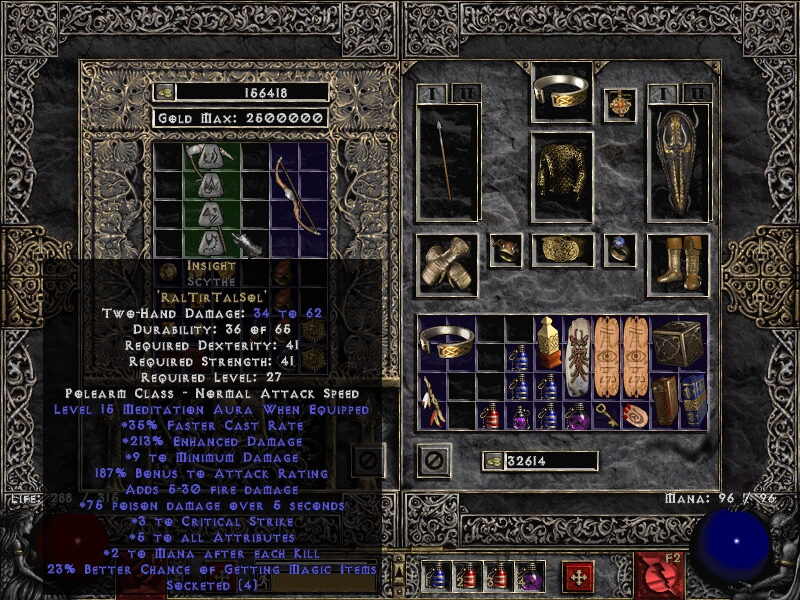 With the new insights gained, the nightmare of following the three Prime Evils were significanly lessened. They found the place Milabrega probably died... 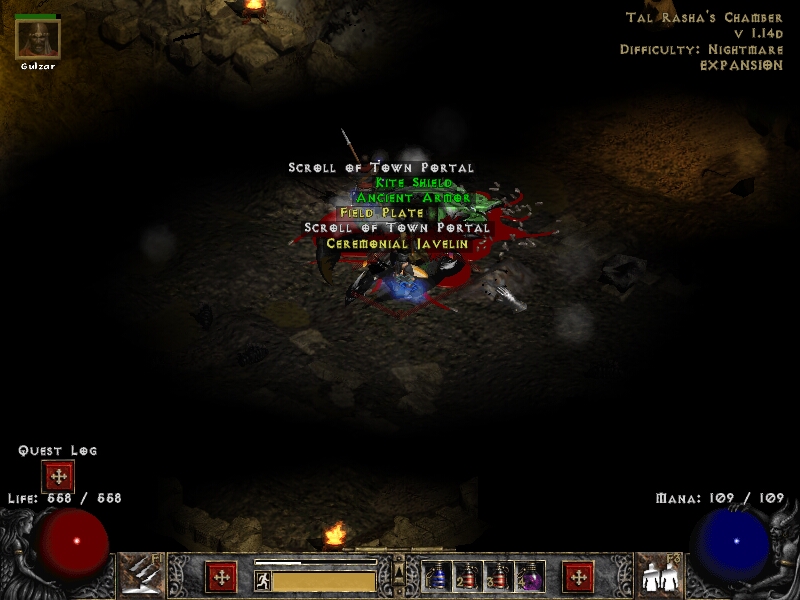 RIP Milabrega
Gulzar got his chance to shine... 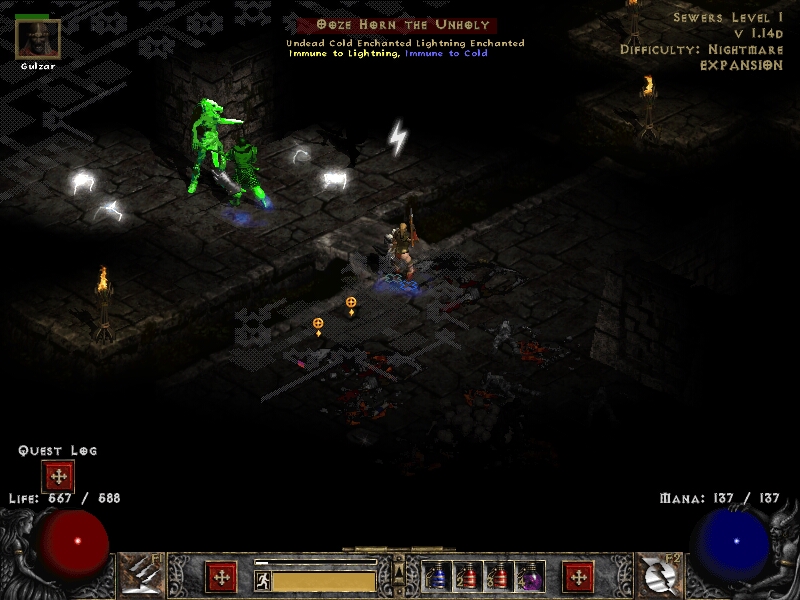 First CILI dualimmune.
and they found some gloves for one of Vahana's sisters. 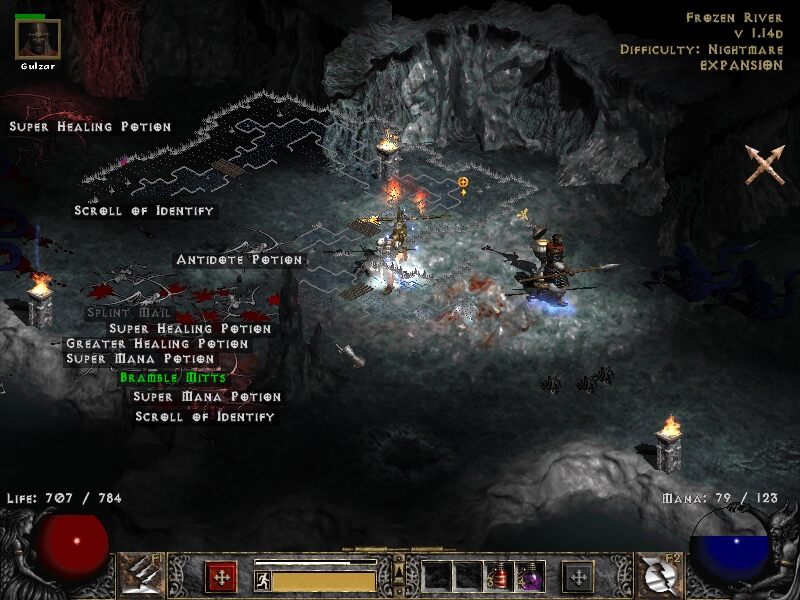 They carried on into hell itself, staying a while in the pit to grow strong. When pushing forward, they found indications that Gheed might have tried to charm the queen of hell herself for favours. Could this be the source of his fortune? Then again, we did gamble quite a few circlets from him. 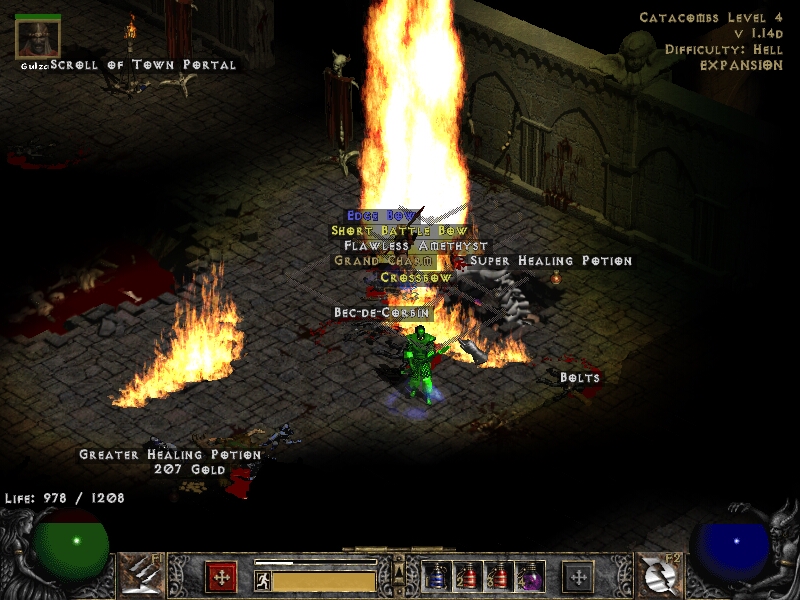 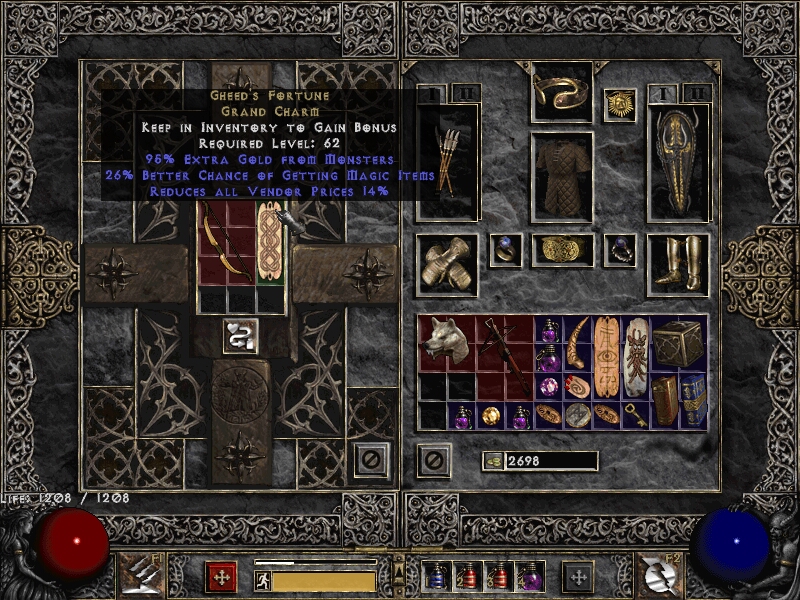 Among other things, Stormshield was found while running the pit. 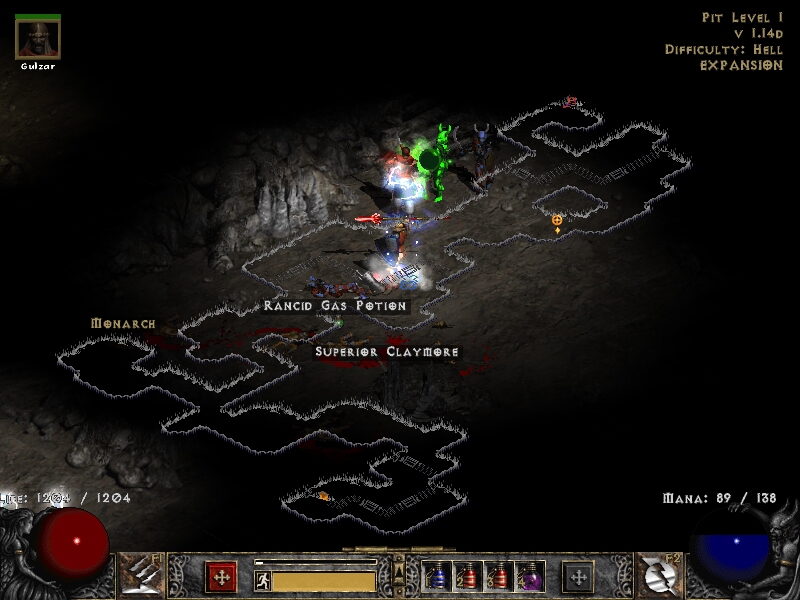 The first unsurmountable challenge for Vahana came at the ancients. She had tasted the bitterness of death a few times over the journey. As had Gulzar. But they always managed to grit their teeth and push on. But the ancients were something else. With two out of her three attacks (FA and LF) designed for crowds, and her third attack leaving her in melee (CS), she found herself having great trouble passing the test of the Nephalem.

After a few fruitless attempts, she sought the advice of the oracles. After their advice, she trained herself to better use a shield and used the legendary Stormshield she had found earlier. With this increased durability to physical violence, the advice and tools from the oracles and a blessing from one of the most legendary Amazon warriors, she faced the ancients once again. And this time... 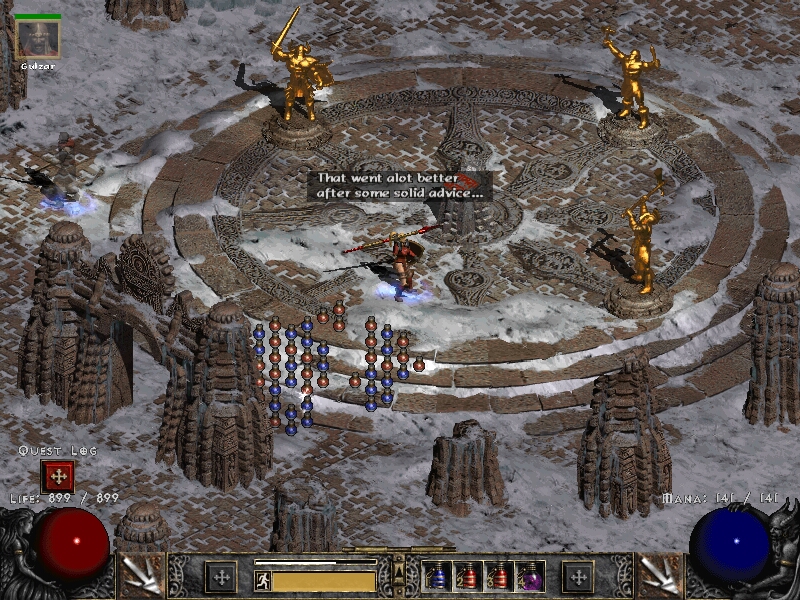 Having proven her worth against the ancients, she sought out Baal and ended his reign of destruction once and for all. 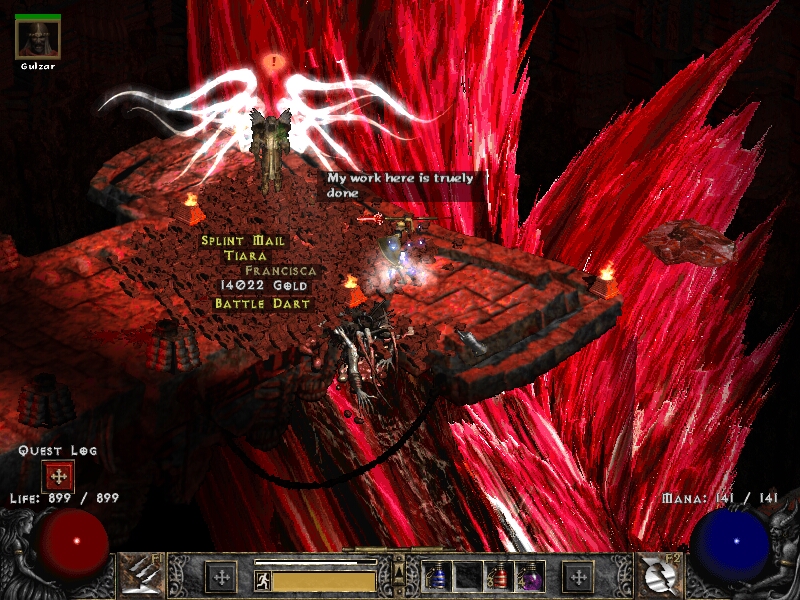 And thus, Vahana was crowned as my first Matriarch.


I then used her to run baal a bit. With the reduction in vitality brought out by the points allocated in STR and DEX, she was a little bit weaker to elemental attacks. So Gloams were a problem, but I could usually make my way through them anyway.

Except that one time when they stair-trapped me. I tried to at least get my body, to mitigate the exp loss, but died so fast every time. At the time of my S&E, I had gathered the body with my items aswell. But since I had STR-bugged the Stormshield on...

...it was still on the corpse, and was lost at the S&E. I am still a bit grumpy about it.

Congrats on the mat even more so if untwinkied. Future plans for her?

mir said:
Congrats on the mat even more so if untwinkied. Future plans for her?
Click to expand...

Thanks alot. Feels nice to have a SP untwinked, so I know I have completed the game on my own.

She will sit for at least a week, until I am over loosing the shield with her. After that, probably throw on a sigons, farm a respec, and rearrange the stats for whatever shield I decide on (Whistan's Guard is probably the best for her).

After that I plan to use her to get me some gear for twinked characters. Probably by running WSK/pit. Maybe join some RFL/MFO type tournament in the future, if I ever have that sort of gametime.

Congrat to mat and nice write-up

Nice write-up! That’s too bad on the SS

Edit: and of course, congrats on your first (sp) matriarch!

Thanks for all the kind words.
I did initiate some mfing with her. Started by killing NF Baal once, thinking it would be fast after all the extra levels... but it was super slow.
Reverted to pindle/shenk/eldritch, but somehow the damage of my LF seemed so weak, and I even managed to get charged to death on the first pindle...
I think I need to let her rest for a bit before I MF with her...

With the very limited time I have over now between work and renovations, I am playing some with a goldfind necro and planning an untwinked sept. Not that I'll have time for one soon, but planning is also fun.

You need Razortail. The damage of both LF and Freezing Arrow benefits drastically from being able to pierce.

When running Pindle with a Zon, it's important to cast your valk into the middle of his pack before actually entering his crypt. That gives them time to be distracted by and focus on her. I like to hit them with a couple Frozen Arrows at that point to hold them in place, then switch to LF to take them out. You can also play it even safer by casting Decoy behind them, at the entrance to the stairs.

NM meph is a good pit stop for MFing, he can drop many cool things for a fishyzon like already mentioned razortail

Kartongen said:
Having proven her worth against the ancients, she sought out Baal and ended his reign of destruction once and for all.

And thus, Vahana was crowned as my first Matriarch.
Click to expand...

Great first Mat post! And I love how Baal "crowns" her with the rare Tiara drop

Congrats on the mat. Great Mat post btw, I very much enjoyed reading it.

@Pijus @Noodle Yeah, I definately need razortail. I just decided to mat her before I started the heavy MF-ing. And I did run pindle/shenk/eldritch for about 2 levels when I hit a stop at the ancients (and some before that too), and did not really have a big problem. LF spam usually killed them before they reached me, and if not I would freeze them/back up. I think I was just unfocused and thus died.

@drmalawi Yeah, maybe NM meph is where I should go. I was thinking NM with my gear, hence the NM baal run, but that just took too long. The PES dance (pindle/eldritch/shenk) felt like it game more. (At least a bunch of rares --> money --> gambling with some occational S/U.) But I will give NM meph a go.

@Jocular He, did not think of it that way. I should have kept it, despite the crappy afixes, and wore it at formal functions.

@T72on1 Thanks. Yeah, there are more planned, as mentioned. But planning and the occasional 15 min session is what I have for now.

I tend to stash any junk rare circlets/wands/staves/orbs/anything-with-mlvl I get from Baal... occasionally, I burn through the massive pile of pskulls I've been hoarding, and sometimes I even get something pretty decent for all this trouble

Interesting.
I assume you use the 6 Pskull reroll? I never game that much thought since it lowers ilvl. How many rerolls do you do before you trash it for good?
M

Never before was the need for mana potions better described, bedazzlingly beautiful by Gulzar the benevolent benefactor...

Congratulations, and what a lucky amazon with items. Sad to hear you lost the shield, that was a fitting item for a lightning character. lol about Gheed too. If humans use circlets as headgear, what do Andariel have them for? Bracelets maybe. Or a key ring? Perhaps Andariel would have locked the monastery down completely had it not been for Gheed the brave double agent that stole the demons key ring.
You must log in or register to reply here.
Share:
Facebook Twitter Reddit Pinterest Tumblr WhatsApp Email Link
Top