Hi all. Instead of working on my 99er like I "should" be, I followed up my untwinked sept with a twinked-to-the-max rush of a sorc through to matriarch, in order to be a permanent LK resident. At that point, she will just use super cheap 200fcr gear, so I can just leave her equipped and do runs whenever. Kuromi is for lower KURast, and eventually I think I'll rush sorcs named something like Tramoira and Untessa for trav and countess respectively . 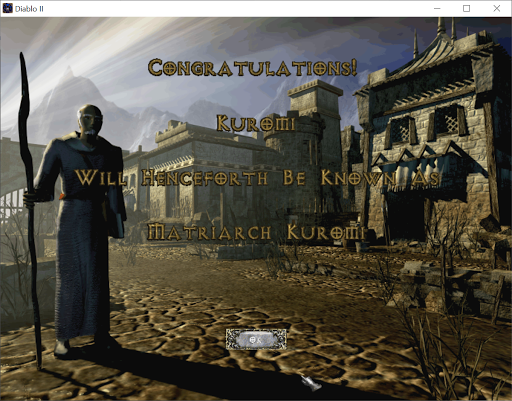 Anyways I wanted to plan out a twinking process to make this playthrough as quick and easy as possible. Not truly efficient, I'll leave that to @NanoMist and could never hope to do nearly as well. Just wanted a playthough that was brainless and took no more than the weekend. Also didn't want it to use any gear that I couldn't leave sitting in a twinking stash, so there will be no cta or hoto or infinity. So I came up with the following twinking plan.


Level 1
mule on 1 million gold
helm - 3x envy mask
ammy - angelic (lvl 12)
weap - 5x envy long bow
body - 3x envy breast plate
shield - none
gloves - arctic -> sigons (replace with death when have sash)
belt - arctic -> sigons (replace with death when have sash)
ring1 - angelic (lvl 12)
ring2 - angelic (lvl 12)
boots - hsarus
charms - 5 4str gcs, 6 AR scs
merc - 5x flawed topax long bow, 3x jewel of ire mask and breastplate (someday maybe envys)
equip arctic at lvl 2, hsarus at lvl 3, sigons when 60str, and angelic at 12, get lvl 5+ ice merc asap
Level 15
(no +str on gear i think, should get to 45 str and keep to end of game)
helm - 3x flawless sapphire
ammy - civerbs
weap - 3fb staff -> 3fb leaf
body - stealth
shield - n/a
gloves - hand of broc
belt - lenymo
ring1 - manald
ring2 - mana
boots - hsarus (30str req)
charms - 4 mana gcs, 8 mana scs
merc - 6x flawless topaz halberd, eth twitchthroe
equip leaf at lvl 19, put rogue merc gear up before hiring a2 merc
Level 29
helm - lore
ammy - 1 to sorc skills rare with life and mana -> (equip before hell) 1 sorc skills [email protected]
weap - spirit (43str)
body - vmagi
shield - 3x pdia round shield
gloves - magefist (45 str)
belt - 10fhr/res/life
ring1 - fcr/fire res
ring2 - fcr/cold res
boots - 20frw/res
charms - 2 mana gcs, 14 sustenance scs
other - lower res wand
merc - eth partizan insight, eth twitchtroe (flawless amethyst socketed) , wormskull -> (equip before hell) treachery, tals mask
At lvl 70 (when I will enter hell) switch ammy to 1 sorc skills [email protected], and put tals mask and treachery on merc
I'm short 1 jewel of envy on the lvl 1 setup, so there were only 2 in the breastplate. And maybe someday I'll end up with so many that I can deck the rogue merc out in them as well, but her flawed topaz and min dmg jewel setup worked nicely too. I shopped for my leaf base for 40 minutes at Akara before I realized Drognan is 2.5x better for it. And finally, when I got to lvl 15, I found I only had two 3os masks, and both were already used for the lvl 1 setup lol. So I put the flawless sapphires in a 2os helm. Still had ~350 mana at lvl 15. I also somehow forgot to mule on LR wand and didn't even miss it. Would have sped up ancients fight though ofc as well as some other instances, so I'll be sure to remember it next time.

Almost forgot to discuss the skills progression. I did it like this:
I liked this a lot. I've played through the game as meteorb 3+ times, and I just like blizzard so much more than orb. And it wrecks p1 hell just fine even if under-synergized. Definitely my new favorite playthrough build. And I like this as well because it allows me to use zero respecs. So she can have them leftover to do whatever she wants with after the game is over.

The playthrough plans were as follows:
I did all quests that improve the characters (so den of evil, radament, izual, jade figurine, lam essens tome, anya, imbue, socket), saved cain in nightmare and hell, and did hellforge on all difficulties. This worked out very well and the playthrough went smoothly. For lvls 15-29 stage (pre insight) I find that mana pool matters much much more than fcr for comfort, so I maxed this out (as well as using civerbs + manald for some surprisingly significant mana regen) and think it worked great. I timed my questing in hell (after getting lvl 70 in nightmare) and it took 1.5 hours. Next time I rush a sorc, I will time the whole process, but since I was still getting the stashes and the plans together for this one, I didn't do so.

Hell hellforge was more packed with maggots and grotesques than I've ever seen, so I wasted some time there, but it was well worth it because the forge was ist . At ancients I had to reroll them a fair few times. I was looking for the following.
After I got this, the fight was smooth even though I forgot my LR wand.

After she was done getting though hell, I respec'd to blizzard and the str to use spirit monarch, and I started trying to find an LK map for her, and then I was like oh wait, I should really use her normal and nightmare imbues and socket quests first. I imbued a diadem and tiara. Both got 2 skills (sorc and pally) but neither got fcr. I socketed an oculus and a 2/20 zon circlet (no other decent stats) that I will use on my zon until griffons shows up.

I then rolled this map for her in about 5 minutes: 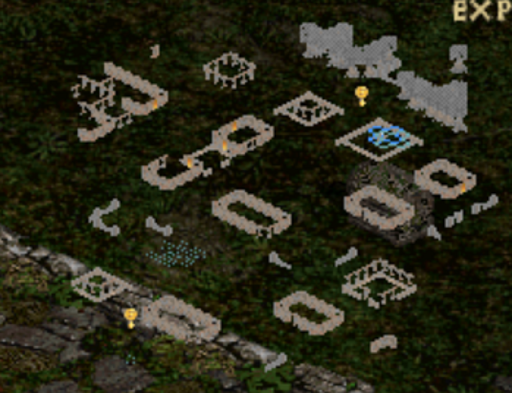 It's less good than it seems, since I'm having trouble with too many monsters spawning in the huts and dying, so it may get rerolled eventually, but I'll keep it for now. I did about 50 runs and already found these two treats 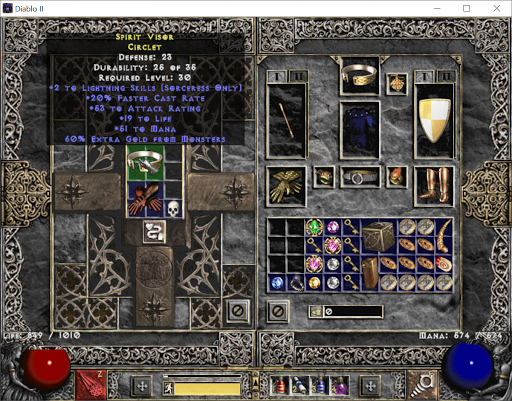 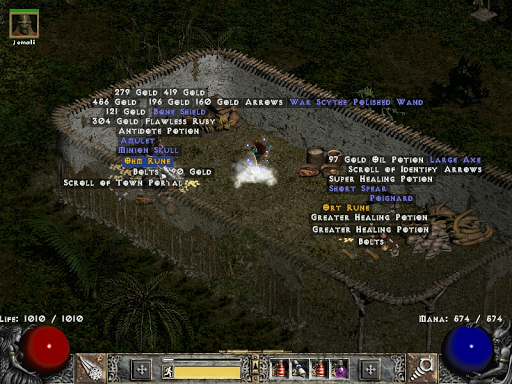 ohm and fake ohm in same hut
I wondered how much of my dying would be mitigated by being a higher lvl due to less chance to be hit (she was only 75ish). So I decided I will lvl on p8 pindle. And was like if I'm gonna do more than a couple of hundred runs, I'd better equip some MF gear. Used the ist she found on the occy she socketed, Socketed my skulders, and am running pindle with 625MF on her now. This is the first time I've ever broken 600 0_0. Anyways shes low 80's now and I think I'll get to 90 with her, then try out this LK map a few hundred runs more and decide whether to reroll or not.

Anyways that's it. This was fun and I'm very satisfied with how it went, and she's already off to a good start in LK. I'll certainly update with playthrough times if/when I get around to rushing more sorcs.
Last edited: Sep 23, 2019

If you go at it again I can only recommend the Halls of Anguish + Halls of Pain for quick NM leveling with the chance at runes and bases en masse. Everytime you kill Pindle just go down to the HoA and see wether there are Flayers or Beetles, if yes you do a full clear of the first hall and go down to the HoP where you have a 50% chance of getting Flayer Blowdarts, if those are there you can do another full clear.

It's ridiculous how much XP one can get from p8 HoA + HoP if it rolls Beetles+Flayers followed by Flayer Blowdarts. And since you kill hundreds of monsters in such a short time frame you have an insane amount of drops with runes up to Vex and a lot of bases that are capped at 4os.

Ah nice I sounds great! As far as hating pindle goes, I can't make myself run him for general MF purposes, like MFO or something, just because I feel like I'm closing the door on tyraels. So I actually haven't run him that much. Pretty much only for sub lvl 70 in nm and sub lvl 90 in hell for exp. That being said I'm always up for more variety, runes, and bases. I'll give it a go next time!

Nice going, twinked characters are fun in their own way, especially assembling the gear.

Thanks nano! Yeah I had a great time planning it out and refining it a bit. Plus it felt like lightning speed after all those untwinked characters I played with

Nice. I agree with Nanomist. It's definitely fun to rush through the game at high speed at times.

I got Kuromi up to lvl 87 from pindle runs. Still planning to shoot for 90 but at this point I tried ~100 Lk runs or so and had no deaths or super close calls. So I'm now a big believer in levels alone helping a character out a ton. I had questioned this in the past. But getting 10 lvls on Kuromi turned my LK map from "probably reroll due to monster spawns" into a keeper, despite my refusal to use cta (so <1100 health).
You must log in or register to reply here.
Share:
Facebook Twitter Reddit Pinterest Tumblr WhatsApp Email Link
Top