So I decided to fire up a fresh instance of Vanilla D1 (1.09b on Windows 7 x64 (Using new ddraw.dll for color fix/window mode) on a Rogue. I've played a warrior before and beaten the game with a Sorceror like 1-2 years ago. I've never tried the Rogue but so far she has been very fun. Shooting everything from far away with physical damage without having to worry about mana is pretty relieving. I'm sure it will haunt me later with the physical immunes, so I've put a little bit of points into Magic in order to learn some basic spells (Charged Bolt, Headling, Telekinesis).

I had forgotten at what level it is recommend to do butcher but it definitely wasn't at lvl 4 haha, I ended up having to run away down level 3, so currently that's where he is waiting. I also found King Leoric's Tomb in level 3 but I'm going to wait till I'm stronger a get a better bow before tackling Butcher/Leoric.

I also tried to buy a magic bow (premium bow) from Griswold since he randomly generates items whenever I come back to town with a scroll of town portal, he only spawned one in the beginning and it was too expensive. I tried to force a reroll of the shop items by walking to Level 1 and coming back, but he didn't re-roll it. I'm guessing the developers thought someone might do that and maybe they made level 1 not re-roll? It definitely re-rolls when I go and play for a while.

At the moment it was really fun, but not _that_ challenging, there was one instance that was a bit scary since a Hidden elite had revealed itself behind me when I walked into a small room. There were a few other monsters and Hiddens in the area so I had to quickly get out of there.

I also found a nice ring, bow, and purchased a nice helmet from Griswold. At the moment I'm trying to save every penny since the gold is valuable.

If anyone wants to multi, I have a Discord channel and VPN that you guys can freely join. Please message me for info.

Below are some pictures: 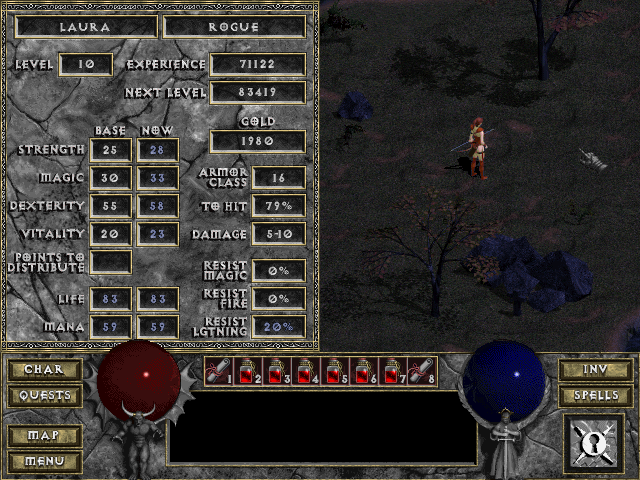 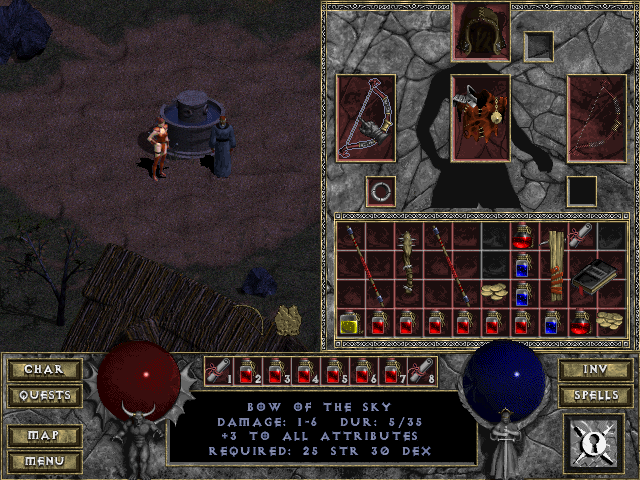 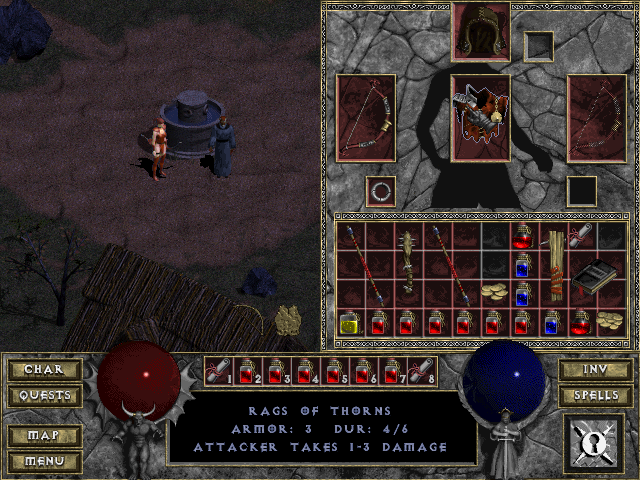 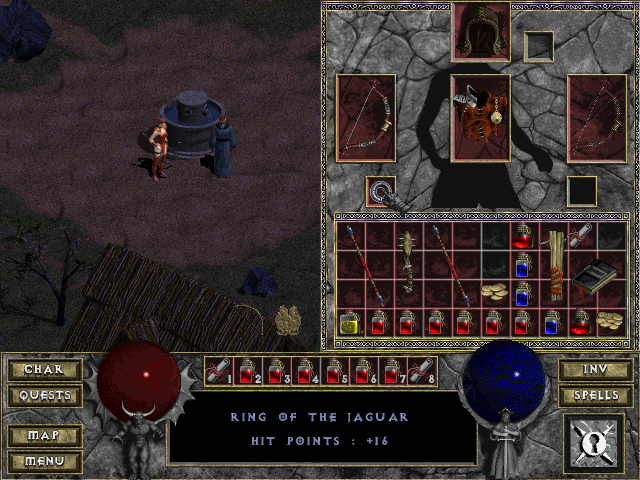 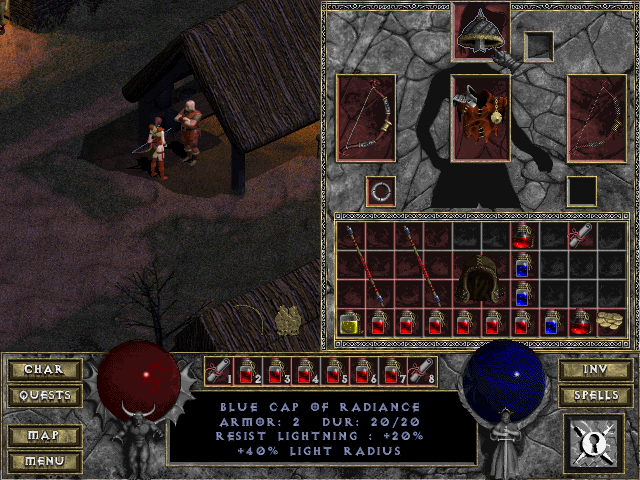 Pretty nice staff that I'll keep in inventory and will recharge if it isn't too expensive. I basically get 8 town portal scrolls for only 6 inventory slots! 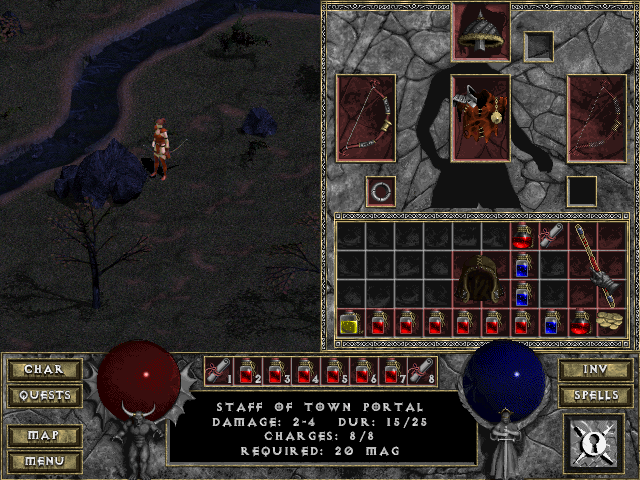 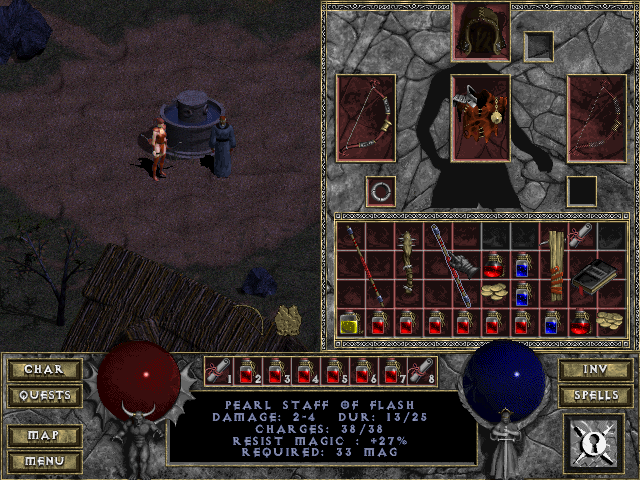 So more progress with Laura. She is currently level 14 and has cleared level's 5 and 6. She is in the beginning of Level 7. I've also cleared the Bone Chamber, Butcher, and King Leoric. Killing Butcher at Lvl 14 simply required like 6-7 shots with my Bow. He didn't even reach.

I was also able to retrieve Arkaine's Valor which COMPLETELY changed the game in that I take less damage, have more life, and all of that. Monsters can hardly hit me that much anymore. I also have high dexterity so I have about 91% chance to hit. I just really need to find a windforce now so the game is wrecked haha. 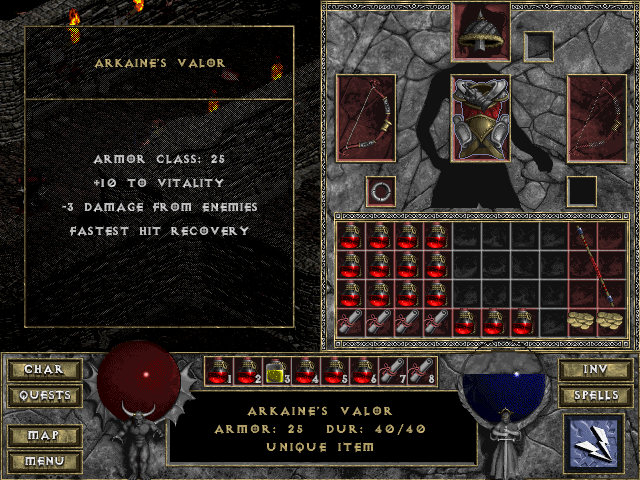 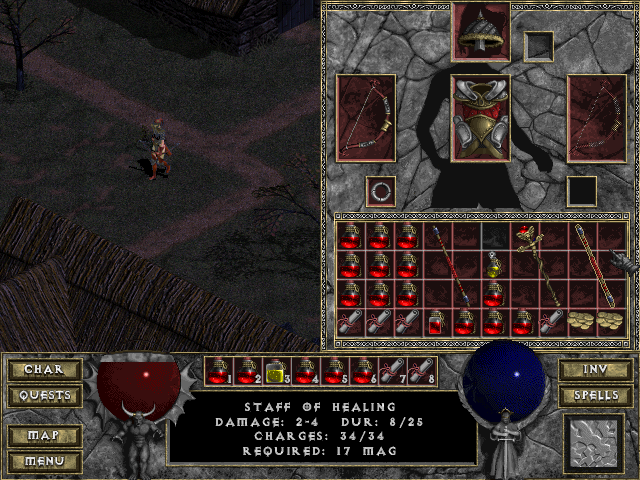 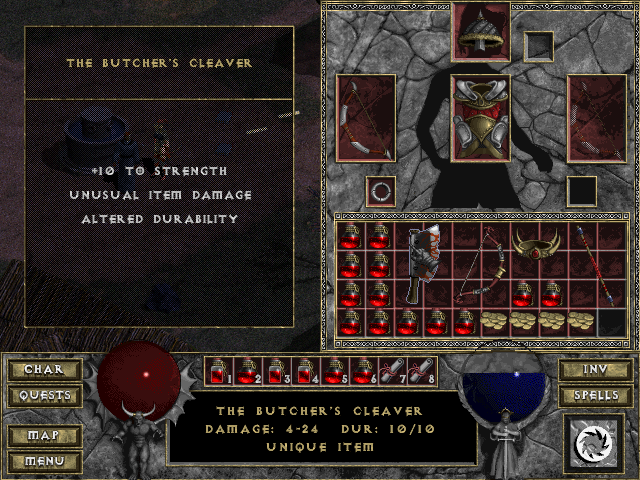 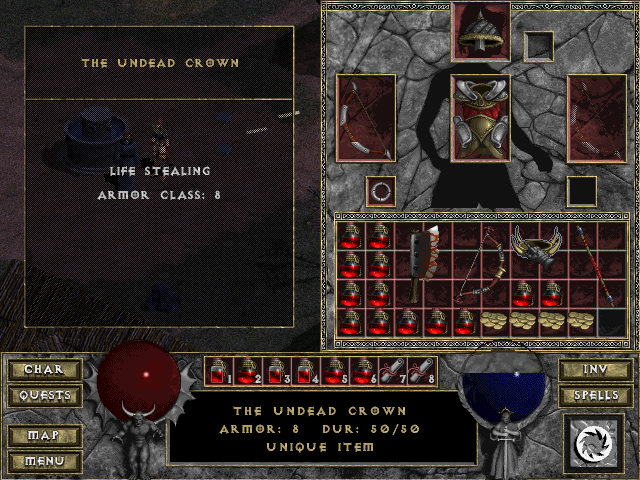 I was really excited to have the undead crown with life stealing, but @GalaXyHaXz ruined it for me by telling me that life leech doesn't work with bows!

Laura has completed the game.

It started to get a little difficult one I reached level 9 since the Lava Golems and the other creatures threw big molten balls at me when I didn't have much resistances. So I had to start using gear with +res. However, soon after I found a Book of Mana Shield and then the game was basically easy after that. I switched all my +res gear with other types of gear (+vit). I had a lot of money that I saved up since I found a lot of unique items and I picked up and sold a lot of magic items. I had so much that it wasn't good for me to have all that gold taking up inventory space so I just dropped it on the floor next to cain for easy access (The floor became my stash). After that I just stacked up on mana pots and kept a lot of mana pots in my inventory.

I found a few bow upgrades, and a very nice helmet. Other than that, there wasn't much.. I just cleared each map all the way up to level 15, killed Lazarus, went to level 16 and cleared the map, then activated each of the levers, and eventually I killed Diablo. The Diablo fight was very anti-climatic since my Rogue was already hitting him from very far away (He was off screen but my arrows seem to travel forever so I just listened to the audio of the monsters being hit rather than visual indications). After killing a few monsters Diablo decided to follow me, I just tanked him with the mana shield and he kept flinching when I attacked him. After about 10 shots, he was dead.

Before the Diablo fight, I was scared that I would lose all of my gold in the town (Like if the game finishes and doesn't save then GG), so I ended up having 50% gold inventory and 50% mana pots for the fight. When the game was over, it kicked me back to the character screen, but when I resumed the game it seems to have left me at my last save before I killed Diablo. So I just went back to town, picked up all of my remaining gold (Or as much as I could), and then just re-made the game. Since this is Normal difficulty and there are no other difficulties without some workarounds, this character is basically complete.

I'll probably start a Warrior soon. Sorceror is not necessary since I believe I beat the game with one last year.

NOTE: None of the gold or items in this game is duped. I actually saved that much money by collecting and selling items. Since the gold takes up inventory space, I had to drop the gold in town for most of the game so I could have space to pick up other items. 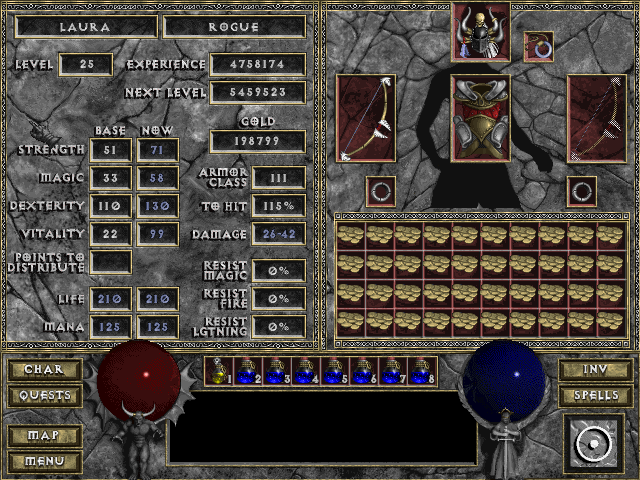 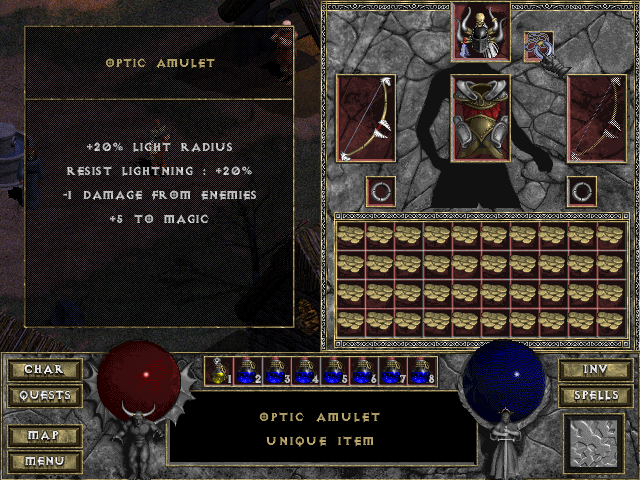 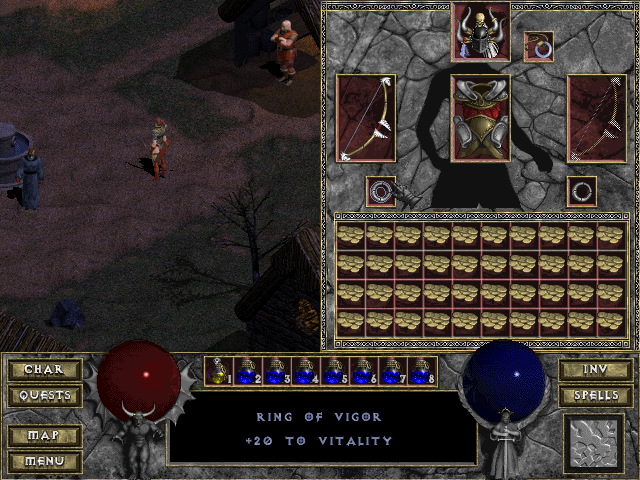 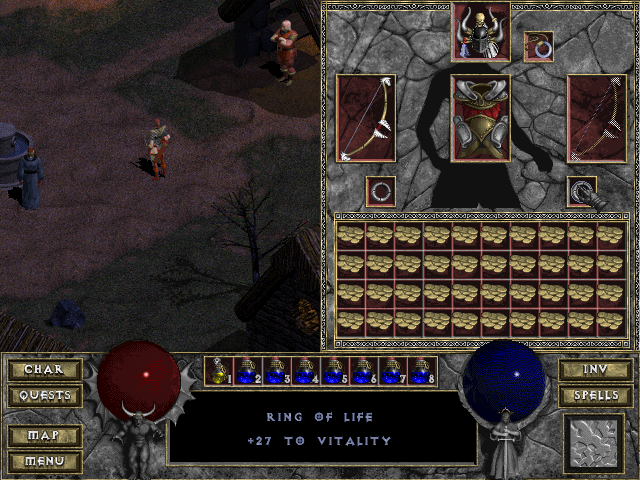 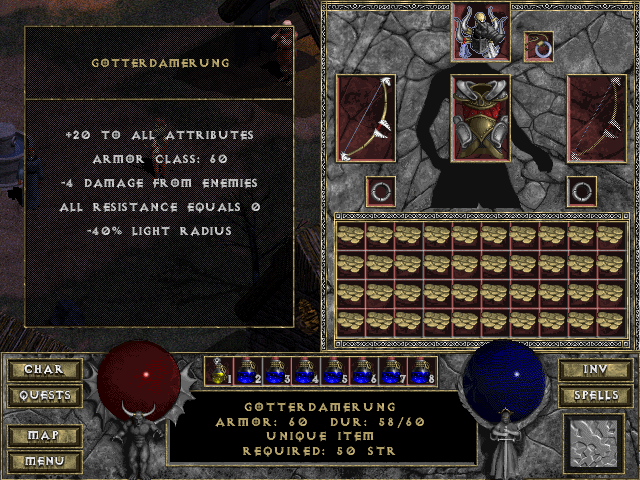 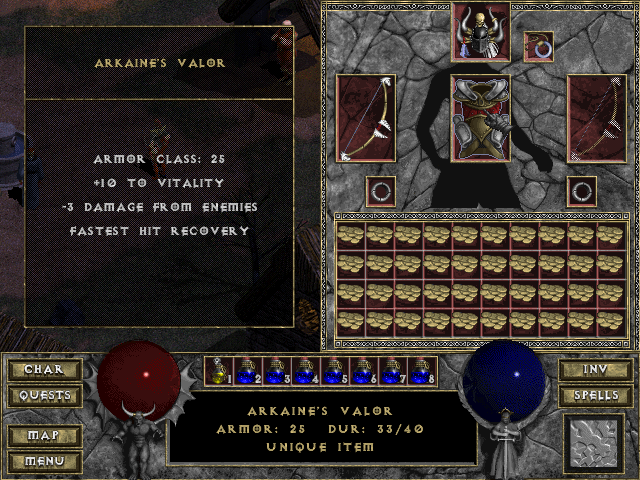 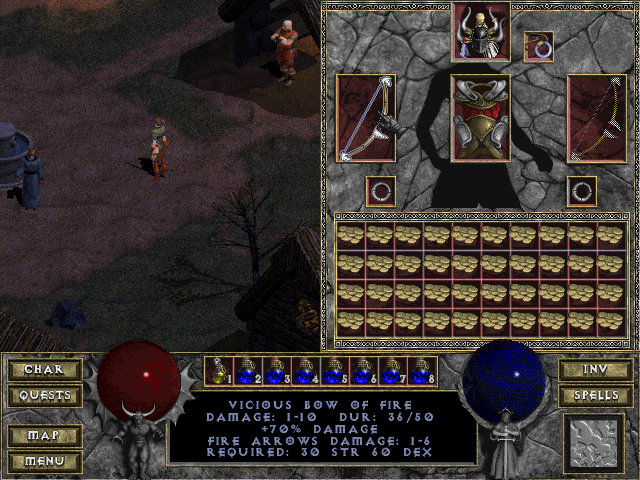 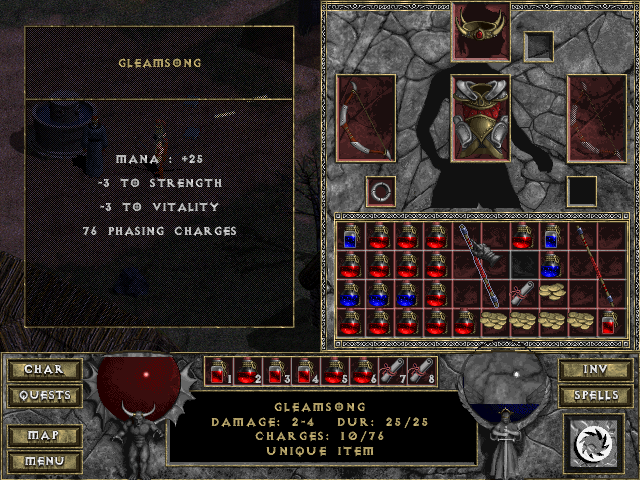 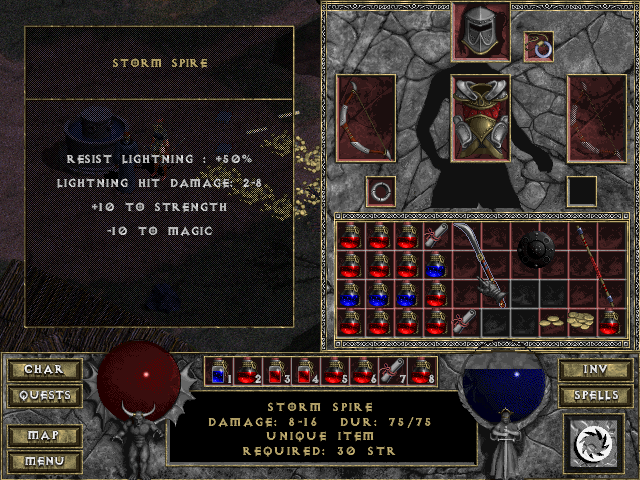 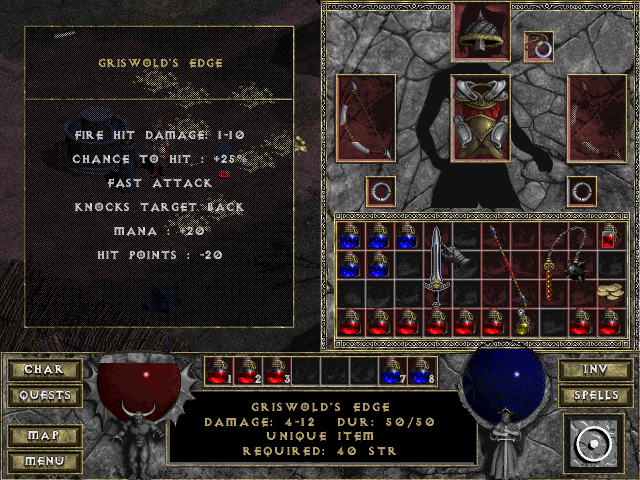 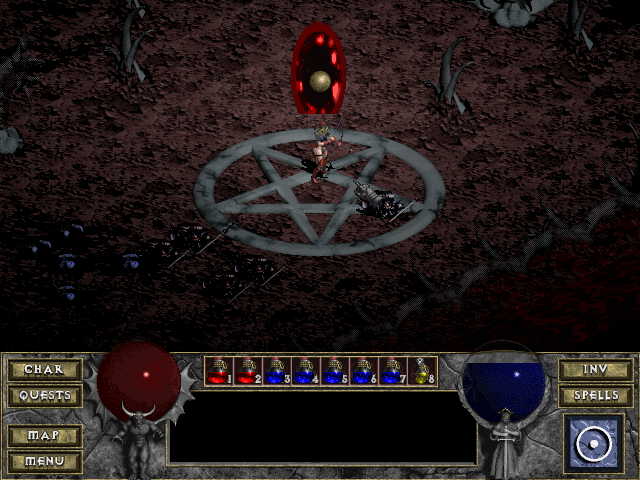 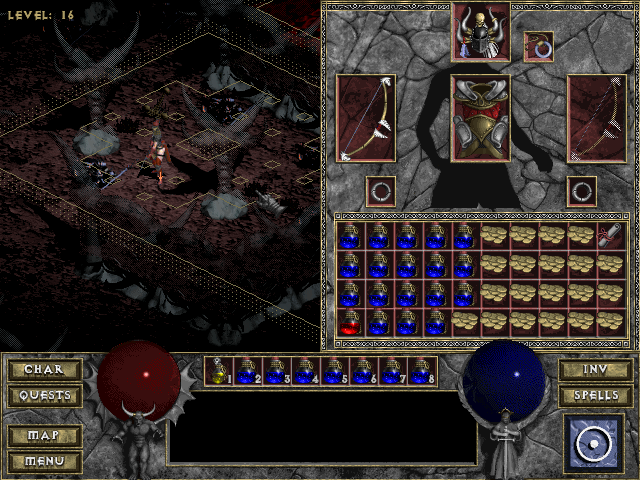 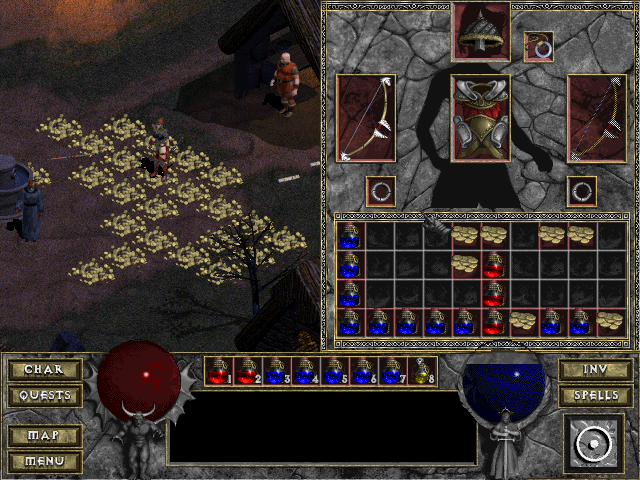