Just to let you know that the run has been called off this evening due to life things and will resume next week. Next update coming soon.

BNet was very unstable. In the end we only managed to do 20 minutes before calling it a day. So you didn't miss much by not having a game, if anything.

Really? that's a bit weird. I wonder what was going on?

Last night's run kicked off pretty well and we had a full group.

We started at the City of the Damned in Nightmare and jumped straight down in to the River of Flame, flying through quite literally obliterating everything in our path. We got to the Hellforge and smashed Meph's soulstone, and then onwards to the Chaos Sanctuary after picking up the final Waypoint. Again, we hammered through with nothing seeming able to stand in our way. The final seal was popped and Diablo had arrived, wa ran in and in the blink of an eye he was down, dropping some tasty loot.
We then cleared the Nightmare Cows and moved on to the final difficulty.

Hell has now been started, we ventured out of the Rogue Encampment and in to the Den of Evil. This was cleared and another Skill Point gained. Out in to the Cold Plains to punish Blood Raven and then a clear of the Mausolium and The Crypt.

With five minutes left in the game we blitzed through and grabbed the Stony Field Waypoint so we start next week on the front foot when we start the search for Deckard Cain for the final time.

The run resumes next Monday.

Everyone is currently around Level 60.

So far, nothing seems to have been able to even vaguely compete with the power of this group. It will be interesting to see how we hold up against Hell Difficulty.

Spiritspawn said:
So far, nothing seems to have been able to even vaguely compete with the power of this group. It will be interesting to see how we hold up against Hell Difficulty.
Click to expand...

Casters... it's your time to shine! (Yes, I see you AFKing in the back) 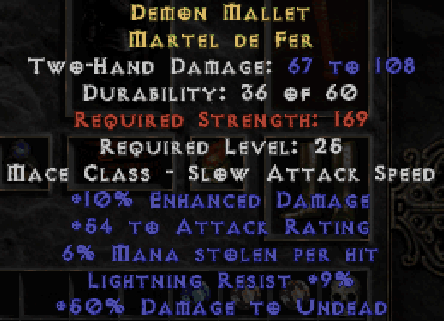 Talman said:
Casters... it's your time to shine! (Yes, I see you AFKing in the back)
Click to expand...

Oooofff, I've been rumbled. I'm just preparing for the PvP at the end. .

No run last night as I think everyone was at GoT parties. Hope you all enjoyed yourselves (No Spoilers Please.)
The run will resume next Monday.

Apologies for the lack of an update last week. I was unable to make the session so the group went on. It seems like Act 1 moved forward Deckard Cain was rescued for the final time aqnd the Countess destroyed. However... A run in to The Pits resulted in the death of Talmie.
From what I understand he died fighting to the last, popping potions and smashing everything he could before he fell.

Last night the group caught me up, and determined to avenge the loss of our fallen comrade we ventured forth through the Jail and killed the Smith.
We head down in to the Catacombs grabbing Waypoints, popping potions and spamming Statics, Novas, Bone Spears and with asdf_hedstrom berserking everything in his path.

Level 4 and Andariel is here for one last fight. We cleared the room before, swung open the doors into her chamber and rushed in determined to end her quickly. Static dropped her health bar quickly, and with Decrepify slowing her, and some serious battering she fell. As her smoking corpse fell the juicy yellow loot popped out, which turned out to be as useful as a hole in a bucket....

On to Act 2 and a clear out of the sewers to grab the Book of Skill, and out into the Rocky Waste to clear the Tomb. Finally grabbing the Waypoint at the Dry Hills to end the session.

We did find a unique ring, which provoked some debate about who should ID it in the hope of the SOJ... It turned out to be yet another Manald Heal.... That's about 3 or 4 of those damn things that we've got and no one needs them..

There will be no run next week, but the week after we hope to get to Act 3.

I should have followed my instincts and retreated

Spiritspawn said:
So far, nothing seems to have been able to even vaguely compete with the power of this group. It will be interesting to see how we hold up against Hell Difficulty.
Click to expand...

Guess I spoke too quickly about that.

No run last night as the whole group were not available. At the moment we feel that it's super important to have a full group so that we're able to push through Hell Difficulty.

Next week the run resumes.

We got together last night for the Act 2 push, a full group (minus our beloved conviction pally) and headed out to the Halls of the Dead for a clear out. Smashing our way through the deserts and in to the dreaded maggot lair, which went suprisingly well.
We made our way through the Lost City, and in to the Claw Viper Temple, smashed the Alter and we headed down in to the Palace Cellar which was packed full of Champion Squads. We entered the Arcane Sanctuary and ran through to destroy the Summoner....

We ended the run at the Canyon of the Magi Waypoint ready for a tombrun and Duriel at the start of the next run.

There will be no run next week as we are requiring a full squad in order to continue. I anticipate that we will need about another 3 sessions in order to finish run.

Everyone is around level 69-70

Edit: We would have finished Act 2 last night but BattleNett decided to throw everyone out of the game through a horrible desync while we were surrounded by Champion Mobs. Initially we all assumed we were dead. but apparently we lived to fight another day.
However the 10-15 minutes that we lost stopped us form completing the act.

Nice progress. And good to read that you are all still alive, despite BNet issues and other horrible monsters .

nice going team, I am now your ichiban no fan~ (number 1 fan)

A month since the last update. How is it going?

We got to Guardian last week with our group, but unfortunately had two deeds a few weeks back. Since we were off ladder by that time, those got replaced by backup characters. Next week we'll start a new iteration, the theme this time being 'all casters and caster (read: Act 3) mercs.
You must log in or register to reply here.
Share:
Facebook Twitter Reddit Pinterest Tumblr WhatsApp Email Link
Top