Howdy! I realize the thread is ancient and the last post more than 4 years old, but after looking around for a bit, this thread still seems to be the best place for collected info specifically on 1.06b.


Anyway, big thanks to Ragnarod for making the guide, it's been great to have such a solid reference to get into the patch.

Secondly, and the main reason i'm bumping the thread; I figured I'd dump the breakpoints here, in case someone else ends up giving 1.06b a try, and stumbles into this thread looking for some info.
I had been looking for the breakpoints myself, but just wasn't able to find any tables. The best info I initially found was actually posted here by scrcrw (#21). Perhaps the tables are out there somewhere, but I figured that by the time I would have found them, I could've made them myself already, so that's what I did.

All formulas/breakpoints changed with 1.07, and I believe that they did not change again after that, save for a few specifics (like Lightning). I assume the breakpoints were the same from 1.0 to 1.06b, but my only pre-LOD experience is 1.06b, so I can't confirm.

Note that in 1.06b, all attack speed "modifiers" are simply grouped together as additions or subtractions, meaning there is no difference between weapon IAS, off-weapon IAS, base Weapon Speed, or IAS from skills (including Holy Freeze).
And for those who are familiar with the terms: EIAS, EFCR, EFHR and EFBR do not exist in 1.06b.
Because of the above reasons, you want to refrain from using 1.14 calculators or tables, as they will not be correct for 1.06b.

Edit: Since posting the tables, I've edited in a bunch of additional info at the end of the post. If you plan on playing 1.06b, you might want to scan the text for information relevant to the class you wish to play, if only to avoid wasting skill points. I assume that all information in this post (and the guide itself) is also true for 1.05.

160 is the maximum possible FHR, and comes in either 10, 20, or 30 (Bloodfist only). The animation will only play when a single hit deals more than 1/12 of the player's maximum hitpoints in physical damage. This is calculated before Energy Shield, but after Bone Armor.

Compared to later patches, blocking is a bit awkward in 1.06b. Besides the fact that the only item that provides FBR is a weapon, the blocking animation will only play when a missile would otherwise deal more than 1/12 of the player's maximum hitpoints in physical damage. This does not mean that you do not block other attacks, it's just that the animation won't play.
For the above reason, blocking is even more powerful than it is in post-1.06b Classic. Especially the Paladin is in a very good spot, while the other classes will typically want to use Twitchthroe.
As in other patches, only hits that carry a physical damage portion can be blocked. 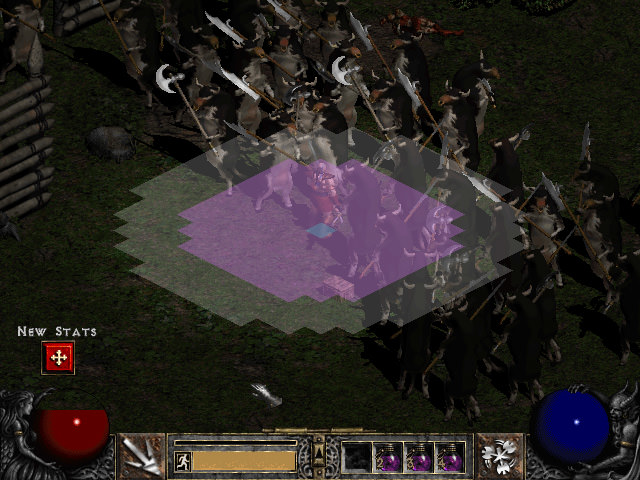 The white area is the search radius of Whirlwind, while the purple area is your melee range against size 2 targets (like cows) when wielding a Lance. Imagine the actual tiles that the cows occupy (similar to how the Barbarian is occupying the blue tile), then imagine whirlwinding through the crowd; it's very likely that at any given time, there will be about as many cows in the white area as there will be in the purple, meaning about half of your "attack-frames" will go unused. (The blue tile is just there to highlight the center - you can in fact attack targets that occupy the same tile as you.) On the screenshot, there seem to be 6 cows in the purple area while there are 8 in the white, so had this been an attack-frame, there would be a ~57% chance it goes unused. This edit shows how bad it is when using a Martel de Fer against cows.​
Last edited: Jul 11, 2018
You must log in or register to reply here.
Share:
Facebook Twitter Reddit Pinterest Tumblr WhatsApp Email Link
Top