I wasn't being serious about the bowzon idea, but thanks for coming up with some numbers!

Sadly I found another cham last night, so I have 2 chams (and 2 jahs) and no bers; no enigma. Sad panda, might need to start a trading thread before this shindig starts.

thefranklin said:
I wasn't being serious about the bowzon idea, but thanks for coming up with some numbers!

Sadly I found another cham last night, so I have 2 chams (and 2 jahs) and no bers; no enigma. Sad panda, might need to start a trading thread before this shindig starts.
Click to expand...

Thy, can you ban this guy please?

pharphis said:
Thy, can you ban this guy please?
Click to expand...

It is like that guy who used no extended stash and used to vendor DF and DW etc...

Perfect, off to find 400 gem shrines!

@Clervis, I added you too..

Are you gonna try to buy HR's from the councils?

Cyrax said:
Are you gonna try to buy HR's from the councils?
Click to expand...

With my negotiations skilzz should be easy....

On a more serious note, Gheed has a certain item in his infinite-spaced magical wagons that I need ! (3/20 poison&bone circ..), gambling one of those takes loads of gold

Gripphon said:
Gogogo. You can always run at p1 if p3 is too hard. Just make sure to spend at least some time rolling maps (30 min? 1 hour?) to have minions together since it makes a big difference for blizzard sorc compared to when they are a bit scattered around.
Click to expand...

That was quick, already in A3 Hell. Plenty of time to level her a bit before this starts.

Before I bother spending that time rolling a map, thoughts on which merc to use for a Bliz sorc? Options seem to be HF (but should be overkill if I can aim my Blizzards), Might (standard), Prayer (sustain I guess?).

Prayer if you use Insight, Defiance helps his survivability slightly, Might if you want him to finish off Toorc if you're not using Infinity. HF is an overkill considering most of them will be frozen by Spikes.

I have never used anything else than Might, so don't know how well does Prayer work. I guess if you want better sustain, then Prayer might be an option (I'm talking blindly here), otherwise stick to Might so your merc can help you kill stuff (top aura merc to have since I don't know how effective Prayer is).
Last edited: May 15, 2015

Prayer works very well on an Insight merc if the character has less than 2k life. Anything past that it's not really noticeable enough to be worth it. I used a Prayer/Insight merc on my Hammerdin a long time because I didn't want to lose my maps and it wasn't really helpful at 3.6k life. However the regen is very welcome on most of my sorcs.

But then again I play HC and prefer the bit of added safety of always having your red bulb topped, since none of my characters have reds in their belt. I only use Might mercs on characters that actually benefit from the aura as well (Strafers, Zealots, Summoners etc.).

For blizzard sorc 2 things matter when we talk about safety: one is minion spawn locations, and other is resists on sorc. Minions should all be tightly together if possible so you can tele next to them, but out of their attack range and kill them with blizzard. As for resists, there are few possible ways to achieve maxed resists (not poison, its irrelevant), and I believe both CoH and Umed/jeweled Vipermagi do the trick. On top of that, one could use absorb amulet or helmouth gloves to heal from hydras. That kind of sorc would be unkillable unless you tele into the pack with mistake. Otherwise you probably wont lose a single life in whole run, or even 100 runs.

Assuming average rolls of everything (30+ allres Vipermagi plz), she would have 155 cold and lite ress, 120 fire ress + there are res from the boots I didnt count + from inventory you could use, so easy to max for anyone I believe. Fire is not important since Hellmouth gloves will heal you with 120 fire res anyway.
Damage of such sorc with say 5 skillers in inventory and average rolls of facets and Nightwing's would be ~ 8600 dmg according to skill calculator, or 8900 if you use 6 skillers (and I have ~9700 on mine since I don't use battle command and only 4 skillers, but difference is rather small). So Fathom is not really needed after all. That kind of sorc + Infinity on merc would eat Travincal alive + would be super safe, just make sure to roll map where you can safely tele next to minions and blizzard them.

So 105 fcr, nice mana, great damage, cold absorb + 90 cold resist if not conviction, fire absorb that will heal you, maxed lite ress. Only downside is you don't have MF (you could use Gheed + War Travs and make up resists with small charms), but if you don't care about that...
Last edited: May 16, 2015

I just finished a 20 hours pre-RFO session to see how my char goes. These are my results:

Yes, I would've won the previous RFO which is funny considering the lowish amount of runs I've made. It would be nice to have that luck during the real RFO, but I doubt it will happen. I feel really happy about this anyway, the barb is a killing machine and the merc is now equipped with a +87 fire res/+15 ias helm, he's pretty tough to kill now. Also I'm growing more and more efficient every time, and I've learned to manipulate spawn location so that the council is always clustered outside the temple. But I'll take a break from running trav now, I think I deserve it.

Did you by any chance collect pgems? Gieb data if you did.
As for manipulating spawn location, I've seen only 1 simple rule here. 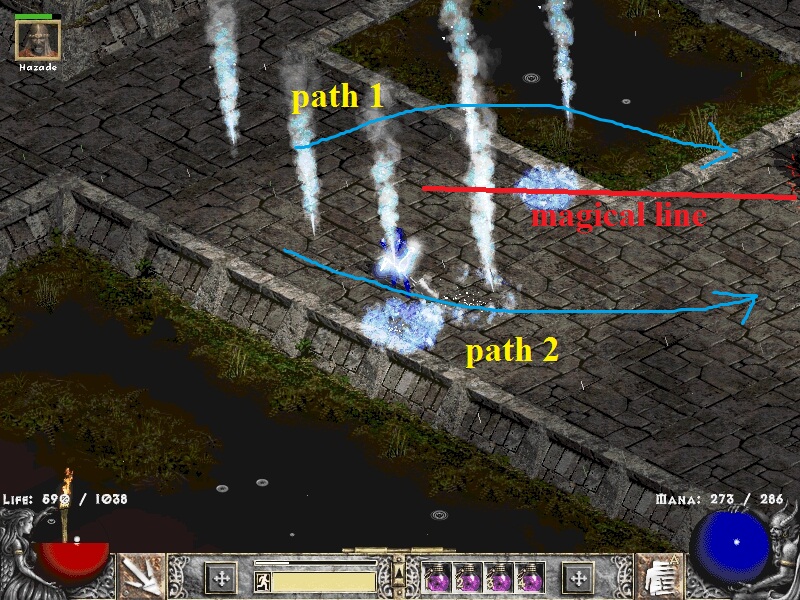 Red line is "magical" line that determines spawn locations of travincal d00dz. Its not precisely placed, but its there somewhere at that corner of that mini-swamp-lake. If you tele north of it aka path 1, spawn locations might be different than if you take teleporting path 2. I tested this on 3 maps and it was always like that, but might not be strict rule. On my map I make sure to tele south of that magical line, so I never get weird spawn locations on map. Some players take always north path etc.

There might be more magical lines like that, but I never noticed where they are. Generally since you want to get as fast as possible to travincal dudes, I think this magical line from screenshot is the only relevant. If someone takes longer path first going south then north, or east then south, he might be victim of more magical lines with weird spawn locations, but why to teleport with longer path anyway...

Also hopefully you didn't burn yourself out, keep energy for RFO! I basically don't play diablo these days apart of pvp stuff, so I can aim at hitting at least 40 hours during RFO aka having 2 batches of running.
Last edited: May 17, 2015

You have a magical line to help you? No fair!

At least ectasy or whatever it's spelled is using up his runeluck.

Yeah the magical red line does indeed exist, and I was able to keep a constant external spawn by moving slightly below it when teleporting the first and second time, then after that it doesn't really matter where you go, the council is waiting for you always in the same spot. When I was taking the other path they were spawning inside the building instead, in front of the stairs. At first I didn't realize my movements were influencing the spawn, but then in a particular run I remember making a weird path (crossing the line at the beginning maybe?) and finding a 3rd pattern where they were half in and half out the temple, never seen it before.

Sadly I didn't collect pgems, so no data... and no, I'm not tired of doing Trav, I mean just look at the finds! I'll do some pit runs instead, need good bases for ebotd - hopefully I should be able to get the other Cham, or get really close to it, in a single batch.