That shield is noice @DiabloTwoinDC

It could be a stupid question, but would Spirit be out of the question in such a shield? Or would 4 facets be better?

darkstarhub said:
It could be a stupid question, but would Spirit be out of the question in such a shield?
Click to expand...

RW in a blue item? That would be insane.

@DiabloTwoinDC gieb I'm looking for a similar one, I'd also be happy with a one with +Life or maybe Deflecting mod.

Next sockets reserved for few crafts and maybe some uniques/sets.

I found a wicked new sword while I was leveling up my barbarian. The only downside is that it has a 1% chance to download blaster worm virus upon striking, so I have to be very careful when attacking.

Duh.....complete brain fart. I was just thinking of the four sockets and the plus skills on it.

I found a grailer for the 99'er last night, and definitely an item I have not found for a verrrry long time. I am pretty sure this item was in the Biggin's Bonnet category for me, in that I found it a long time ago and its been a drought ever since.

Those pesky TC3 items. I still need several more on the 99'er grail.

This ring will definitely work for some twinking action, and I believe those Dim Vision charges could be put to use even. Too bad it wasnt Fire resistance along with the Lightning.

Had a fairly good week in Lower Kurast.. around 200ish runs for these. Funny part about the runes is they all came from non-super chests.

The last couple of days have been quite okay. I have found my Grail -13 (Frostwind) which was pretty much expected at this stage. I stated somewhere else, I am still missing a lot of the biggies, though I have been lucky on finding Deaths Web in a lucky Pindle night on my ~150mf Java while leveling some 2-3 months ago. The next day I found my first Griffons ever follow by not one but two more Griffons in the following weeks with my Hammerdin in the CS.

ArtOfTheHammer has taken over my Grail Hunt completely for the time being. My Blizz Sorc has seen months of AT and I'm kinda burned out on her. CS is not only a refreshing experience and offers a tad more variation than AT - it's not really much slower in terms of unique monsters / min (and Redemption is crazy OP). The RoF sections offers up to 4 boss groups on my way to the CS and good runs net up to 11 boss packs (excluding seal bosses). What still slows me down is I do all seals + Diablo because I still miss 5 items Diablo is capable of dropping (Herald of Zakarum, Bul Kathos Ring, Schaefers, Spirit Ward and %@#$! Knell Striker). And to be honest it's good to have some golden drops for the cupboard. I am not a crazy hoarder but I keep track of some "standard" and rare items I find during my Grail journey (Harles, Lightsabres, Titans, IK armors, Gris sets except for armor, Facets and many more).

The last 2-3 weeks offered quite some time for excessive CS running. Except for the mentioned grailer and some Mals, Ums and Lems the drops were kinda dull. With a few exceptions:
- Vizier was kind enough to drop a Jah rune which is my 3rd overall Jah. Will go to the stash and find use eventually.
- I'm still crafting caster amulets to find a replacement for my +1/10/@ pala amulet. Looking for +2 / 20fc / 10+fire res / 15+mf - I crafted 60 amulets in the last weeks and there were some cute ones for nec, sorc, druid, ... basically for every class except pala. Then finally I got a +2 with 10 fc without fire res. Doesn't allow me to switch but it reignited my hope for my perfect amulet.
- A couple of nice rares, two of which I wanted to screenshot and share 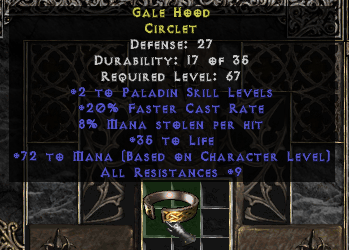 I wish it would have dropped with 2socs instead of the ML. It's still a nice circlet but I stay with Harle right now - switching the 20fc from Arachs or Trangs doesn't offer boni from Goldwrap or Chance Guards that outtrade Harlekins stats imo. 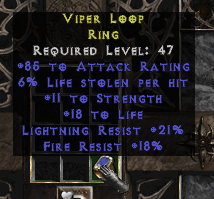 I really like that one especially with the low lvl requirement and light + fire res. Let's see what char I will use it on.


Might share some more of my crafts / rares if you guys are interested in these kind of items. Gonna go back to CS now, I got that gut feeling that a big drop is waiting for me
X

Spirit Tournament Vita-Singer finds an Ist (at Hellforge) to go along with the Vex he horked in Act II!

ArtOfSenf said:
Gonna go back to CS now, I got that gut feeling that a big drop is waiting for me
Click to expand...

Well my find of today was my first ever 40 life skiller and +1 summoning (Dru) it was! Not particularly happy nor sad about it. It's kinda encouraging to start a summoner druid though I have very little experience about the viability of such a built. Gonna do some digging.

Ah and by the way, today is Dracul's day. Three Dracul's Grasps in less then 6 hours from CS. Whish they were actually useful ;-)

ArtOfSenf said:
Well my find of today was my first ever 40 life skiller and +1 summoning (Dru) it was! Not particularly happy nor sad about it. It's kinda encouraging to start a summoner druid though I have very little experience about the viability of such a built.
Click to expand...

Congratulations! By coincidence, I recently rolled a 37 life Druid summoning skiller, and discovered that I already had three other Trainer's GCs on hand. I'm thinking of revisiting a Hunter/Summoner build I played many years ago, wielding a Shaeled Buriza. He was fun.


ArtOfSenf said:
Ah and by the way, today is Dracul's day. Three Dracul's Grasps in less then 6 hours from CS. Whish they were actually useful ;-)
Click to expand...

I recently (December 11) found my first ever Dracul's in sixteen years of playing, and I immediately put them to use. But I suspect it's not a use that would appeal to most players.


All D2 players are at least a little obsessive, or we wouldn't still be playing this ancient game, right? Well, one of my obsessions is making the most effective possible use of the interaction between Poison Javelin and the slvl 15 Venom from "Treachery."

Venom's damage rate is applied over Poison Javelin's duration, yielding more than 6000 damage over 8 seconds at slvl 1. And while the damage per second doesn't increase much, at slvl 4 the damage over 14 seconds is over 11000. I investigated the effectiveness of the combination with three of my Fending Mistress o' Minions Javazons, and I finally got it as close to optimum as I can with Thirda_Fender, after equipping her with a pair of javelin stacks with the Fool's mod, giving her >10K AR.

Then I realized I could potentially increase the damage per second of enVenomed Poison Javelins if I had Open Wounds working in parallel with the poison. I swapped Thirda's "Rhyme" shields for Swordback Hold Barbed Shields (50% OW), and her Goblin Toe for Gore Rider (10% OW). With her current Blood crafted Mesh Belt (7% OW), that's 67% total OW. I figured that 70% was the best I could hope to achieve-- until Dracul's dropped. Thirda's up to 92% chance of OW now.

And I'm still working on the belt.

Zyr said:
I recently (December 11) found my first ever Dracul's in sixteen years of playing, and I immediately put them to use. But I suspect it's not a use that would appeal to most players.
Click to expand...

I do like that leech ring, especially with the level requirement

ArtOfSenf said:
Didn't mean to offend you
Was just my personal take on Draculs hehe
Click to expand...

I'm not offended in the slightest!

On the Realms, Dracul's are prized for the Life Tap's usefulness against DClone and in Über Tristram. But I got along fine a few times in ÜT and many, many times against the Clone without them, using wands with LT charges instead. In FAMland, Dracul's are indeed chiefly of interest for highly specialized purposes, such as mine.

Decent tri-resist boots. I always like when I can squeeze out a little extra dex from my boots, but definitely wish one of those resists was lightning.

Rlvl 18? Into the twinking stash it goes!

@xoti oh I'm so jealous of that GC! There's only few skill trees where I'd take a 45 lifer instead of Chilling with 40 EG%!