Sorry for being late to the party, but I've been out of town the last week. And I also wanted to convey congrats to @pharphis on the pharblade. Given the low odds of not having found it after this long, you're definitely due for that Tyrael's in short order

krischan said:
I think that trap laying speed isn't that important, 11 or 12 fpa are good enough to my taste.
Click to expand...

I can see that, in SC, 11 or 12 fpa might be fine for LS and DS. As a HC player who relies heavily on Fire Blast, I wanna fling Molotov cocktails as fast as possible. I can live with 10 fpa, but always strive for 9.

No grailer (-15 at the moment) from CS tonight, but 2 Lo runes! 2nd dropped like 4-5 runs after the first. That's 3 total in stash with another 3 fortitude already built.

Time to build some Griefs, it seems .

Looks like I'm not really into melee builds so let's see what we end up with.

Playing around with my Schaeferdin, looking for bases, running pits at p8. First one of these - brings my Rune Grail to -2.

Been a good rune day. Did a couple hundred LK runs and added Pul, Um, and Ist to the runes found above.
Last edited: Dec 13, 2018
X

Nice, Jah is the one I havnt found yet

Edmond Dantes said:
Been a good rune day. Did a couple hundred LK runs and added Pul, Um, and Ist to the runes found above.
Click to expand...

Good rune day indeed. Jah and 2 Vexes over the course of about 10 minutes? I'd say that's an understatement!

Yesterday I did not find any rune higher than Um in the CS. But that's not too problematic: after a long day of running, I found my first ever windforce (Grail -14), my 3rd griffons within 2 months (13/19), gris Corona #4 and 2 shakos. so it was elite helmet day with a WF as the icing on the cake. WF was my 2nd last run for the night so pretty happy with that as well. Might see usage on my bowazon but she is only a2 normal and a side project I don't push too hard.

Second in two days, and with the two perfect rolls on this one now I feel compelled to start planning a kicker... Either that or trade it away and push the thought out of my mind.

jonnyphive said:
Good rune day indeed. Jah and 2 Vexes over the course of about 10 minutes? I'd say that's an understatement!
Click to expand...

I'm sitting on 7 Surs from LK running, so I'm 99% sure Enigma will be the next Runeword I make.

@Edmond Dantes Sounds like some pretty steady rune luck overall for you. That's great. Not that I can complain; I've damn near tripped over 2 Ber's while not looking for them in the past couple of months. Haven't even built my planned LK runner yet! But that's next.

Holy Hannah, it must be Christmas around here. Time to end my brief respite, and get in on this Runeganza!!!

pharphis said:
I WAS ONLY KIDDING GUYS.

After the long search you should do something with it.

I was thinking the AT conc barb that someone made and performed well with in an MFO or 2.

@jonnyphive nice drop man!!! That item is one of my overall grail items thats never dropped for me in all my D2 playing time.

I did find 2 more grailers for my 99'er over the last few days.

I didnt get a screeny of the roll, but it rolled on the higher side of average.

I've been looking for one of these, but this one is merely a placeholder in the grail gomule stash for now. That is one poop roll.

Ok so I'm so hyped right now. I was thinking about just laying down and watching South Park and Chapelle's Show until I fell asleep. But I am like, ok one more LK run, because I have had some lucky things like finding Ber on third run in morning and yesterday or day before I found Vex on very first run of very first chest of day.

So I finish LK and nothing there. For some reason I decided to run over to Pindle, because I get in moods sometimes where I find nothing on my original goal and I am like well I will go over here first. Pindle dropped nothing, but one of his buddies dropped a Vipermagi.. of ours it ends up being ethereal lol. but whatever, I have a 35% um'd upgraded one already anyway.

I still wasn't satisfied, and decided to go down the stairs by pindle. Now this has always been one of my favorite places, it has panned out far better than AT or Pits ever have. I have found unique Sacred Armor there (of course Templar's lol), on this exact sorceress I found Death's Fathom from a group I popped off an evil urn in that level. I have found many other goodies over there years spanning back to when I played on b.net. The place has a soft spot in my heart.

Now while I was doing this run, I was thinking about how great it would be to have a Griffon's to get me motivated to build my javazon for cows high level, but I knew I would never find one with the last however many years since 1.10 has been out as a good indicator. Well I had teleported around quite a bit at random and killed a pack and BOOM! I took the screenshot and the game freezed for like 3, miserable seconds, that felt like a lifetime. But fortunately it was just one of the shots that happens to do that to me every once in awhile.

Enough rambling and backstory, I always like to share or hear the story of good finds lol. So here is what I just found and could not wait to jump on and show it off! 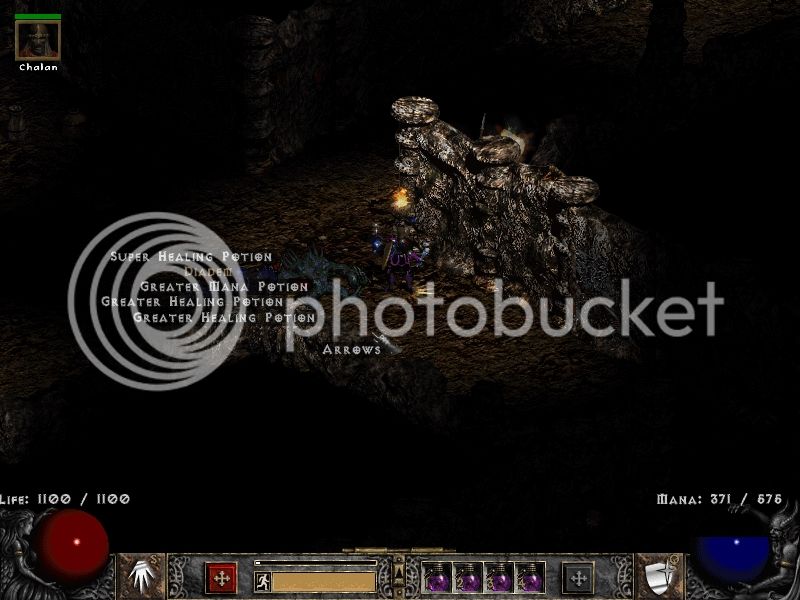 Edit: I hadn't checked the stats at the time of posting, due to fear and the fact that I have always thought that uniques look so much more sexy when they are unidentified. I think it's from a 1.09 thing where people wanted UNID items. So I keep mine unid until I use them.

Runes are raining from the heavens...

The crazy thing is both of those dropped in LK, neither from a superchest. It's been a good week.
Last edited: Dec 15, 2018

Should I wait for an eth Andy's? I have a non-eth this would be lovely in...
I also have this one:

Maybe keep the 29% for an eth, and throw this one in the non-eth?