Today he is top of the my crew


If you do not know the significance of this, at level 93 all gambled amulets have a chance of being +2 class skills , only one of two ways to get these in patches previous DII 1.05 perfect skull recipe option. The other way is killing hell Big D and hell Big D is very stingy with rare amulet drops.

Also those who play 1.00 know that with no players command and with regular monsters that cap out at level 82 getting to getting to level 93 is a long process. I finally found a good map in a MP game with Urdar boss or champion pack at the bottom of the entrance stair case in the RoF in late Oct 2017 and have joined that map to all my toons wanting to max their level

I wanted to make a Necro with a strong CE and good crowd control as this makes a good farmer for multi player in 1.00.

He started as a IM / blood golem with summon hybrid and CE after watching some of the 1.00 videos and reading the guide. He is now a hybrid all rounder with what may seem a weird set mix of skills. IM /BG combo gives next to unlimited life vs melee monsters but you can still get killed

So why the skill pts allocation

I planned the skill set based on getting +3 skills from the gear. This is very achievable but a lot smaller than in 1.10+
It turned out that I managed +5 skills by L93 while maintaining a good MF and ok resists and 40 FCR. +5 skills is a decent amount for a 1.00 toon while balancing other stats

After learning about the monsters and levels

1. I needed some way to safely deal with hell De Seis and the other seal boss in a players 4 hell game while maintaining a 100+ MF. So I pumped B Spirit and Decrep as a way to help my revived doom knights or venom lords get the 1st corpse of the De Seis' pack. An extra Fast De Seis is difficult to kill unless decrep'd as they are all OKs. This build provides the only way I have found to quickly and safely do this. I could level this guy to 90 in self played MP games. This was slow but worked while I found a good map to level higher

2. By having the above , he can quickly run boss and champ packs in the RoF which is needed to get him to L93. The build is not totally finished but is good enough but will continue to being useful

3. CE does not reach over the lava so plan B is required to deal with them

P&B
CE is the main killer with it scaling with the players in the game.
B Spirit is very useful for getting the 1st corpse in multi player and for killing Storm Casters in the CS as CE does not kill monsters floating over the lava in the RoF or in the CS. In fact, there are many obstacales in Act 4 that often reduce the CE's effective radius. The CS is the best location for CE

Summons
In 1.00 Skellies are weak later game
RSM are used for minor alternative damage and distraction for the monsters
imho Revives are very good if you revive the right monsters.
SM provides a life and damage synegy to revives
Pts in GM work for all golems but BG, CG and FG are the most useful.
BG used mostly, CG in the cow level because the golem can wander into danger

Abyss Knights - This combo of melee and ranged attack is unbeatable. These can easily take down Hephisto with IM
Doom Knights -
Cows
Pit Lords and Venom Lords
Urders
Then any fast moving and attacking melee monsters from other acts

The main are IM, Decrep and Attract
Against cows start with Decrep and Terror. Once I have a few corpses switch to Attract and Decrep or AD

Thanks to Helvete for the 1.00 guide, Treeharl for the stories in 1.00 and the crew at the Classic 1.00 discussion thread for the ideas


Next project.
An Orb/Blizzardress 1.00 to lvl 90+ with same map layout in the same version.

Apologies for the wall of text

Congrats for achieving your goal! That's not easy job. I'm definitely bookmarking this, will be a good reference should I play some 1.00 nec.

Would be nice to see him in action.

I'm planning to continue my 1.00 adventures sooner or later

Thanks everyone for likes and support

@Grape I will look at getting a video capture for a laptop that has only a 128 MB VRAM Nvidia video card. Its an old rebuilt laptop. If I understand it video capture sucks a lot of power . I could create a short video of him running the champion pack and another running the CS on p1 until I am ready to lose my map with him

For video capture, what are we recommending that is light weight and does not attempt to take over your PC with unnecessary garbage and sign me up to unnecessary subscriptions.

@OldSoldier , the rare boots are one of the reasons to run 1.00. These are only lacking FRW to be amazing but are more interesting than putting on WT on every MF build

For items here are some found and gambled items . I have several mules with rares. This is the best far , only got 2 +2 rare amulets if I recall correctly

I use Bandicam and it has worked really well for me. The free version let's you record up to 10 minutes, but it's been awhile since I loaded it, so I'm not sure if something has changed since.

Looking for that IFT post! Great pair of EG% boots there. My Barb is a bit jealous. Different resistance(s) and would work really well for my 1.13 gold finding sorceress as well.
T

Thanks for the advice on Bandicam. I will give it a try this week.

I rarely post Classic find in the IFT . On balance I have the impression many current version LoD players preferred the TT players not to post TT stuff in the current thread. I should post these to the 1.00 Gossip thread or we create a IFT for pre 1.07 stuff.

Also It is just is takes a long time to put togther pre 1.07 IFT posts without the gomule or atma text dump feature. @fearedbliss started a char dumping util Alpaca but I now can not find the post with it with the search
F

@TedDeeBoy Alpaca isn't approved on SPF (Even if it is just GoMule text dump feature), so it is removed for now. But it wouldn't have helped your situation since Alpaca only dumps only some specific information for patches pre 1.10. It doesn't do a full dump (GoMule doesn't even dump anything pre 1.10).

@Grape You should check out OBS Studio (It's free and open source). That's what a lot of people use for streaming to Twitch. I also use this to record my YouTube videos or what not. 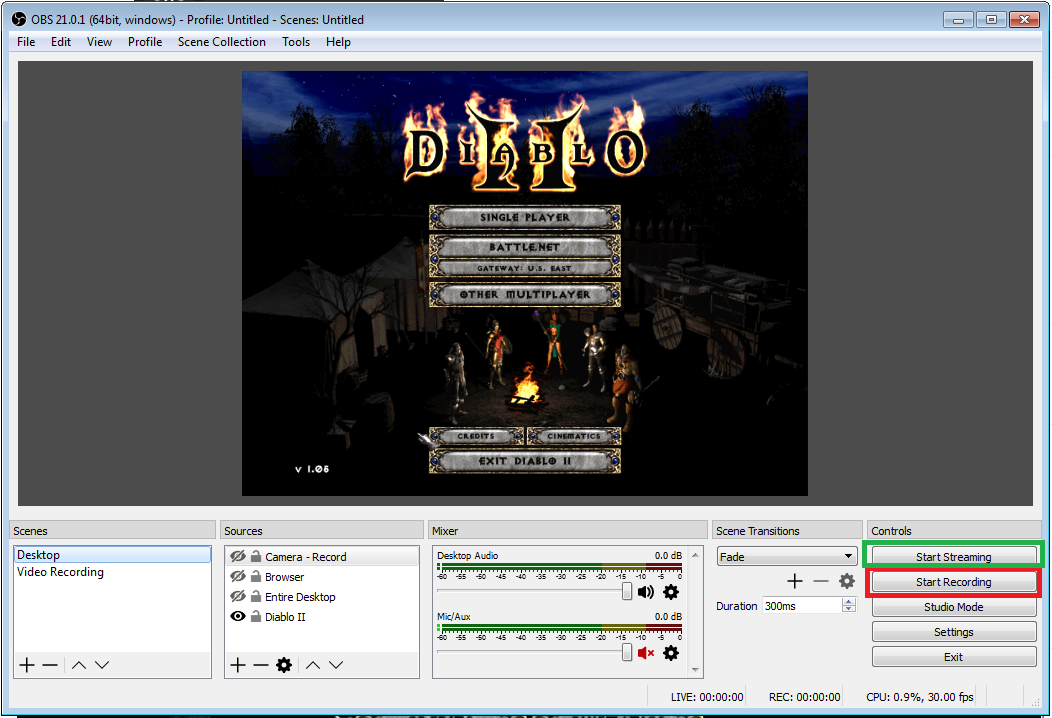 Nice read @TedDeeBoy i liked this tread a lot!
T

@fearedbliss Thanks for the advice with OBS . I got that working on the LT after some trial and lots of error and can record longer videos.

So here is Godoblood running some champs in the RoF. BTW this took 45 minutes to upload to which was very frustrating

@TedDeeBoy Glad to hear you got it working. You can change your configuration so that it only records the game window itself without having to see your desktop background. Just make a new game window capture and point it at Diablo II. You can also use a window capture as well.

To set the size, go to your OBS settings and go to the video section. In there you can set the resolution for both canvas and base to 640x480. You can play with all of that. But you can definitely get it so that you only see the game completely.

@fearedbliss Thanks. I did try this initially and kept getting error "game.exe, Cannot find the hook for the process" or something like that. I spent about 5 hours in total over two nights with trial and error with OBS. Eventually i got frustrated and found a less than perfect way to create a 3 minute video and that took another day after doing all of the setups required to create a youtube spot and to crop the each end of the video and upload it. Our internet is fast but the upload destination was set as Belguim , 12000 miles from where I am so it is the TCP window,distance induced latency and lack of a parallel upload process that is killing the upload throughput.