Disintegrate is flawed. His arguments were numerous, but his main point was that the laser beam moves too quickly, allowing the Wizard to hit anything on the screen in an instant. Bashiok replied at some length, defending Disintegrate’s function and its honor from the OP-slur. 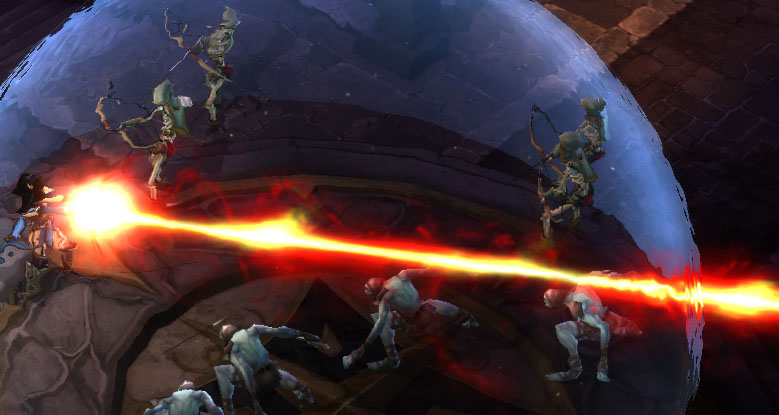 I haven’t had any problems countering it. The arena maps have a bit of

LoS just for that reason. Also, if you don’t have some kind of mobility skill you’re probably doing it wrong. Lastly it requires constant use of Disintegrate to build up to full power (damage) and a wizard sitting still for that long is just asking for it.

It’s a great skill, and can definitely be used to great effect, but the instant-on and instant rotation, in my experience, don’t make it so amazing that it feels cheesy when I get killed by it. It’s usually because I got outplayed. Disintegrate is usually an annoying chip away at health from range, or an awesome finish if you can combo a stun and the opponent can’t break out of it. There’s not usually a middle ground to use it. Having to stop for that long is just a bad idea.

Anyway, sort of tough to discuss when build potential is still such an unknown and likely will be for a while after release. Like Disintegrate with the

Obsidian rune makes it a short range cone attack that is super strong, so maybe a melee wizard would love it that way. It’s a good skill at its base mechanic, useful, but I don’t feel it’s OP.

The fact that Disintegrate instantly hits everything is the whole point. That’s what makes it interesting and different than other

Wizard skills; the trade off of damage and maneuverability for speed and piercing. It *looks* amazingly powerful, but the damage is actually pretty low, especially against large enemies (like

bosses in PvM), and it’s a very heavy resource drain. This wasn’t an issue in the Blizzcon

Arcane Power was essentially infinite, but it will be in the real game.

As for the function, like Bashiok said, it’s dangerous to use. Dis is great to get quick hits across the length of the screen, but it’s not a skill you can use while kiting or at close range, since you have to stop and stand still, and hold the target for a second or more to deal substantial damage. Players were getting away with it at Blizzcon since no one’s an expert yet and few Barbs realized that a Disintegrate-firing Wizard was a target to

Leap Attack towards, not run away from. 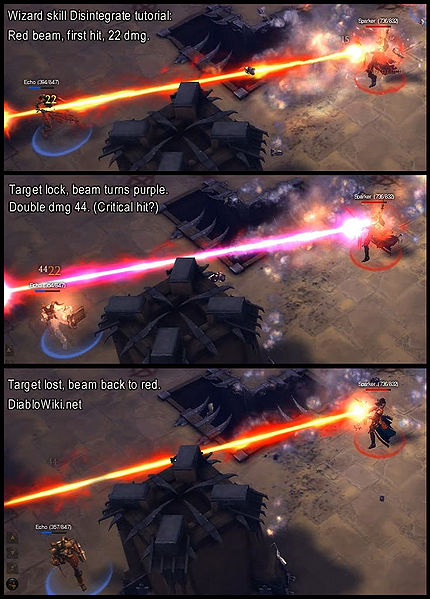 My opinion, as expressed in my Blizzcon PvP Article, was that a regular projectile spell, such as

Magic Missile, would have actually been more useful than Disintegrate in the Blizzcon Arena. I’d have found it more useful at least, since I could have constantly been tossing out MMs as I ran around, using foot speed to keep away from hideous creatures like

Barbarians, while my regular casts filled the area with damaging projectiles that kept on moving and hitting while my Wizard was on the move.

Contra the OP, I strongly oppose the idea that Dis should be changed in function. If the skill proves too powerful with more testing, they can easily add a bit more delay (like the WD has when using

Firebats) before the beam starts out, or before it powers up to double damage. The way it works is awesome; they just need to tinker with the math a bit to make it appropriately-damaging.

Incidentally, we’ve had a long-running and still unresolved debate about how this skill calculates damage. As frame-by-frame viewing of the Arena footage shows, the amount of time to lock on before double damage starts varies widely, and sometimes the ray turns purple and sometimes it doesn’t, seemingly independently of the damage being dealt. Check out the forum thread to read/join the discussion and view the evidence in compilation screenshots, one of which you see to the right.