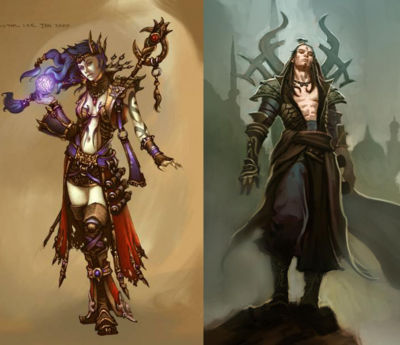 Just like we did a proper update on the Quests this Monday, we’re now putting the magnifying glass on the three

classes revealed so far. First off is the latest class, the

The Wizard is really the second class closely resembling a Diablo II ditto, after the

Barbarian, even if she has a new nickname. The Wizard is a

Sorceress, but with a little chaotic and arcane edge to her spells. She does the elemental stuff like a pro, but since she learned a thing or two in the

Jay Wilson‘s own words, she’s a Sorceress with a little pen & paper RPG feel. A lot like my halfling sorcerer in my Monday D&D sessions.

So, regardless if you love Sorceresses, or the classic

Disintegrate spell from D&D, make sure you check out the new and updated

P.S.
If you want to help out in the wiki, feel free to add more pictures to the Wizard’s media gallery, from Diii.net’s!