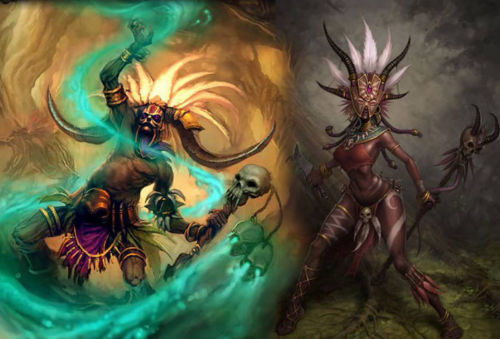 A lot of work has gone in to polishing up the Witch Doctor article enough to be properly introduced (once again). Following the facelift of the Wizards, but it’s finally finished. For now.

Our dear Witch Doctor was the second class to be introduced, a few minutes after the

Barbarian (who is still awaiting his face lift). It’s been argued he is the replacement for the Necromancer of Diablo II, which has been denied by Blizzard. Just dealing with the dead does not make a Necro! His focus is more combat oriented, with flaming skulls, locust swarms and flaming bats, but also includes a little bit of undeath with his (in)famous wall of zombies.

He has travelled all the way from

Tristram as an untrusted character, just in time to stop

Whether you just are a fan of the ol’ Necro, or want to send exploding toads on people, the Witch Doctor in our new and polished iteration!

P.S.
If you have time to help out in the wiki, add more pictures to articles from the Diablo 3 gallery! We even have a nice help page for how to add all sorts of pictures. Leave a comment here, or e-mail if you need further help.