April was a thin month, in terms of new Diablo 3 stuffs. Aside from Blizzard’s annual April Fool’s blow out and Bashiok’s forum posts (which were few but solid), there was little to distinguish the month. No interviews, no new Diablo 3 imagery, and not even any big fan controversies to fill the time.  About the best thing that can be said of April is that it brought us one month closer to the eventual game release.

The first few entries are below; click through to relive the entire month.

April 1st brought endless Diablo and Blizzard jokes and pranks, as usual. Diii.net was the first out the gate, with a fake press release announcing that BlizzCon 2010 was already sold out. It was a joke, but in a way, this would be the most merciful way Blizzard could do it. Better to find out the tickets are already gone than to waste a whole morning refreshing the Blizzard Store page, waiting in digital line for 5 hours, and then being told it’s sold out.

In non-fool’s news for the 1st, the first two Diablo 3 jigsaw images debuted, pieced together from hundreds of screenshots taken from the WWI 2008 gameplay movie.

April 3rd brought a closer look at the new and improved Diablo 3 Tomb Viper. How has the monster changed, and is it really a guy being slowly devoured by a giant serpent?

April 5th showed a few B.net posts about Diablo 2, one explaining how to set a default B.net chat channel, showing that at least someone is still working on fixing some of the issues about the game.

On April 9th Blizzard used their Diablo FaceBook page to ask their followers what they thought the fifth character would be. This was interesting since most of the people following D3 via Facebook are casual fans who aren’t really keeping up with the regular flow of news (since Blizzard never links to fansites). The resulting low-info predictions and requests were interesting to read, and we posted a selected batch of them in our news. Lots of requests for returning Diablo 2 characters, most commonly the Paladin, to our surprise.

April 13th brought news that at least some European Starcraft 2 players (Russians) would have to pay an additional fee to play the game online. Most D3 fans greeted this with a yawn, an unconcerned reaction that the more cynical Diablo 3 fans, who expect some kind of monthly fees for most D3 over B.net features, found frustrating.

On the 16th Bashiok put his foot into a bear trap of an issue; the suggestion that players might pay real month to revive dead Hardcore characters. Thankfully, from the opinion of most fans, Diablo 3 Game Director Jay Wilson seems to think this is a really bad idea.

The 21st brought news to cheer honest players, when Blizzard announced that they’d banned more then 320,000 Warcraft 3 and Diablo 2 accounts for using hacks and cheats.

Bashiok got in on the action on the 21st as well, replying to a question about character builds and skill trees by pointing out that there are no more skill trees, and explaining how Diablo 3 is designed to allow the most player/character/build diversity possible. 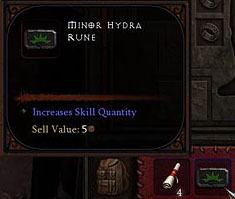 April 22nd featured one of Bashiok’s longest forum posts/discussions ever, when he replied to some questions about how skill runes modify skill functions and graphics.

April 23rd brought some of the best player-made art we’ve ever seen, when pictures of a fan sculpted

The 24th brought a great new Blizzard image gallery, featuring hundreds of pieces of concept artwork for their three game worlds. The gallery is even sortable by game type, a feature also extended to their fan art gallery. On the downside, that’s still far less searchable than a proper image gallery (like say, ours). Furthermore, they did not add any new pieces of Diablo 3 artwork; not even HQ digital versions of the 100+ we have in our gallery that we got from photos of the artwork in the Blizzard Museum at the last two BlizzCons, or other stuff thus far only seen in the Diablo 3 art reel released with the game’s announcement back in 2008.

There wasn’t any notable news after the 24th. I told you this was a slow/short month.