Ever since the little beasts appeared in their shrieking, cowardly numbers in Diablo I, fans have been wondering where all of the Fallen come from. This question can be asked about most of the monsters in the Diablo games, but unlike zombies and skeletons and ghosts and the various hellspawn demons, Fallen (as well as Goatmen and Fetish) seem more organic and biological. They’re not just summoned up from dust, snakeskins, and old socks, but are actual living creatures in the world that (in theory) have some biological origin.

Hence, the (semi-joking) fan question has always been, “Where do all the Fallen come from, if they’re all male?” The Diablo III team seemed to be addressing this issue during development, as they profiled the Fallen in some nice lore features, and promised additional types of Fallen in the final game.

Abd al-Hazir #10 describes the known types of Fallen: Imps, Shaman, Hounds, Overseers, and Lunatics, and promises more types yet to be described.

I suspect the existence of at least two other types of fallen, but I will need to conduct further research before I reveal my theories as to the ultimate familial structure of these fiends.

This news set off much fan speculation, and the possibility of a

Fallen Queen was much bandied about. The wording of that quote, “familial structure” certainly seems to hint at some biological connection, does it not?

Speculation intensified after Blizzcon 2009, when the Diablo III Art Panel talked about the monsters in the game, including the Fallen, and showed this slide as a visual aide:

There was even a related quote during the panel Q&A:

Are there going to be some more Fallen? I’m inclined to say probably. We can’t really confirm anything yet.

The Fallen silhouette image clearly shows the five known types, plus that fat one in the middle, in a reclining position. Fallen Queen, Fallen Spawner, Fallen Broodmother, or something like that… right?

Adding to the issue is a piece of concept art that was flashed during a Blizzcon 2008 panel that definitely shows a Fallen Queen type creature: 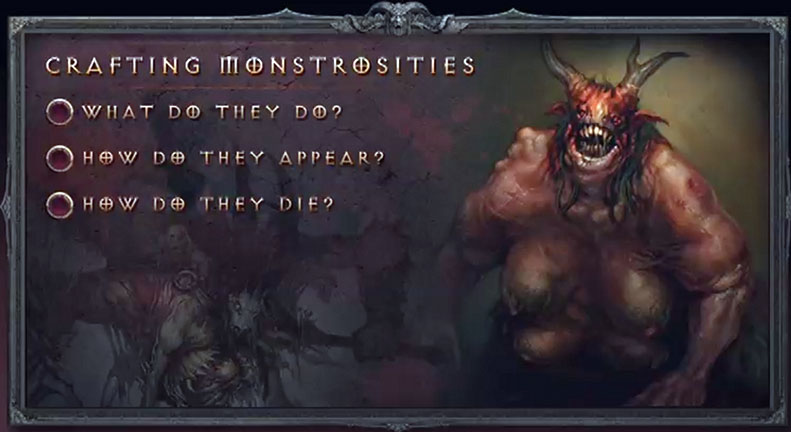 So where is she? And what’s that blobby silhouette in the panel image, if not a Fallen? Click through for a confusing but near-positive ID of the silhouette, and some speculation on the larger issue.

Obviously D3C didn’t give us the additional types of Fallen that Blizzard teased during development, but how about that blobby silhouette? I think they did give us that… it’s just not a Fallen. It’s the Goatman Occultist, most commonly encountered as the Blood Clan Sorcerers you see constantly throughout of the Act Three surface areas and during the battles across the bridge.

You see one in the picture to the right, and note the horns, huge, blobby fat belly, and stumpy little legs. (Which can somehow propel them along much faster than most characters can run.) They aren’t much on the direct attacks, but you often see their white-glowing, barbed wire-style armor added to other monsters. They are always seen upright (until you kill them) but I think they match the mysterious Fallen silhouette pretty exactly.

So what happened there? Did Blizzard initially plan those Goatman Occultists as a higher level Fallen Shaman, and change them to Goatmen during late development? The fact that Bliz pictured one of them lying down in the silhouette seems to be a pretty clear trolling, as Bliz knew we were all expecting a Fallen Queen, so they took a fat, horned monster and rotated it to appear to be lying down and gravid. Sneaky!

What about the Fallen Queen, though? That thing in the concept art is not seen in the game, and there are no other Fallens, as the lore promised us. Are the devs saving them for an expansion? If we get a Fallen Queen, what should she be like? If you remember the Maggot Queen from D2’s Act Two, she was just a huge slug thing that couldn’t move and didn’t even really attack, aside from producing more regular maggots.

Blizzard could go that route with the Fallen Queen, but I think she’d be more interesting as a two part encounter. The obvious influence is the Queen in Aliens, where she’s just an egg layer until attacked, at which point she tears loose from her worm body and becomes a vicious and highly-mobile melee attackers. The old Fallen Queen concept art certainly seems to show a vicious attacking beast.

Also, what other types of Fallen might we see? Abd al-Hazir promised at least two more types in the family. A queen mother type seems obvious, but what else? There aren’t any specialized Fallen ranged attackers, so maybe fallen mages or archers or spearmen? How about Fallen maggots, not yet hatched and all evil and slithering and embryonic? (Or… not.) Or how about a mega Fallen, a Fallen Patriarch? A towering beast the size of Siegebreaker, with a whole tree for a club and no inclination to run away squeaking under any circumstances?