The panel presentations at Blizzcon 2010 revealed a lot of great info, including all the new knowledge about the Demon Hunter, plus extensive coverage of the Battle Arenas, levels, quest, plot, monster development, NPCs, skill runes, and more. (Full coverage, including transcripts and screenshots:

Amongst those many cool tidbits were two things of particular interest to us, since they answered questions we’d previously pondered in article form

Short answers: 1) Yes and she’s the

Bastion’s Keep, scene of a large chunk of Act 3 action and plot.  For long answers and some relevant blue quotage, click through.

The “Sexy Character” question was posed in a non-guest article back in June of 2009, long before the Monk had been revealed. The article compared (with many links and illustrations) the hard-boiled, powerful female characters in Diablo III to the softer, flowing-robed, Playboy-bunny type female characters (usually mages or archers) in other RPGs (such as Everquest and WoW). The article argued that such a character type wouldn’t fit in the Diablo universe, while wondering if that was a problem for the game, or the marketing.

The article created a lot of discussion, with over 30 replies, most of them against the idea of a “sexy” character in Diablo III. A representative quote:

I?ve always referred to WoW as ?Disney Does Diablo? for this exact reason.  The characters just don?t look like they?re meant to be taken seriously.

The characters in the Diablo franchise have always been impressive for their raw power.  Simply put, they look the way I would want to look if I were fighting hordes of demons and undead.  Very muscular, very angry, and actually wearing body armor.—CCCenturion

Obviously, everyone has a different opinion about what “sexy” is, and it’s entirely possible you think one of the current characters (male or female) is the sexiest thing ever. The original article wasn’t debating that or advancing my own personal opinion; the point was if the game *should* have a stereotypically sexy female character, as WoW and most other RPGs do.

Now that it’s 18 months later and we’ve seen all of the female versions of the characters, we can say that no, there’s not a typical “sexy” female character in Diablo III, but that yes, the developers thought that sex appeal was important. Here’s a quote from

I’m going to walk you through the modeling, texturing and animation of the Demon Hunter. So right off the bat, we have this concept and we thought, this character, she hits the mark – yeah, there were like two guys that got that joke there. She was kind of a sexy character.

I know Christian didn’t get into that too much but at this point you’ve got the Monk, this holy monk, a creepy Witch Doctor, you have the Barbarian female if you’re into that sort of thing, awesome but we wanted someone that was physically attractive and for the ladies in the crowd, don’t worry about it, we are working on a male Demon Hunter now and are trying to make him as equally attractive.

So, the Demon Hunter was designed with an eye towards her sexiness. Obviously she’s not styled in the bikini-armor, pretty flowing blonde hair style, but more in the leather pants and bustier style. I approve, personally. I like her look and I don’t mind that the characters (DH included) have sex appeal, so long as it’s not overdone to become a distraction from their function. Most warriors throughout human history have spent time and effort on the look of their armor and weapons, as well as the function, and that’s fine to include in a fantasy RPG.

This issue was broached in an article posted in March 2010. In it we pointed out the obvious similarity of the burning structure in the background of the official Monk and Barbarian artwork by

Josh Tallman, and speculated that it had to be something of game/plot importance.

That wasn’t a real wild guess, given that it was featured so prominently in two of the main pieces of character art for the game, but the location and name of the tower was a mystery worthy of some debate. I didn’t advocate any particular location in the article, spending the words more on a general discussion of what was known about Diablo III’s plot and story and locations, but plenty of fans took a shot in the comments, with guesses ranging from New Tristram to Viz-Jun. The only one to get it right? An unregistered commenter!

This has got to be Bastion?s Keep. I mean, look at it! Looks like a big old keep, that would function well as a bastion of some sort? Got a big freakin? Barbarian throwing down poses in front of it? Near Arreat?—Guesty Guest

We now know it’s Bastion’s Keep since that level was discussed in great detail during the Crafting Sanctuary panel at Blizzcon 2010. The devs didn’t actually show the character art pics and say, “yes, that’s Bastion’s Keep” but from the description of the level it’s obviously the same thing. A Barbarian fortress, under siege by the armies of hell, which the player (that’s you) must join in the defense of, both within and without.

Here’s a quote from

Kevin Martens, discussing the level during the Crafting Sanctuary panel at Blizzcon 2010.

A perfect story for a Diablo game is a siege. Basically, everyone understands it instantly, whether you’re an attacker or a defender everyone knows how a siege works. More than that, it’s easy to design awesome action for… If you have the walls of a keep that’s being besieged by demons, by the biggest army of demons that has ever been seen in the land of Sanctuary, and you’re the only person that stands between them and total annihilation… You’re literally stopping a demon army. 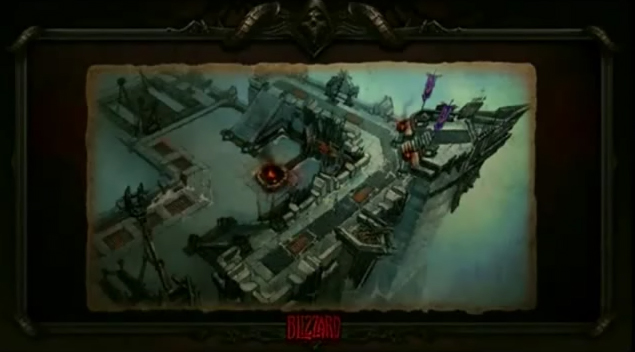 That panel showed a lot more detail about

Bastion’s Keep, including numerous concept arts and videos of the actual level at various stages in its modeling and development. We know it’s located in the Barbarian lands very near Mount Arreat Crater, and that it’s going to be under siege by a massive army of demons, arrived straight from the

Burning Hells.  (Apparently they come through where the Worldstone used to be.) We do not know for sure that Bastion’s Keep is in Act Three, but it seems a safe bet, given that Act One is near

Tristram and Act Two 2 is near

Will Act Four then take place in Hell, as the heroes beat back the demonic invasion and pursue the attackers back to their homeland?  The D3 devs haven’t given any hints about Act Four yet, other than to say that it’s similar in size to Act Four of D2; more of a finale than a full act in size. Setting it in Hell, just like Diablo 2 did, seems a fitting homage to wrap up the first installment of D3 with.