I uploaded a bunch more screens from the new patch, all of them showing off new features and changes. Most of them are in my two part mega patch report from yesterday, which you should look over if you missed it — literally every new feature and tweak in the beta is covered, plus there’s lots of details on Wizard skill changes, difficulty and experience curve modifications, and more.

I mention those now because there were numerous screenshots showing new beta stuff in those, plus numerous additional shots that didn’t fit. And that’s what this post is doing; sharing all the new visuals, with useful info about all of the shots and their contents.

The Nephalem Altar is the new shrine-like obelisk in town that players must click in order to respec skills. They’re not just found in town though, at least early in the game. Until you get your Stone of Recall, there’s an Nephalem Altar right at the start of each new area, the last of which is on the first level of the Cathedral. As you see in the shot on the right.

The new character selection and log in screens are best-viewed in a video, but you can enjoy the higher quality image in a screenshot as well, on the left. There’s nothing new about the in-game interfaces, though they’ve received tweaks. Lots of new tooltips (shown later in this article), but one nice addition to the skill interface is that your currently-selected skills now have an ornate silver border around them. Previously they were just highlighted in a brighter color than the other skills.

Click through for many more, including all the new tooltip pop ups, the skeleton-free Den of the Fallen, the buggy visuals of new monster modifier Mortar, Leoric’s cinematic changes, the new (lame) version of Arcane Enchanted boss mods, and other cool stuff.

The new boss mod Mortar is interesting; it basically makes the boss (or champion) constantly emit small firebombs in every direction. At Blizzcon the devs said these were meant to inconvenience ranged attackers, since many of the other boss mods were much tougher for melee characters. Things like Molten and Frozen and Electrified, that send out elemental damage from the spot of the boss. I only faced two bosses with Mortar, and they were both fast-moving melee monsters, so in both those instances the mod wasn’t any easier for melee than ranged. In theory though, a melee character would have many of the mortars fly over their head, while a ranged character could not so easily stand out of range.

The amusing thing about Mortar at this point is the buggy nature of the graphics, with big pink squares appearing for a frame or two on the ground, rather than proper explosions. This is in the known issues on the patch readme.txt, and will obviously be fixed before the final game.

The other big boss modifier change below shows the new form of Arcane Enchanted bosses, which has met with fairly-universal dislike from beta testers and others in the Diablo community. Previously this mod caused lots of single-headed Hydras to pop up and unleash rapid-fire Arcane balls. These hurt, and many an unwary player died very quickly to this mod. It wasn’t really that dangerous; you just had to pay attention and relocate quickly, several times during each battle with such a boss. But that was too big of a “difficulty spike” for so early in the game, so now Arcane Enchanted bosses spawn these weird straight lines of arcane energy.

They rotate like second hands, with the thin end moving around in a large, slow circle, and of course doing damage if they hit you. The damage per second is much lower than the previous Hydra attacks, and these are much slower and easier to dodge. Difficulty aside though, they’re just lame. There is a loud electrical noise as they turn, and that, along with their smooth, mechanical nature makes them feel like part of a bank’s security system in a movie, rather than a magical effect in a fantasy video game. Why the developers didn’t just keep the Arcane dragons, but slow down their rate of fire/damage, I can’t say.

At any rate, this is easily the least popular change in the patch, from my informal beta player survey.

The wide-brimmed, pointy Wizard hat was in the beta before, but it was a fairly high level item and had to find. The ilvl has been lowered, judging by how many of these I found even very early on, they’re only for Wizards, and tend to come with useful spell-casting type stats. You can see a couple of very low level versions in the comparison image on the left. And yes, they pretty much make you look like Gandalf, especially if you’re carrying a big ass two-handed zweihander sword in order to test the weapon damage = spell damage changes.

The Den of the Fallen is one of the cooler mini-dungeons in the beta… or at least it was, with an original tile set (lots of narrow tunnels with huge tree roots poking through the walls), and tons of Fallen skeletons. It’s something of a mysterious level, with all the dead Fallen appearing before you’ve actually seen any live ones. 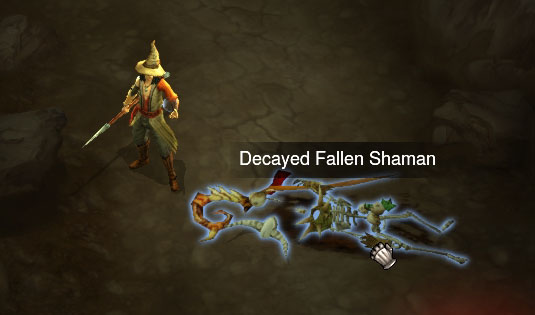 Prior to this patch I figured it was a level from later in the game that they’d moved into the Beta for variety, and that we’ll probably have seen lots of live Fallen before we get to it. (It didn’t make the cut into my article about how the beta is much different than the final game, but it was definitely contributing evidence.)

I’m less certain of that now, since the level in this version of the beta is just an interesting cave with a few rotting Fallen Shaman corpses here and there. There are still some skeletons, but so few that they don’t give the creepy sense that there was some sort of Fallen massacre, and the level didn’t seem wildly out of place in the beta anymore. Though it is still weird to get Fallen Shamen, rotting corpses or not, before you see any live ones.

(Another theory is that this level is an homage to the Den of Evil, the first quest dungeon in Diablo II, which was also a cave with a lot of live Fallen. Could be, could be… though there are many other monsters than Fallen in the D2 dungeon, and the architecture is much different. The D3 Den is a series of organic tunnels, like a rabbit warren, rather than D2’s much larger and more open series of caverns.)

Leoric’s ghostly death cinematic is changed slightly, in that all you see at first is his glowing sword. I described this in my big patch report, and the caption in the image explains things as well, so just click it for the details.

Chests are less common now, but more noticeable, with a silver glow around them. This doesn’t mean they drop big loot; in fact I think they drop less than they did earlier in the beta. But they’re certainly more visible.

Transcendent Chests as well, which have a golden glow (unchanged in this patch) and drop many more items. They’re very rare though, only appearing in a few preset locations. Sometimes they’re always there; such as one on the second level of the Den of the Fallen, with others that appear some small percent of the time in other non-random locations. The only one I got in my play time was in the Den of the Fallen, and its drop was underwhelming.

There are various tweaks to the mini-map, such clearer marks for dungeon exits/entrances, bigger dots for quest NPCs, an icon for the Nephalem Altar, and something you see in the shot below; a big glowing monster icon for the Skeleton King.

No other monster had such a map demarcation, so I guess it’s only for certain big time quest bosses. I don’t see why Leoric needs this, since you’re not going to lose him in his own small throne room, and even if he’s off the visible screen it’s hard to pinpoint him from the big icon on the tiny map anyway. Perhaps other quest bosses/act bosses more around more and you need the map help? Or perhaps it’s just a cool thing some developer thought to add, to put a bit more special feeling into big boss battles.

Finally, there are a lot of new tooltips that explain the basic game features. Super basic stuff that only people who are brand new to video games would need. But as the developers keep telling us, they want Diablo to be very accessible to such people.. This stuff only pops up in the very early going, for the most part, and you can turn them off in the options, so I can’t see anyone complaining too much.

A few examples: unlocked skill slot, picked up an item, it’s the Nephalem Altar, you’ve taken damage, quest monster spotted, even one telling you that you are in town. I’ve stuck a few thumbs below; see the Beta Screenshots gallery for all nine of them.