Last week Bashiok said the male version of the Demon Hunter would be revealed soon, perhaps next week. Since it’s Monday, that means we’re now living in next week, AKA this week. Which means the male Demon Hunter might be revealed at any minute! So, what’s he going to look like, then? That’s the question pondered in this installment of our image examination column, Upon Closer Inspection.

What’s there to look at, though? The male DH hasn’t been revealed yet, and all we have to go on is the outline of the character shown in the Blizzcon Arena demo character selection screen. Actually, that’s not all. As Kunzaito asked in a comment to last week’s news; what did the preview silhouettes look like for the last two class gender models to be revealed; the female Monk and the male Wizard? I didn’t remember, but thought they’d been plain, caution sign type character outlines. I was wrong.

Click through to see those images and more speculation about the male DH’s look, fueled by various blue quotes about the initial design concepts of the character. Plus an update with an image from the Gameplay Panel at Blizzcon that might provide a very good preview of the male DH’s look.

Here’s how the male Wizard looked in the Blizzcon 2008 character selection screen. You can see that it’s the final game artwork, just rendered transparent since he wasn’t selectable at that point. This animation looks final, but likely his other animations weren’t all finished. And/or the developers wanted the full focus to be on the female Wizard, for the debut of the character. 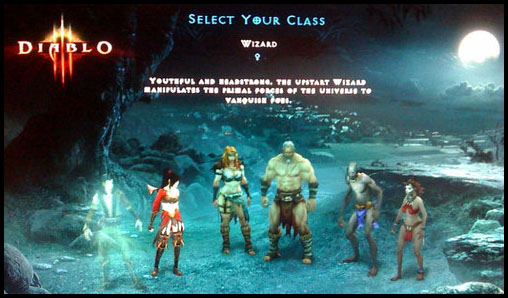 Here’s how the female Monk looked at Blizzcon 2009. Is that even her? I guess so; the staff across her back is Monk-like, but other than that, she looks more like someone from the cover of a romance novel than a sturdy melee brawler. Willow slender, tiny arms and legs, a luxurious tangle of windswept hair… I think fans might have had problems accepting that figure.

Update: Blast Kid in comments reminds us that the female Monk got a “pixie cut” during her development. 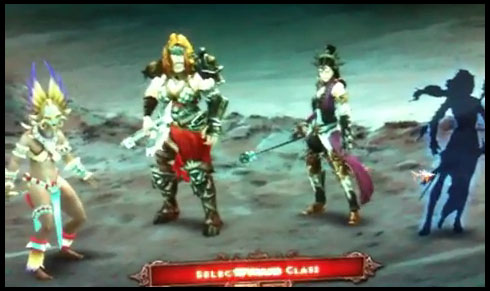 Here’s the male Demon Hunter, as seen in the character selection screen from Blizzcon 2010. (This is the Arena selection screen, which is why the male Monk is also blacked out.) Lots of fans are assuming that the revealed character will fit this outline perfectly, but given how hugely different the female Monk was from her outline at the previous year’s Blizzcon… that might be an erroneous assumption.

Thanks to Kunzaito for tracking down photos and movies showing the male Wizard and female Monk outlines; his effort made this post possible.

Adding this in after a prompt from Blast Kid about the female Monk’s “pixie cut.” It’s a Bashiok quote from September 2009.

Those could potentially sound trivial until you realize that any one of those things would be weeks to months of work. In some cases the work never stops on ensuring things adapt to fit all classes, and then separately each gender.

To answer the OP, the only big question I think we ever had on creating genders for all classes was how to best handle the female monk. And that’s been solved.

Bashiok: Pixie haircuts are hot.
That is all.

We have another source of info for this mystery. The words of the designers themselves, as they talked about the design inspiration for the Demon Hunter. They discussed the fifth class in detail during the Gameplay Panel at Blizzcon 2010; click to the wiki page to read the full transcript, view dozens of images, or just watch video of the whole thing. During that panel they discussed the evolution of the Archer class, how it became a Demon Hunter, and how the earlier versions of the character looked, with the huge demonic arm and other more off the wall designs. They don’t really get into their design influences though, as they did during subsequent interviews.

With the demon hunter we found inspiration in characters like Van Helsing, Boba Fett, and even MacGyver. —Jay Wilson
…we wanted someone that was physically attractive and for the ladies in the crowd, don’t worry about it, we are working on a male Demon Hunter now and are trying to make him as equally attractive. —Paul Warzecha
We wanted [the class] to feel more gothic and darker, so we went with the Van Helsing, Batman vibe. It was really important for us to play up on the darkness of this character.—Jason Bender

They’re talking about “inspiration” for both the look and the vibe/biography/style of the character, but it’s interesting that all of their design influences are male characters, while we were shown the female Demon Hunter for the class debut.  Also note that all of the Archer concepts, plus the demon-arm Demon Hunter concept… are male.

I bet they did their initial design work on the male Demon Hunter, before switching over to the female so they could get her done first in the interest of gender variety. (The Barbarian, Witch Doctor, and Monk debuted male, with only the Wizard previously female at debut.

RabidWolf created a version that perfectly fits the silhouette in the forum thread. Kind of a Prince of Persia vibe, physically. Lithe and light and quick, which is a good match for the female version of the class. Influenced by movement skills like

My initial thought was of a Mad Max type character. A tough, battered, hard-edged survivor, using scavenged gear and repurposed items to kick ass. That seemed to fit with the bounty hunter design, and the lone survivor of a demon massacre, character bio. But after taking a closer look at the female bounty hunter, I changed my mind. Demon Hunters are clearly doing more than learning to fight and make weapons from demon body parts in their desert camps. Check out the customized boots, gloves, shoulder pads, belt, girdle, bustier, and all the rest the female DH is wearing; there’s no way the male will be a Mad Max style survivor, with his better half such a leather-clad fashion show.

The better bet might be a more obvious choice. The devs early design work was (apparently) on the male version of the character, they’ve repeatedly cited Van Helsing as a design inspiration, and we even suggested van Helsing as a character type back in 2009, long before the character was revealed. Why fight it? We’re going to get a non-bearded version of of Hugh Jackman.

Which do you favor? Or do you expect the male Demon Hunter to be something else entirely?

Update: Kreed720 in comments points us to the image below, from the Blizzcon 2010 Gameplay Panel. It shows an early concept version of the Demon Hunter, and seems a decent bet for the male’s look. 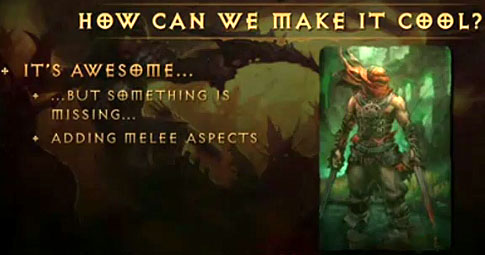 Note that this pic was shown during the portion of the panel when they were talking about rejected DH looks, and how for a time their designs had drifted too far away from the core char design concept of a ranged attacker. This guy was used as evidence of how they got too far into an assassin-style melee fighter, so clearly the final male DH won’t look *just* like this, since he doesn’t look like a ranged attacker. Though he might be fairly similar…