I’ll link to the tunes first, for those of you who want Matt’s music but not more TL2 stuff.

All of the media attendees were part of Runic Games first community podcast. This chat took place after we’d played a couple of hours of TL2, and we attendees asked basically every question on our lists, with several developers present to field them. My contributions included asking Travis, “Why do you hate noobs?” as well as putting him on the spot to list TL2’s selling points over D3… if someone who didn’t care about the price or modding. I’m pretty sure I threw a Bobby Kotick joke in later, but my memories are a bit of a blur at this point.

Click through for more links to the office tour video, TL2’s “German” stat tracking illustrated, several detailed gameplay reports, and more commentary on the “D3 is much slower-paced than TL2” issue I brought up in my initial report, which generated quite a fair amount of controversy and disagreement from people who have not played either game.

One of the things these reports stress is the main thing I noticed about TL2; just how much faster and more active the combat is than D3. A quote from Hawkn’s part two:

I’m going to start with the Blizzard vs. Runic debate that everyone seems so set on talking about. I’ve played both Diablo 3, and now, Torchlight 2. I’m well aware that the first part of a game does not speak for the game as a whole, or how the endgame will play. I’m sure Diablo 3 will have plenty of people playing it, and I’m sure it will be difficult – what any ARPG fan wants. Itemization will be fine, I’m sure. However, the main issue I’ve had with Diablo 3 so far, is that it feels… slow. Combat somehow feels like it’s artificially slowed down, and it take a long time to find any action. Most of the “difficult” combat consists of enemies that simply have higher HP, and just take longer to kill.

That was more or less my reaction, especially after I got home from the event and played a new Monk through the whole D3 beta. People have argued against this observation by pointing out that the D3 Beta is easy on purpose. Yes, it is, but remember, I played at least a dozen hours of the PvM demos at Blizzcon 2008, 2009, and 2010, none of which were the beta, and they weren’t any faster-paced or difficult than anything in the beta now.

I’ve written many thousands of words about my D3 play experiences, and I’ve enjoyed the vast majority of play time I’ve had on D3, but the only times I’ve felt actually challenged or adrenaline rushed was during my time playing in the Arena at Blizzcon. Wolfpaq and The Eliminator echoed that reaction when they talked about their Blizzcon 2011 experiences on a recent TDP. Both of them played a bit of PvM, but they had vastly more fun playing the PvP. 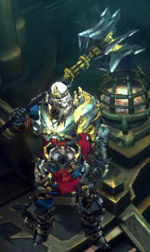 Blizzard keeps assuring us that the early slow/easy pace is just about “accessibility” and being noob-friendly, and that there are hard things in D3, and that it gets faster and more chaotic later in the game and on higher difficulties. I hope they’re right, because nothing I’ve seen in the game yet can compare to the crazy action and fast clicking I saw from even early level bosses in Torchlight 2. In my first TL2 MP game we did get to one big boss, when we were around Clvl 10; which is about when you face Leoric in the D3 beta. And honestly, I can hardly compare the two.

The TL2 boss (not an act boss, but a quest one, roughly equivalent to Leoric) was maybe 4x the size of Leoric; a huge demonic thing stalking around, making the screen shake, casting numerous hellfire type spells, and there were minions constantly spawning around the edges of the battle area, forcing all the players in the game to constantly vary our attacks between the boss and the minions. We had to run repeatedly, kiting out the enemies, finding defensible space, slowing our combat to let some mana regenerate, drinking potions, etc. It was a total blast and was so much more fun and challenging than anything I’ve (yet) seen in Diablo III.

I certainly join you guys in hoping that we’ll see content like that in Diablo III, but I wouldn’t be reporting honestly if I didn’t point out that we haven’t yet, and that in my opinion, the game, even the early game, suffers for it.