We fans enjoy contemplating variants and odd builds all the time, including naked ones, but we haven’t actually seen much in the way of “how to” or better yet, “how I did” descriptions thus far from the beta testers. 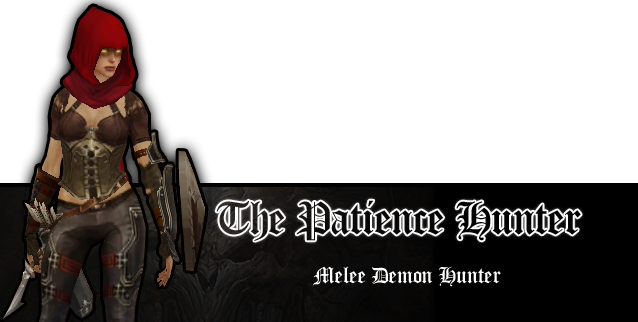 Risingred has made a solid effort to change that with a long and very detailed report on playing a melee Demon Hunter in the Diablo 3 Beta. He lays down the ground rules, covers tactics and strategy, discusses all of the available skills, and even includes a video with some highlights from the game play. Here’s a quote; click to the forum thread to view the whole presentation.

The Demon Hunter cannot equip melee two-handers, or obviously class-specific items from other classes. So you’re stuck with two options, really: A 1-handed melee weapon and a shield, or a 1h and a quiver. Why would you want a quiver?! We’ll get to that, but I don’t think a quiver would be too viable.

Attack speed makes a very large difference. In the video, you can see that I switched from a dagger to a broad axe. This was a huge hit in attack speed, but as far as top-end damage goes with impale, my damage did go up. However, at this level, you don’t have a large amount of modifiers available to you. There’s small amounts of life leech (around 1.2%), but no on-hit leech, no on-kill leech.

Leeching, and whichever method you have, is going to make a large difference in your weapon selection. You’re going to want to favor your fast-attacking weapons over your slow, hard-hitting weapons, to take advantage of the leech. Unless you’re building the character to work on % leech, then it is the opposite, but I can see these two (fast 1h vs slow) playing extremely differently.

I’m ambivalent over the frost elemental weapon effect. In the video you’ll see that I constantly use Caltrops, which made the frost slow kind of irrelevant. With the removal of enchantments, I’m thinking it wouldn’t be worth it to go out of your way to find a weapon with cold damage on it. I tend towards holy damage simply because the crits have a really cool sound. >.>

Worth noting that this is the only build in my entire time playing Diablo III where I felt that the increased amount of health from health globes was a necessity. This is from low-level item mods. The gathering mod, I didn’t need so much, and in fact I avoided it so I wouldn’t accidentally use a globe at the wrong time by simply moving too closely.

The full article is here, in our Diablo 3 general discussion forum.