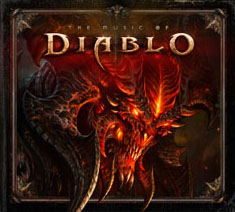 A new piece of Blizzard merchandise was unveiled at BlizzCon 2011, and has since been added to the online Blizzard store. It’s a CD called

The Music of Diablo, and it collects previously-unreleased music from D1, D2, D2X, and even contains a couple of previews pieces from Diablo III.

Most of the music on the disk was composed and/or performed by Matt Uelmen, and he came up in the news recently, when a fan lamented his absence from Diablo III’s music. And got a surprising reply from a Blizzard CM.

D3 could have been saved if Matt Uelmen was still around to compose music for it. But alas.
We recorded approximately 90 minutes of Matt playing 12-string guitars for the Diablo III soundtrack.

Since Matt left Blizzard for Runic Games in 2007, this might seem puzzling… until you remember that he worked at Blizzard North until the studio closed in 2005 (he then continued on with Bliz Irvine for a couple of years, contributing much to the WoW Burning Crusade xpack). None of the games Blizzard North worked on after D2X ever saw the light of day, but clearly some of Matt’s recordings survived. The guitar mentioned above, and we know he did some full symphonic pieces in Bratislavia in 2005.

A few of his unheard Diablo compositions are now showing up; that’s one in the you tube to the right, a symphonic piece entitled “Lord.” Check out this forum thread for more info about and discussion of Matt’s work on Diablo. There are also several sample recordings, from the Diablo 3 Beta as well as the The Music of Diablo CD. (Every track of which is on YouTube, if you don’t mind the mediocre sound quality of .flv files.)

Russel Brower in a short interview from the BlizzCon 2011 PPV broadcast, in which he talks about the Music of Diablo CD.

“Hydra,” concept music for Diablo III by Matt Uelmen. (Diablo III was known as “Project Hydra” during the years of development before the game was announced.)