artisan is seeing some final concepts and will move into early model and texture work soon.—Diablo 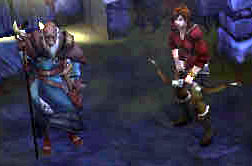 Sounds like that char won’t be in the Blizzcon build, then.  That’ll be consistent, at least. There weren’t any NPC merchants in the 2008 or 2009 demos either.

In fact, the only NPC with a non-generic speaking part we’ve seen so far was

New Tristram in 2008. He’s right in the middle of the recent Caravan screens, incidentally, along with