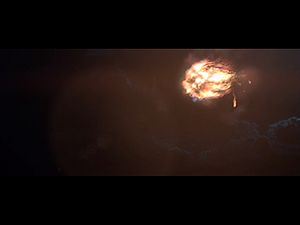 Meteor has been something we’ve all been wondering about for a long time. It might, or might not, even have crossed over to our world just a few weeks ago! Regardless, we’ve tried to gather as much information as possible about this flying ball of fire, either to prepare Earth for a Demonic invasion, or just get a sneak peek at Diablo III’s story line.

Even since Diablo III was unveiled back during

WWI 2008, fans (at least those interested in the story) have discussed what the meteor seen in the introduction cinematic could be. One of the primary ideas have been that it could be a banished (or fleeing) entity from the

Izual have been the two primary points of interest for that theory. Knowing Blizzard’s sense for plot twists, nothing is really beyond speculation. Continue reading about the Meteor after the break.

Twenty years after the

Worldstone was destroyed by Tyrael, nothing has really happened in the world. The expected demonic invasion never came and

Deckard Cain has spent all this time trying to figure out what to expect next. He felt he failed humanity the first time (

Diablo II), and is determined to be prepared before an invasion, which might eradicate humanity completely.

Since Diablo III is still in pre-alpha development, we can’t really trust any source of information completely yet. As such we don’t actually know if Cain was in the cathedral during the meteor impact or not. This makes it even harder to figure out the Meteor.

Leah runs IN to the cathedral as it’s about to be hit by a meteor in the cinematic, and most of the concept art suggests she’s running in to try and save the frail Cain, so these two facts are pretty likely to remain true. How Cain survived such an impact is hard to say, however.

The meteor leaves a massive hole in the cathedral floor, cutting right down into the dungeons and catacombs we visited in the original Diablo game. While they might have received a slight art update (and some people dislike that colour), this is the very same labyrinth where

Diablo has been killed once before.

If you take a look at the concept art and cinematic frames to analyse it, the most interesting (and perhaps also most likely) source of the meteor suggest at least some involvement by

In some of the art seen here, Tyrael (or some other entity) is seen “doing something weird”. This could be voluntary or not, but seeing these frames very much hints at whoever it is really becomes the meteor, and it does look painful. Voluntary or not he/she/it is launched down from the High Heavens and crash lands on the cathedral. We know this awoke King

Leoric, but it might just have been an unintended effect. For one thing, the Dark Cultists must have been down there for a long time to fill it with so many monsters, and the meteor could simply be someone’s way to try and uncover their plots.

Many theories envelop the Meteor and fortunately for you, we have brought together every last bit of information available about the flaming piece of something that crashes down into the cathedral so you can do your own assessment. What EXACTLY is the meteor anyway?

Meteor article in case you missed any information about it in the news. Should you find additional material related to the Meteor, make sure to add it as well!

With all available information on the table, what do YOU think the meteor is?

Also, here are some more threads made between 2008 and today which speculates about the same topic from the Diablo 3 Lore and Story Forum: