Flux is joined by Neinball and Exile as they answer listener questions about the Diablo 3 Beta. When will it start (soon!), how long will it last (less time than you expect), how do you get into it, and much more. 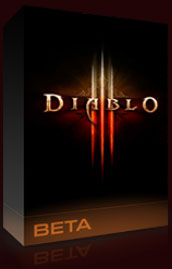 The twenty-fifth episode of The Diablo Podcast is now online for your listening pleasure. In this show Flux, Neinball, and Exile discuss the imminent start of the

Diablo 3 Beta, and answer numerous listener questions about the beta test. What will be in the beta, when will it start, how do you get into it, how long will it run, what does Blizzard look for from beta testers, how did Blizzard handle other recent beta tests, and much more.

I was surprised by how short both Exile and Neinball thought the Diablo 3 beta might be. Listen to the show for their opinions and reasoning, but after thinking it over, they’ve got a point. I shall explain:

The Diablo 3 Beta test will consist of just Act One and probably the Arena. We know that Blizzard has Act One nicely-polished, plus as they’ve repeatedly told us, Normal difficulty is balanced to be absurdly easy rather gradual in the difficulty ramp up. So testers won’t be running into brick walls of excessive difficulty, or many bugs, and there won’t be high end/late game character/skill/item/runestone/etc balancing going on.

What does that leave that needs testing? Technical support stuff, of course, given all the different computer systems that players will log on with. But in terms of game stuff? Just Diablo 3 over Battle.net, basically. And it’s not like Battle.net is a new system at this point. It’s been pretty well broken in by a year of SC2. So once they can get good function from the game creation controls, chat channels, LFG controls, trading system, Arena matchmaking, etc… that’s pretty much all they need to test before the release.

Compare it to SC2; that game’s beta started in mid-February, and the game was released in late July; 5.5 months later. SC2 had a shorter development time than D3 has had, and B.net 2.0 debuted with SC2, and the SC2 beta was the entire MP game, with endless balancing and testing and unit-tweaking, etc. D3 is hitting a mature B.net, and will require a tiny fraction as much balancing and play-tweaking as SC2 did. Furthermore, the SC2 team wasn’t crunching frantically to make a year-end deadline. All that considered, I don’t think the D3 beta test will run anywhere near as long as SC2’s did.

The Diablo 3 Podcast Episode Guide in DiabloWiki.net provides links to every show, plus quick summaries.