Flux, Neinball, and The Eliminator debate the function and method of trading in Diablo III. What lessons can be imported from WoW’s Auction House? What are the major differences in Diablo III that will force alterations to the WoW style of Auction House? Why was trading such an ordeal in D2?

The Diablo 3 Podcast Episode Guide in DiabloWiki.net provfides links to every show, plus quick summaries. 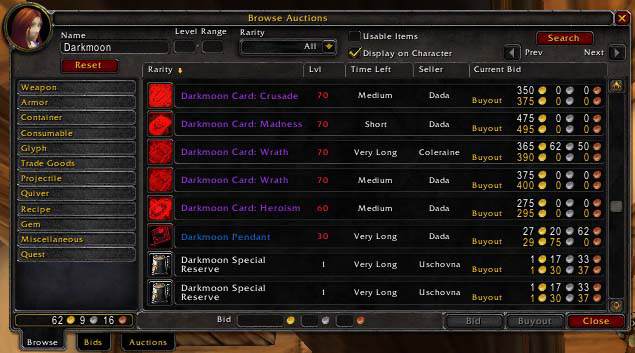 The fifteenth episode of The Diablo Podcast is now online for your listening pleasure. In this episode Flux, The Eliminator, and Neinball discuss trading in RPGs. The first third of the show features much general information about how the Auction House works in World of Warcraft, since it’s obvious that the (hypothetical) D3 version of the AH will be an evolutionary version of the trading system from Blizzard’s other RPG.

What are the pros and cons of the WoW AH? What can be improved upon it? And most importantly, what changes must be made in order for it to work in Diablo III?

Rare items are obviously a challenge, since they create essentially infinite potential item listings, as compared to the finite number of pre-made items of WoW. There’s no item binding in D3, hence high level gear will be much traded. Another major issue is the size of the trading population. Trading is by server for WoW, and there are something like 120 WoW servers just to cover the US. D2, on the other hand, had 2 servers for the US. Would 60x the item listings/traders/trades overwhelm a WoW style AH? Can we thus expect the D3 playing population to be divided up into multiple realms, or will the devs just create multiple separate but parallel AHs per D3 realm?

Other topics of conversation include gold sellers and RMT, middlemen and price gouging, the viability of gold as a currency, inflation over time, and much more. We even stayed fairly tightly on topic, bringing this episode in at just over 30 minutes. Never fear though; we’ve got two more shows coming up later this week, so you’ll have plenty of Diablo chat to kill time with.