Another week, another 25k “likes” for the Diablo facebook page, another piece of artwork. This time it’s a 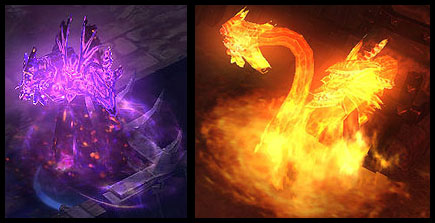 This look of the skill is fairly faithful to the fiery version of it we saw in Diablo II, which was itself an elemental upgrade over the flesh and bone dragons that appeared as Guardian in Diablo I. The Diablo III version has different graphics for all of the heads, at least one of which seems to have gotten something of a frilled lizard upgrade. They’ve all got more details to them, with different head shapes and armor plating. Not that beings of pure elemental energy, that are never targeted anyway, need armor. But it looks cool and gives more visual flair to the graphics.

This concept art is nice for another reason; it’s holding still to give us a clear look at it! I saw hundreds of Hydras cast during Battle

Arena games at Blizzcon last year, yet never felt like I got that good a look at the dragons. The Arena ones had an Arcane energy form, thanks to an Alabaster

runestone in the skill, and their purple on dark purple coloration, with a lilac glow, was very pretty, but very hard to see clearly. Even in the still shots, the slightly transparent entities, formed from harsh planes and angles, as delineated by the almost monochromatic palate, are hard to discern.

I think that’s a feature, not a bug. The dragons of the skill have a shimmering, ethereal presence that seems ever-changing and insubstantial, like the flickering flames of a fire. I’m eager to get a good, clear look at the other Skittles-hued runestone versions, after the teases shown during last year’s Blizzcon panel.

We’ve also been gifted with a new screenshot. It shows a male

Activated Vessels with an

Arcane Orb. The red/orange swirls are part of one of the monster’s death animation. The origin of the Monk-like glyph on the ground is less clear. Dungeon decoration? Indicative of a

Here’s a closeup of the central action. Click the image to see the full-sized shot.