The Diablo Facebook “likes” tally clicked past 575k late Monday evening, and Bashiok (or one of his anonymous comrades) leapt into action, uploading a new concept art and screenshot in the wee hours.

Fallen Hounds. Note the huge green cloud of poison left behind him, though. What’s that from? A trapped chest? Some Monk skill we don’t know about yet? As for the monsters, Hounds often spawn with Shaman, especially when there are several shaman, Champions or not, in a set location. The hounds aren’t the most ferocious enemies, but they’re sturdy melee attackers, and unlike Fallen Imps, they don’t get spooked and run away when one of their fellows proceeds them through the gateway to eternity. 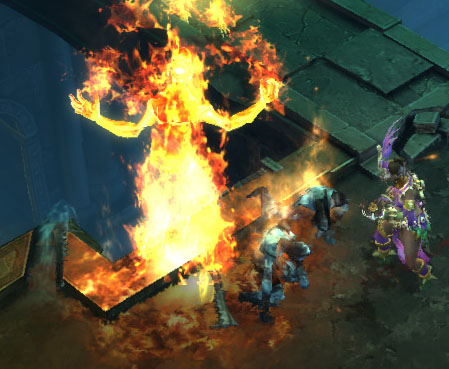 Speaking of eternal gateways (not really, but I liked the sound of that segue), the other piece of art shows concept art for the explosion part Witch Doctor’s

Firebomb skill. It’s a fairly clever skill graphic, when you think of it. Instead of just a blast of generic flame, the explosion briefly forms the shape of a burning man. We don’t know many of the

runestone effects for Firebomb, but looking at this image it’s easy to imagine one effect turning this attack spell into a minion summoning skill. The right rune effect would unleash the fire elemental, which could bash and burn the monsters for an appropriate duration.

It’s also informative to compare this skill’s concept art to the Zombie Wall concept we saw last time. That one showed very WD-like figures in the Zombie Wall concept, whereas the game graphic has fairly generic humanoid figures. Conversely, Firebomb’s concept art shows a generic flaming figure, while the actual game animation is a more detailed figure; perhaps meant to be a Witch Doctor? Funny how those two skills went in opposite directions, from concept to execution.