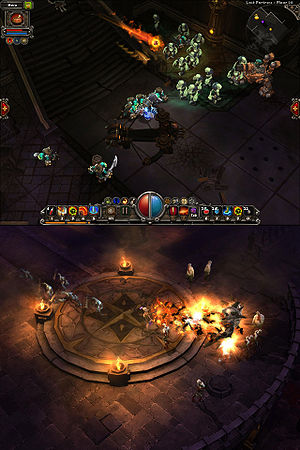 After the slow news pace of September and October, November got back up to speed, with August’s Blizzcon just a distant memory. Bashiok was a busy boy in the forums, the @Diablo twitter feed was active, Torchlight launched and created a ton of RPG news, and there were a few Blizzard interviews as well. We got official confirmation that Diablo 3 would not be released in 2010, and found out that

skill trees (as we knew them) were gone, and we were briefly excited by the rumor that Blizzcon 2010 would be in Vegas. One thing the month didn’t have was any new eye candy. In act, we’ve not seen a new screenshot or piece of concept art since Blizzcon, in early August. That’s almost five months ago, at the time this summary is being posted.

Despite what was said in the intro, November did start off with some new images… unfortunately they were only new Torchlight images, made interesting by being compared, side-by-side, with previously-released Diablo 3 images. The concept was cool; a way to compare the look of the games directly, but it soon became clear that the selected images had been chosen entirely or their similarity in color scheme, and weren’t making any larger argument.

While Torchlight was perpetually compared to Diablo 2, due to the style, look, and the fact that D2 developers worked on it, there weren’t any actual homages to Diablo 2 in the game. That was not the case with Borderlands, which had numerous Diablo item and monster names worked into the game, to honor the game that so inspired its creators.

Continuing the busy early month, Jay Wilson was interviewed on November 2nd. Unfortunately, the interview was conducted by USA Today’s gaming section, and was as superficial and remedial as you’d expect from that sort of mass media outlet.

The closest thing we got to an official Blizzard statement on

Torchlight came on the 4th, when Bashiok reminded us that Blizzard employees are big gaming fans so of course they’ve been playing it, and that they think it’s cool.

October 9th brought some news that would have been devastating if we hadn’t already known about it. Nope, Diablo 3 is not part of Blizzard’s 2010 pipeline.  A later update told us it would be released “in the next few years.” Literally? Unknown.

The 12th brought an interesting conversation on modding. Torchlight hugely encourages it, fans of Diablo 2 have always done it, yet Blizzard’s official stance on Diablo 3 is that they’re not going to support it. Most fans find this fairly dumb.

The 13th brought a fun info leak that quickly turned into a debunked hoax. Blizzcon 2010 would be in Vegas! Except not!

Mid-November brought a rash of posts about various new v1.13 delays and feature issues. The promised larger stash was delaying things, and threatening all of Battle.net, until it was removed entirely. Sorrow! (The patch, sans larger stash, went live on December 10th.

November 17th brought a nice discussion about two-handed weapons, and what might be done to make them more viable. Bashiok’s post showed that the dev team is up to speed on the basic balancing issues, but that no final decisions have yet been made.

The biggest news of the month started to leak out on the 21st, when word came that

skill trees were gone. Not entirely gone in concept, just that the known organizing and UI system of skills was going to be radically changed. More posts were made on this issue, but no concrete details have yet been spilled.

On the 23rd Rob Pardo was interviewed, mostly about WoW, as always, but he did admit that Blizzard tends to announce their games too early.

The last news of the month came on the 24th, and concerned Act 3 testing and non-linear game construction. There were no more posts worth noting after that, since Bashiok and everyone else headed out or a long Thanksgiving holiday.