July didn’t offer any new previews or interviews, but back in those pre-twitter/FaceBook days

Bashiok kept very busy in the forums, and he shared a lot of info in July. Most of his posts do not contain “new” info, from the perspective of hardcore fans, but he usually explains or elaborates on issues with the benefit of his knowledge of the whole game; not just the little bits fans have so far been permitted to see.

Since there were so many good news/content updates in July, this month’s summary runs long. The first few entries can be seen below; click through to relive the whole month and the controversies and discoveries that marked it.

The month started off with big Blizzard news, when word broke of their recent trademarking of “Cataclysm.” The leading suspicions were that it was for an upcoming World of Warcraft expansion, though some suspected it could be for a new property, or even a Diablo 3 expansion. As we found out a few months later, it was indeed the next WoW expansion, which was officially revealed at Blizzcon 2009.

The Diablo 3 news kicked up the next day, when Bashiok confirmed that there are no loading screens at all in Diablo 3. “IT’S MAGIC!” he said. Celebrations ensued until someone points out that D2, that cutting-edge piece of software designed 11 years ago, didn’t have any loading screens either. At least not once they did some optimizing during patches and computers got more RAMy.

A few days later, Bashiok leapt into a thread full of complaints about Diablo 3’s green/blue dungeon lighting by changing the subject. Yes, the first Tristram Cathedral test dungeon (seen in the WWI Paris gameplay movie) has a lot of colored lighting (enough to spur the initial

art controversy), but that’s not the only dungeon in the game, and the others will offer a lot more variety. Looking back from the end of the year, the desert levels and dungeons revealed in the Blizzcon 2009 build backed up his point, since it was very different in color and style. Whether all the other dungeons in the game are as good remains to be seen.

The 7th brought more interesting Bashiok forum posts, with a juicy one on the

Wizard‘s damage types. Some fans had noticed that she had few Fire damage spells, which seemed odd, since the D2 Sorceress had a whole tree of Fire. Bashiok’s reply got lore-ish, as he talked about the headstrong young Wizard character and how she’d consider fire spells to be too easy/beneath her. He also pointed out that the Witch Doctor has a lot of fire spells, which seems a more useful interpretation, in terms of game play. Since the D3 Wizard doesn’t have spells sorted by damage-type, it’s better for balance if some types of damage aren’t readily available to the character. The next day Bashiok followed up when a fan asked what

Disintegrate is, if not fire. Arcane, according to Bashiok, despite the fact that the beam is red, not purple. (Another fan quickly provided a nicely-modified screenshot showing what Disintegrate would look like if it were appropriately Arcane/purple.)

The issue of spell damage types came up again a couple of days later on the 9th, when a fan asked what type of damage the

Soul Harvest does. Bashiok was less forthcoming that time, eventually admitting that they haven’t really determined the damage type yet.

The issue that comes up every month—LAN support in D3—returned on the 11th, when an editorial (on another site) spurred some big debate here. Our initial post was fairly short, but it grew greatly when we quoted a few of the excellent comments into the main post, spurring further debate. However this issue turns out, you can be sure it will continue to spark controversy, especially once we see how Blizzard handles the “must use B.net to play MP” issue with Starcraft 2.

Later that same day Bashiok gave a bunch of good replies to questions about shared item drops. Everyone in the party can see (and activate) health orbs, and while issues like the ability to instantly re-drop unwanted items, and how much party members must share in the combat to earn drops are hot topics; they’ll have to be more completely addressed in later game polishing sessions.

Bashiok made another revelation a few days later, when a fan pointed out that

Acid Cloud didn’t seem like a very Wizardly spell. Bashiok replied that it wasn’t. Not anymore, since the spell had been transferred to the

Witch Doctor. We weren’t given any word about how, if it all, the spell had changed in function or effect. Indeed, Acid Cloud was in the WD’s

Voodoo Skill Tree as of Blizzcon 2009, though it was too high level a spell to test out.

multiplayer Diablo 3. Players must be “active participants” to earn drops, there may be party controls to boot leeches and griefers, and all of the related issues remain under construction. Realistically, this sort of thing always gets ironed out during the Beta, when the devs can finally see how the rules they’ve set up actually work with real live exploit-seeking players. 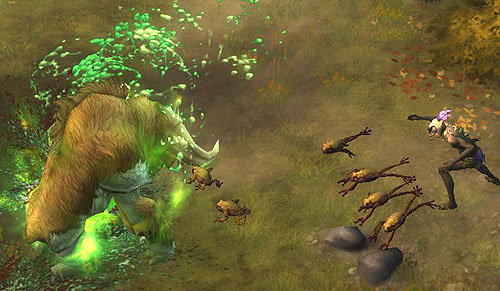 The 16th began a several day series of posts about the Witch Doctor’s (underrated) spell,

Plague of Toads. A fan posted a forum thread talking about how much he hated it, to which Bashiok replied, “Don’t put points into it.” It was a short reply, but valid; not everyone can like every spell. I chimed in on the news post, sharing some of my enjoyment and appreciation for the spell based on my Blizzcon 2008 play testing, and that kicked off much debate. It continued the next day, when Bashiok returned to the thread and took a more conciliatory tone, with several lengthy posts explaining his attitude, reasoning, and the variety of spells in the game, if not very much more about the amphibian spell itself.

The 17th saw a great post commemorating the first year of Diablo 3 wallpapers. With more than 200 (at that time) in the gallery, HolyKnight had a hard time picking out just a dozen or so to represent the year’s output of community artists. He did a nice job at it, though.
On the 18th Bashiok made a post about an issue that’s seldom given the attention it deserves:

sound design. Bashiok talked about how important sound effects are to making the skills and other game feature work, and confirmed that Blizzard still handles all their own sound effects in-house, as well as providing some of the voice talent as well.

On the 19th Bashiok elaborated on a game change that’s been kicked around a fair amount; the fact that Diablo 3’s surface areas are non-random.  Those levels will not be identical every game (as some surface areas in Diablo 2 were: Travincal and the Chaos Sanctuary, for instance), the spawned monsters will vary, and large sections of D3’s surface areas will vary as well; one section might hold a town, a ruins, an NPC with a quest, a pack of boss monsters, etc; something different each game. See the

page for much more detail informed by Blizzcon playtesting.

July 22nd brought news that Blizzard would be attending the upcoming GamesCon show in Germany, with playable Diablo 3 machines in attendance. This was the first chance for anyone to play the game anywhere other than Blizzcon, and European fan excitement was palpable.

On the 22nd Bashiok cracked open a can of worms that exploded a few months later, by confirming that as of now, no weapon switch hotkey is planned for Diablo 3.

On the 24th we saw July’s first news of note that wasn’t a Bashiok forum post. A fan won a sculpture contest with his rendition of the Diablo 3 Unburied. Congrats!

July 27th brought the first in-person views of the first Diablo 3 Barbarian statue, when it was displayed at the San Diego Comic Con. Pictures were taken. Movies were recorded. Drool was expectorated.

On the 28th Bashiok ended his month-long reign of terror with a long post about the necessity and function of class-specific weapons in Diablo 3. Much contention was created by this topic, and Bashiok returned to the thread the next day for more replies.