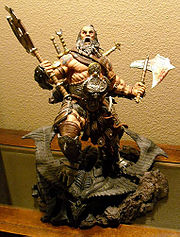 In 2009 December was a busy month, with a continuing barrage of interesting Torchlight-related news, lots of quality posts from Bashiok, and a lot of fan-created content and info as well. Things grew a bit stale later in the month, largely thanks to the holidays: there were no new Twitter/FB posts after the 15th, or forum posts after the 19th, and yes, like an embittered spouse, we miss them, no matter how much we might complain about the ones we get.  Fans were still around during and after Christmas, and debates over v1.13, holiday in-game content, and more animated the festive season.

Also, if you’ve enjoyed, been informed by, want more of, or at least experienced something less than extreme annoyance at this series of 2009 in review posts, the comments for this one would be a good place to share that reaction. Or if you have suggestions for how these monthly reviews might be improved, we’d be happy to hear them. The future plan is to post one of these when each month ends, giving occasional readers a good way to catch up on what’s been going on.

The first of December marked a bold new era, when Blizzard extended the social media experiment that began with Twitter by starting up Facebook pages for all three of their gaming franchises. Thus far the Diablo one has been fleshed out with screenshots and low-info content pages, and all of their tweets are mirrored, and sometimes expanded, on the Facebook page. Initial fan reactions were fairly negative, but those were more about social media backlash than anything in particular Blizzard was doing. Hardcore fans (the type who read detailed year in review features) generally find twitter/FB useless, since it’s not “new” info. But those social media pages aren’t targeted for hardcore fans; they’re targeted to casual fans, and it’s not yet clear if that outreach is bearing fruit.

The 3rd began the era of hardcore Diablo 3 merch, as the Barbarian overthrow statue shipped and was received by various eager fans. Many of whom posted photos of their new, several hundred dollar treasure.

December 2nd brought a more cerebral debate, when fans were invited by consider the effects of adding religion and morality to the game world of Diablo. The Diablo series has been remarkable for being entirely free of moral or ethical decisions. Players are the good guys, monsters are evil, and they are to be killed. It’s not possible to play a character who isn’t a good guy, outside of roleplaying PK efforts. And judging by the feedback to this commentary, most players are fine with that system.

Torchlight news items, especially ones related to TorchED, the officially-released mod-making tool. An enterprising fan created a dungeon, and stocked it with monsters, more than adequately recreating the dungeon shown in the Diablo 3 gameplay movie released at the Paris WWI event. This revived an issue from November; the contrast between most RPG makers and their eager acceptance of fan modding, vs. Blizzard’s repeatedly stated disinterest in it re: Diablo 3.

The 7th saw one of Bashiok’s longest and most content-rich forum posts in recent memory, as he ably defended the function and purpose of

December 10th brought shocking news, when the v1.13 patch suddenly appeared on the Patch Test Realm. Fan reactions didn’t exactly drip with gratitude, and grew more negative once people had had a chance to read through the patch notes and found them lacking. This despite the fact that virtually no one is actually testing the damn thing. Bashiok made some replies later in the month, insisting that the patch team wasn’t done yet and that the player feedback was being listened to, but that we wouldn’t see any changes until the new year.

The only mystery about the patch, the Klar and Tryneus name change for two of the Act 5 mercs, was delved into on the 12th, with mixed results. A later vote revealed the profound cynicism of most Diablo fans, as a majority of you guys thought the name change was nothing, or just a distraction from the suck of v1.13.

The 17th brought another interesting bit of news, when Bashiok revealed that Diablo 3 would not have a changing day/night cycle. Different surface areas will be light, dark, and in between, but each area will always be the same time, so the artists and designers can pick a style of lighting that’s more appropriate and beautiful for an area. Fan reaction to this was mixed.

On the 21st we get the first bestiary update in months, and it’s not even new; just compiled from various sources in the Diablo Wiki. Still, a shiny new page for the Morlu Caster was welcome. It’s the main enemy seen in the Monk cinematic, and a demon referred to previously in the

Diablo novels. Let’s hope for some actual new monster updates from the official site in the new year; nothing’s been updated there since well before Blizzcon!

The 23rd brought a return of an issue we discussed last Christmas; seasonal bonus content. When the topic came up in 2008, most fans were against any sort of seasonal/holiday features in Diablo 3. There was a wider variety of opinions this time around, though many fans are still against any sort of holidays in game, whether they originate in the game world or the real world.

The last news of the year came on the 29th, when a psych grad student posted a paper analyzing why players find it so exciting to score a phat lewt drop. The online community is less than amazed by his conclusions.