As several readers remarked on in comments about the new

Diablo 3 Merchandise revealed during the panel from the SDCC last week… the Butcher seems to be back. Ahh… fresh meat!

He’s featured on an upcoming Diablo III t-shirt, and as was noted in the comments, the t-shirt artwork looks very much like an axe-wielding, long-horned demon seen on page 5 of

Moreover, this isn’t the first sign of the Butcher in Diablo III. He was featured on

, but that just seemed like nostalgia. That year’s demo was set in the sunny Act 2 desert, and the image on the shirt was kind of a retro-style update of the D1 Butcher.

This new shirt, poor though the image quality is, clearly shows a very new Butcher, with a massive battle axe and huge, fluted,

-style horns. And that, plus the matching concept art in Cain’s Journal, seems a pretty good indication that we’ll see the Butcher again.

gazelleI’d imagine this will prove a popular return. Judging from the forum threads I’ve read on this issue, the Butcher is definitely the most popular boss monster from Diablo I, and his opening verbal and physical attack, plus his gruesome “Butcher’s Block” room is still cited by numerous Diablo players as one of the most memorable and scary things they’ve ever seen in a video game.

I don’t know if the new Butcher’s lair and battle cry can match the D1 version, especially as large as that’s grown in our memories, but it will be fascinating to see how the developers handle this classic demon’s return. After all, most people playing Diablo III will not have played a game as old as Diablo I, so he’ll be new to most of them. If he’s new to you, check out 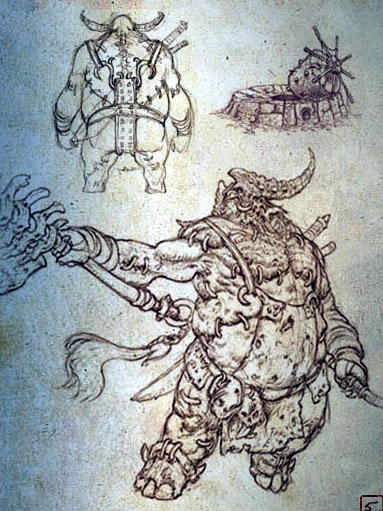 , his his monster page, and even quest page strategy guide. That’ll get you up to speed.

Update: Spurred by this news, readers are filling a forum thread with their Diablo I Butcher reminiscences.