The initial video of the Blizzard Merch panel from the SDCC only covered the first 23 minutes, and didn’t break any new ground. Now that Gamespot has posted video of the the full 58 minute session, our resident Sherlock Holmes Fmulder sat through the whole thing and found new 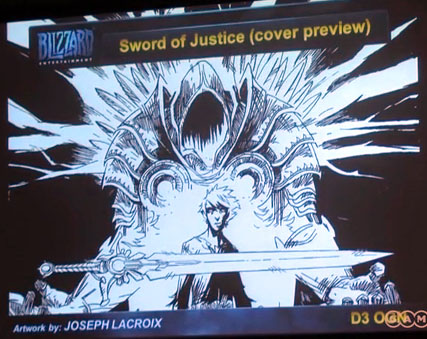 Amid all of the talk of Starcraft and Wowcraft comics and graphics novels and other such merch, they slipped in the reveal of an upcoming Diablo III comic book. It’s going to be called “

The story takes place during the twenty years between the end of D2 and the start of D3. The protagonist is a young man named Jacob who lives somewhere near the Mount Arreat Crater. As we know, Tyrael used his sword to destroy the Worldstone in the concluding plot event of D2X, then vanished and has not been seen since. Tyrael’s sword did not vanish though. It remained in the mortal realm after Tyrael’s disappearance, and somehow sent visions into Jacob’s head, leading him to discover the weapon. Mega-twink! Jacob takes the weapon and by it is compelled to serve as the “avatar of justice” on Sanctuary.

Here’s what the Bliz presenter said about the story:

It’s got a mortal hero, it’s got barbarians, it’s got demonic corruption, and a sexy wizard. Everything you could want.

The image to the right is concept art for the cover of issue one. There are a few other pen and ink sample pages shown (though they’re small and hard to make out) on the video, so if you want more watch it for those and the original telling of the info I’ve summarized above. The Diablo comic part starts around 29:40.

So does anyone have excite? Do you read comic books? Will you buy five issues of a Diablo III comic book? Are you just generally sick to death of Tyrael being the only character in every Diablo story?

All Diablo 3 Games now on Sale including Necromancer Pack