A fan asked about

Mercs, and got a “staying the course” reply from Bashiok, plus a bonus Rick-Rolling. Of sorts.

Has there been any info if there’s going to be any sort of NPC “companions” like mercenaries??
Bashiok: No. BUT! There’s obviously some of the ‘follower’ mechanic seen in our gameplay demos: http://www.youtube.com/watch?v=iBKqwdxUH8U

Bashiok can you at least let us know if there is still Hirelings and Followers as announced or if it has been iterated to a different system?

Bashiok: We’re essentially on the same design threads we have been since before announcement.

Elsewhere, a fan asked whether

Ray of Frost or

Disintegrate was the coolest looking

Wizard skill, and got a reply from Bashiok about…

BUT we still don’t know if runes will introduce a huge twist connected with these skills!

The core skills are pretty similar, except yeah, ray of frost will slow/freeze enemies. But with runes they diverge in a lot of cool ways. 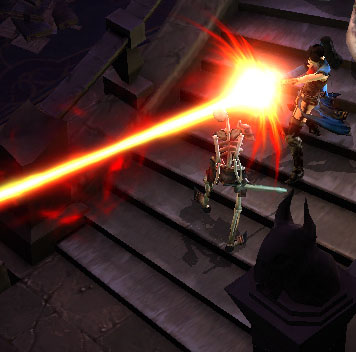 No one but Bashiok could answer the question about the skill runes, but I have seen both skills, so I’ll comment on the OP’s question. As of last year’s BlizzCon, Disintegrate looked awesome… for a laser weapon in some kind of SciFi game. It was too straight and precise and neat for a skill in the Diablo world, leading me to assume the BlizzCon 2009 version was a temp graphic that would be scratchier and grittier and more visceral in the final game. The beam needs to make some subtle zigs and zags, and to bleed off little pieces of light as it travels.

Disintegrate should be straighter than say,

Electrocute, but neither should it be like lying a ruler on the screen.

Happily, the concept art version of the skill shows it much how I think it should look in the game, so I’ll be surprised if it’s not been upgraded (visually) by the time we seen it next. In October, hopefully.