Bashiok posted a short follow up to some questions from a few days ago, and let slip something that’s actually new news. Here’s the first part, which was posted last week along with some other replies on other issues.

Have there been any changes to the player skills system? I.e. the way we learn new skills and shape our characters.

Bashiok: Yeah, I mean, there?s no real trees any more. Kind of. But this is something we?re not talking about until BlizzCon. You?ll see it then. It sort of streamlines the tree system, but there?s still a skill tree there technically if you wanted to map it out? and there?s? other stuff, I?ll stop there, it?s getting confusing.

The follow up brought some new skill info from Bashiok, along with another confirmation that the skill tree layouts have changed completely, since what we saw at last year’s BlizzCon. 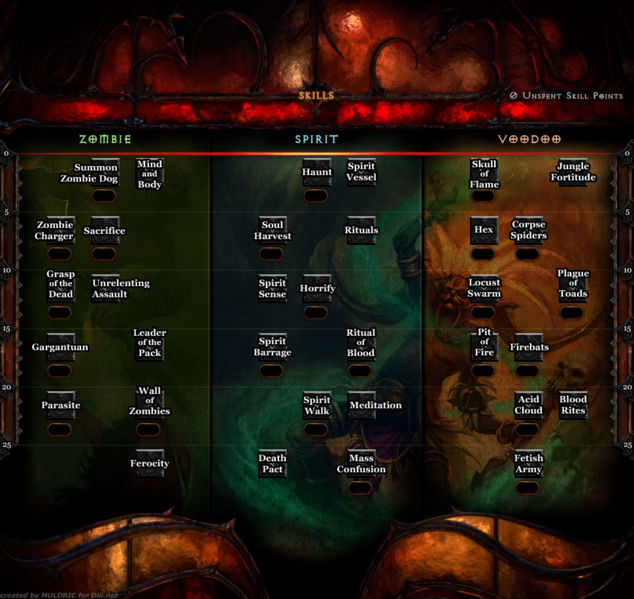 Will how skill caps are raised (above the initial cap of 5) be talked about at BlizzCon?

So is it basically like this, with a few changes/additions?

Bashiok: No. Quite different. There’s, like, more stuff, but also less stuff. Kind of. But not really.

No, that wasn’t said at last year’s Blizzcon. Or any time since. We’d been told that 15 would probably be the maximum level (not including +skill mods from items?), but not how characters would progress from 5 to 15. Upping the potential ceiling to 10 on Nightmare and then 15 on Hell seems like about the easiest way to go about it.

It could create some interesting play incentives too,. Will untwinked/unrushed characters now want to hurry to Nightmare, rather than doing exp/items runs in late normal, to get the skill ceiling raised? How high will the Clvl requirements be for raising skill levels. How greatly will a skill increase in power between levels, especially between higher levels?