In the forums today, Bashiok gave a big reply to five questions about

runestones. The info isn’t really new, since new info wasn’t required to answer the questions, but there’s some good, if tentative, info about possible rune rarity and usage requirements.  It’s a long post, so click through for the whole thing. Here are the first two of the five questions/responses.

1. Will all ranks of runes drop or will it function more like gems where the high level runes have to be crafted to be obtained?
All ranks are currently planned to drop, but that could change. Many ideas have been thrown around about runes being obtained through other means, but an increasingly lower drop rate as the runes go up in rank seems like a good option still. The question still comes up how they’ll be bled out of the economy, and we have some good ideas for that.

2. Are all five runes equally as rare or is one or more types rarer than others?

That’s a good question, I can see how that could be justified. I don’t know what the plan is there, I’ll have to ask. My gut is that it would be too much to keep some type of rune ‘power rating’ in mind when altering drop rates, especially post-release where patches could jumble them around a fair bit. “This rune sucks now but it’s still the rarest!” Also, ideally, each rune type will be equally viable to different people and builds. Saying one is more powerful than another would mean we’re probably balancing them to be, and that’s not the case.

Are these streams of Bashiok consciousness annoying or what?

3. Will the increase in rank continue the change that the first rank made to the skill? For example, with the WD blow dart skill, the alabaster runes turns the dart into a snake. What does a higher ranking alabaster rune do?
Yes the mechanic stays the same for the rune type in all ranks (more or less), it simply increases in power. For the alabaster in poison dart example I’m actually not sure the increase in effect, but likely plays off of the stun effect (higher ranks stun the target for longer). Runes that reduce cost reduce even more cost as the rank increases. A rune that would cause multiple projectiles would fire even more projectiles as the rank increases, etc. It’s not necessarily a hard and fast rule though that the increase must only be one thing. Maybe it means more projectiles AND ups the damage a little to make sure it remains competitive with other runes or skills. It has to be a somewhat fluid system.

4. Around what level will you have to be to use the highest level rune?
The limitation, currently, is based on level of the skill. Level of the skill is determined by character level to pump points into the skill, but it’s also determined by upping that skill to higher caps. As a completely made up example, you may need 6 skill points in a skill before you can socket in a rank 3 rune. But you can’t spend more than 5 skill points in that skill until you up the cap! Ha HAH!

Mechanics for increasing a skill’s cap are still in design.

5. How rare will the high level runes be? Can we expect to have top rank runes in each of our skills or will they be extremely rare?

That comes down to drop balance, but the intent is that higher rank runes are a long term character improvement goal. For that reason they’re incremental power upgrades and not necessarily giant leaps of “If you have rank 4 you will be decimated by rank 5”. Although I have a feeling saying this will come back to bite me.

Two issues. #1. The desirability of different types of

runes is a curious matter. Previously, when runes were more basic and predictable in their bonuses, it seemed clear that, for instance, Power runes would be much more sought after than Energy runes. Now that runes have the substance/color names, the devs seem to have scrambled around their bonus properties, perhaps in an effort to make all of the runes equivalently-valuable. The Crimson Rune, formerly Force/Power, generally adds damage and/or fire to skills… but not always. 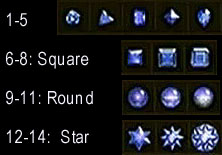 gems are VASTLY rarer than high level runes. Gems go to 14, and you can only find up to L5, forcing you to cube up 19,683 L5 for a L14, while Runes go to 7 and you can possibly find all 7? (It’s not known if we’ll be able to cube up runes to higher levels.) This seems odd, as hugely useful as runestones are; more useful than a small increase in the +dexterity, or whatever, some gem is granting.

Is this way out of balance, or will higher level gems add bigger bonuses than we now think, and/or will stat bonuses figure much larger in your total damage output than we expect? Or will runes be fairly common up to say, L5, with L6 and L7 runes ultra-rare, to give us long term item-hunting, char-improvement goals? You’ll be forever cubing up your Gems while you hunt and hunt and hope to find those L7 runes…