A fan asked about the special reveal class banner sigils, and if they’d ever be available again after this pre-launch promotion. Bashiok said no, but that there’s still time to earn all five of them pre-release. 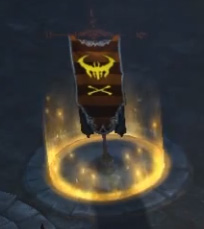 BUT! you can get some sweet exclusive banner sigils from our Darkness Falls. Heroes Rise. promo site which will be for use in the retail game.

Are these sigils exclusive to this launch event? ie 2 years from now, only those of us who took part in this event will have the sigils…?
They are exclusive to the launch event, yes. So years from now someone will say “ware u giet dat sygyl?” you can say “QUIET HEATHEN! This sigil was bestoweth upon thy banner by the launch site.” and they’ll be all like “oooooh… wuz thattt?” and then you slay them and take their ear.

yeah they are supposed to be exclusive to the launch event… Im guessing the blank circle is where those who hadnt realized what was going on there will have the chance to get any they missed
Correct there’s a two week grace period where you’ll be able to get any/all of the sigils, which closes forever on… I believe May 17. After that, those sigils belong only to those who claimed them.