I was sorting my screenshots and filing them into various

Bishibosh returns in Diablo III! Well, sort of. The Den of the Fallen dungeon spawns fairly rarely in the Weeping Hollow, and rarer yet is one of the Fallen Shaman skeletons found inside it labeled with the name of the Diablo 2 boss. He doesn’t drop any better gold than the other such skeletons; it’s purely a cute little

Easter Egg. Thanks to Roderick for being the first to send in the pic. 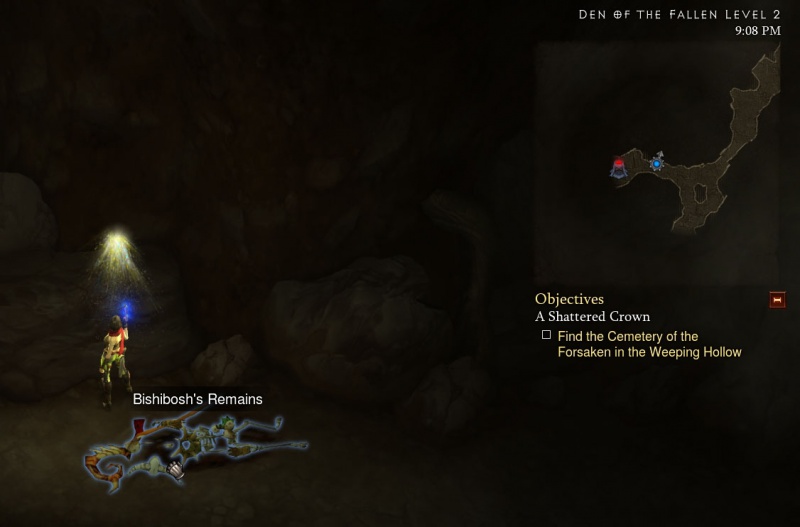 One of the odd things about the Demon Hunter’s

Chakram skill is that the whirling projectiles can pass through walls and even up or down levels. This makes it quite handy in the dungeon, as you can ruin monsters above or below you who can’t fight back. It’s odd for scouting out terrain though, as the behavior of the Chakrams shows what areas of the game world are actually functional, and which are just artwork.

For instance, the Chakrams will bounce up and down stairs and levels within the accessible dungeon, but if you fire them off to the sides of levels, they just sail off into space without any drop in elevation. Same goes for non-interactive artwork pieces within levels, such as the meteor crater, here seen on Cathedral level 3. It looks like a pit, but it’s just a flat surface with an odd skin, in the game code. You can see a similar effect with the Witch Doctor’s Firebombs, which drop down into canyons and over ledges sometimes, and just blow up in midair, on an invisible floor, in other places. 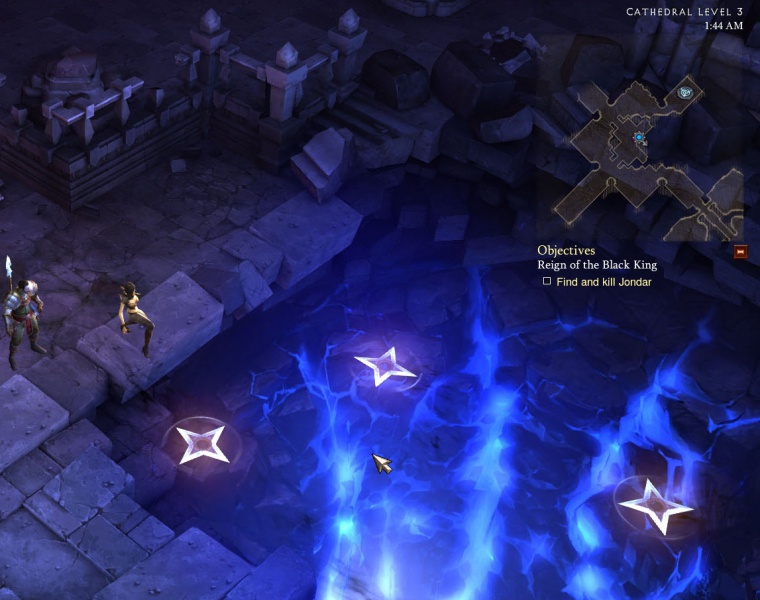 Click through for a bunch more shots and captions explaining various oddities, tidbits, new things, or

Here’s my female Barbarian with a Petrified Trunk. It’s not an especially effective weapon, and I’ve never found one in the beta with decent mods, but it sure looks cool to hold and to smash with.

The Black Mushroom patch was found near Adria’s Shack, earlier in the beta. It’s now been moved, and can be found, once in a while, in an empty room in the Cathedral level 1. This is, of course, an homage to a funny Diablo 1 quest, and the mushroom is widely-expected to be one of the ingredient for some secret crafting recipe in Diablo III. 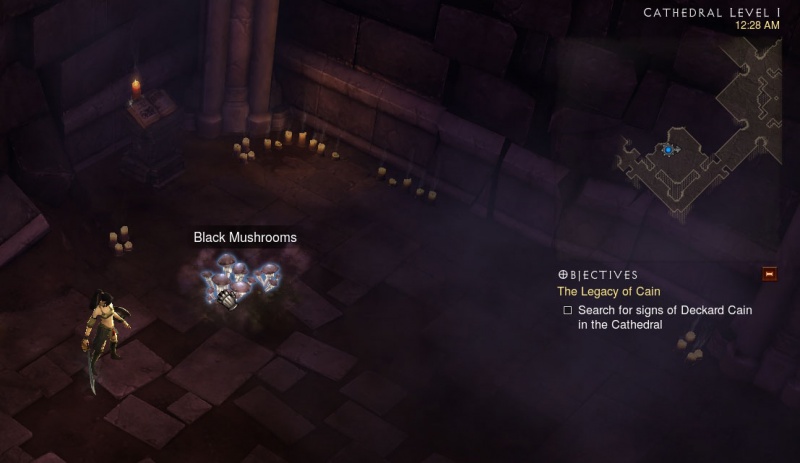 Lately, every patch has shuffled around the skills, changing up their level requirements, often enough to make new

runestone effects obtainable by the level 13 cap in the beta. For instance, here’s

Explosive Toads, the first runestone effect in the Witch Doctor’s

Plague of Toads skill. You can see the bug in the explosion graphics, on my system at least, with a kind of line through the two halves of the blast. Buggy visual aside, the skill is greatly more effective with the rune effect, adding higher damage and better hitting with the AoE boost from the blast. 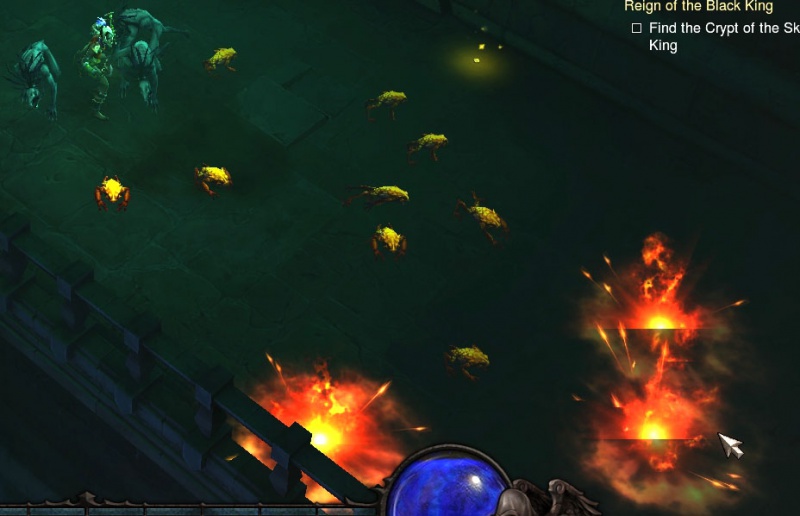 Mongrels, courtesy of the 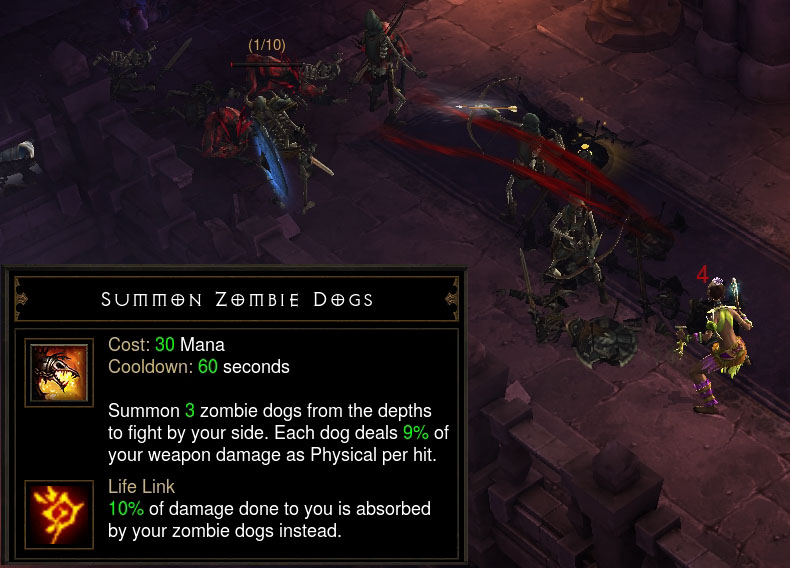 Hooked Spines, a runestone effect in the Demon Hunter’s 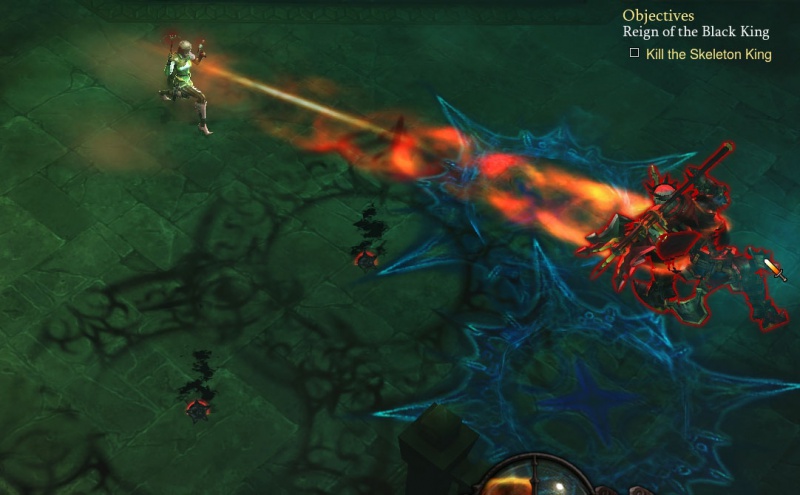 There are a *lot* of randomly-occurring SuperUnique bosses in the Diablo 3 Beta. Most of these are very rare; I’ve played quite a bit of beta and still only seen about half of the ones collected on Hardrock’s forum list, and there are more being added in every beta patch. Two I did see recently are in shots below; and both have odd Easter Egg-style names (which is true of a lot of these purple-named Elites). Larson the Strange, Eater of Vegetables. Aaron Bright, Deceased Bard.

With well over a dozen such monsters in just the first third of Act One, imagine how many we’ll see in the full game? 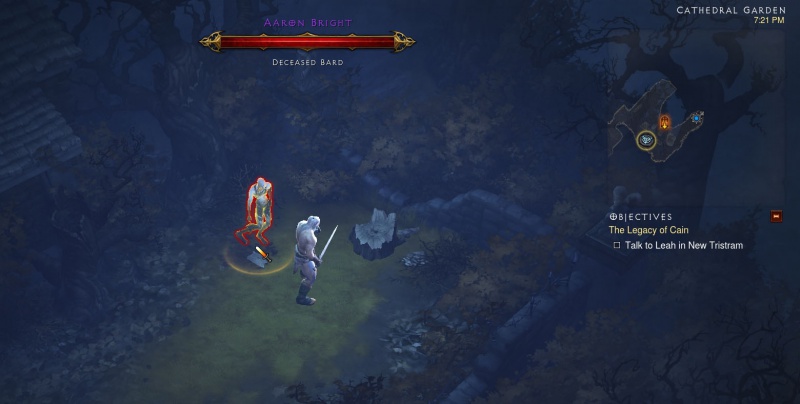 Finally, just because he looked cool (before getting wiped by the patch) here’s my Level 13 Hardcore

Demon Hunter from last patch. Both bows had some life leech, which paired nicely with the red light glowing down from overhead. Imagine how cool

Hardcore chars will look in the final game, with high level armor and weapons and more skulls and scrollwork borders and such? 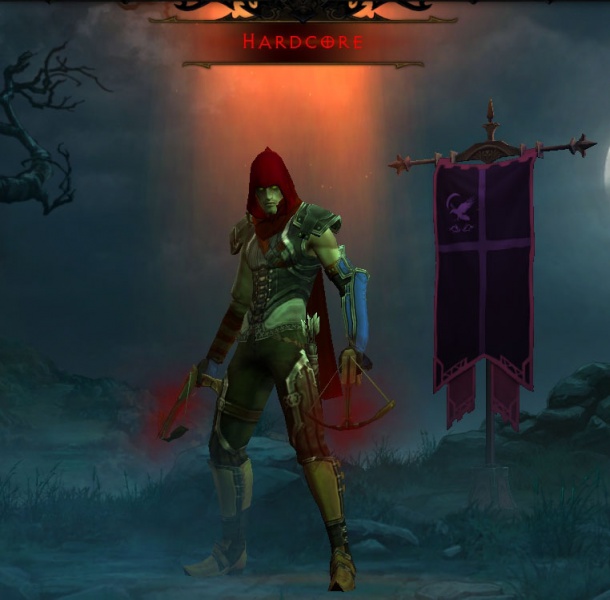