What would you do two levels away from

paragon 100 and you died? All your hard work, all your gear, and all your time gone. Wallow in self pity? Stop playing the game entirely? Or rise from the ashes stronger and more determined? Protatoe took the latter, and his story is after the bump. 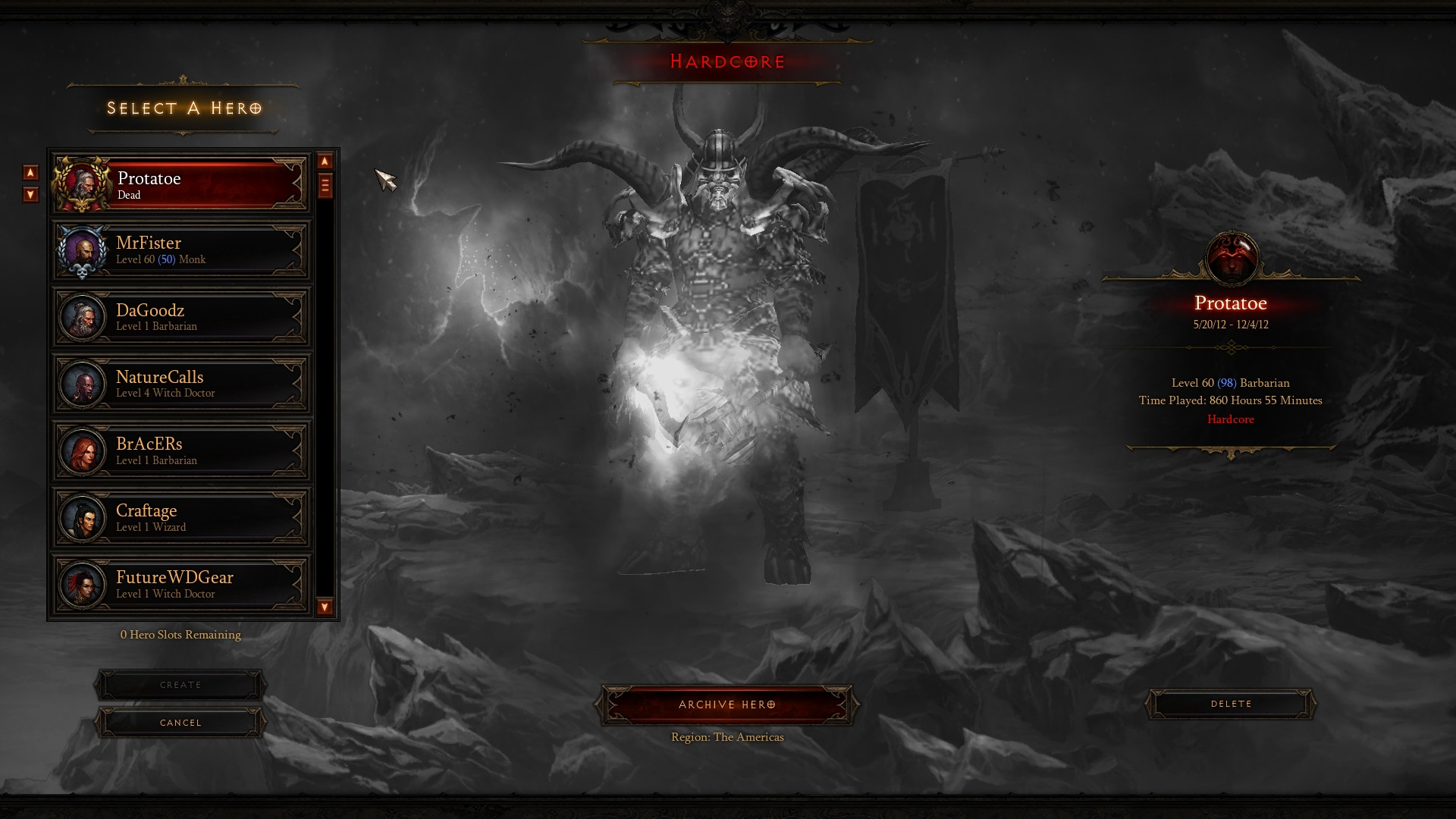 So set the scene your paragon 98 on your way to 100 and what happens:

My first barbarian “Protatoe” was one of my first characters that I made after the launch of Diablo 3. I had always played him as a “tank barb,” and used a very defensive build with Rend and Leap.

I forget when it was exactly, but after inferno got a couple of nerfs I started to shift toward getting more crit/DPS gear on my barb and sacrificing some EHP. During the weekend of Hurricane Sandy, I bought an offhand and tried out the whirlwind spec. It took a lot of getting used to at first, but I have never gone back since. I had never been able to farm nearly that fast so I was in all out exp farming mode after that.

A couple of months later, I had reached level 98 with only one person ahead of me in the race to level 100 on the Hardcore America servers. I was getting about 75 million exp per hour farming mp1 using a Leorics Signet, Hellfire ring, and radiant star ruby in my helmet.

When I was about 1/5th of a bar away from hitting level 99, I teleported to the Bridge of Korsik waypoint to clear the Fields of Slaughter. I could see a ton of enemies on the edge of my screen, but none of my actions were registering and I could not attack them. I tried to pause by hitting escape and I tried to use health potions, but nothing was registering. I knew I was in trouble because I had not put out a single tornado yet with sprint. My connection came back about 15 seconds later and I was dead.

What was your highest level death prior to this?

My highest death prior to this was a level 60 witch doctor. That happened pre-paragon levels. I had gone a very long time without a death before my barb “Protatoe” died.

How did you react? Any broken monitors?

It happened at the very end of the night after I had just finished farming almost an entire Paragon level. I basically just sat there looking at my monitor in shock. A complete router reset like this had never happened to me before since I moved into my apartment two months before this happened. I talked to my friend Diamond on Skype for a bit and told him that I would probably be taking a break from Diablo 3 for a while. After work the next night I changed my mind and I ended up making another barb and Diamond power leveled me to 60 in about two and a half hours. I spent about 700 million gold on new gear and started up farming again.

How did you decide to return to your barb?

The main reason that I decided to return to barb is because I had another really nice barb hellfire ring, and a lot of backup whirlwind barb gear in my stash. At the time I died, I was using gear that was geared towards farming low MP for experience. I still had a nice offhand dagger, a really nice rare ring, and a few other backup pieces. I also had about 1.1 Billion gold at the time I died so between my backup pieces and the gold I had to spend, I was able to create another whirlwind barb that could efficiently farm up to mp4. 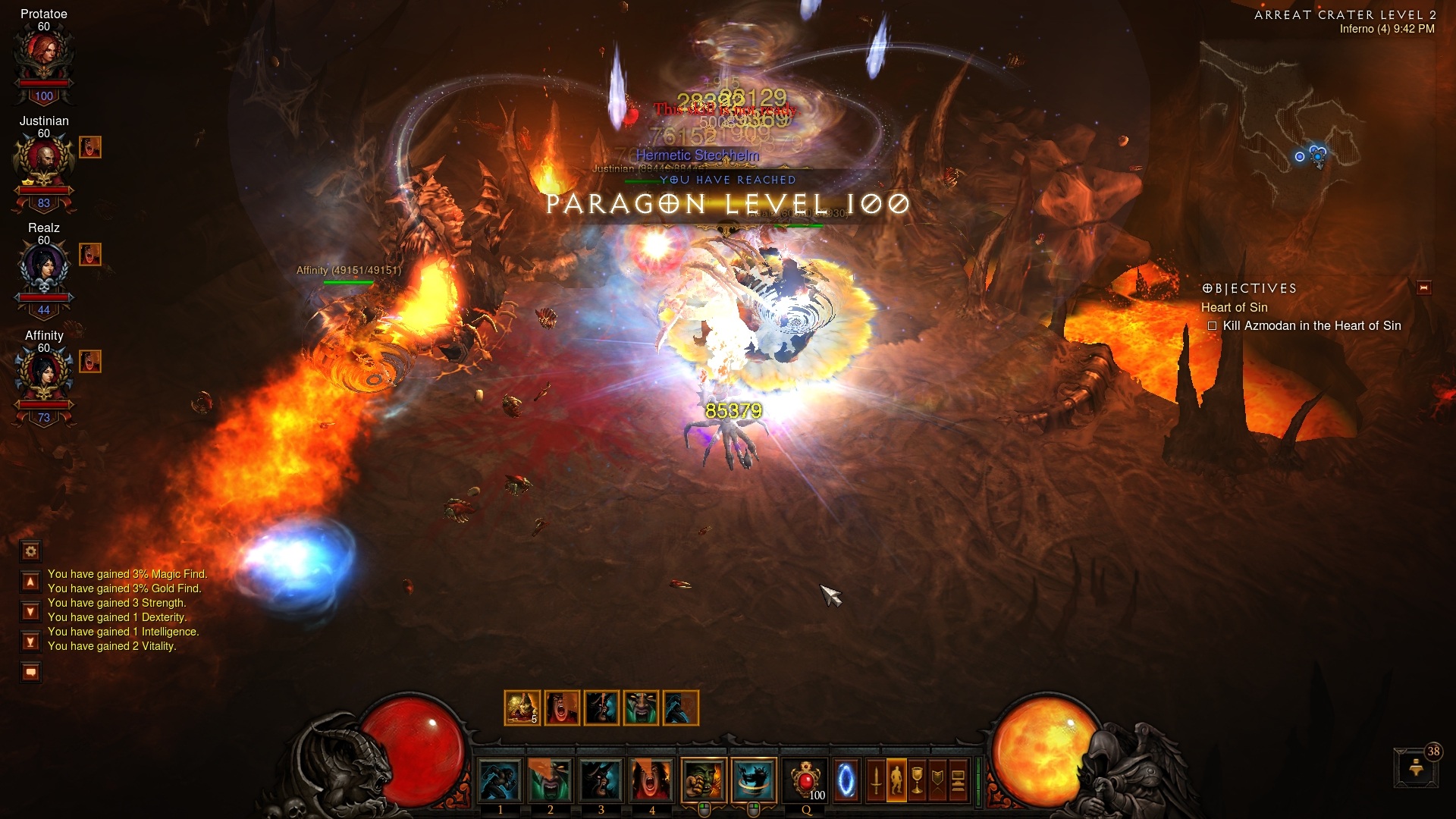 How did it feel to ding 100 after such a huge loss? Were you extra hesitant at 98?

It felt great to finally ding 100 on my new barb. I did level 90-100 after the patch that buffed experience gained in higher monster powers, so it felt really fast. I did pretty much the entire trek from 0-100 on my second Barbarian on mp4, so I wish that patch came sooner J I was extremely paranoid that I might DC again, but luckily I never DCed again after my first barb’s death. It is a very annoying choice for hardcore whirlwind barbs to solo or play in a group. Solo is much faster and more efficient, but if you DC you have very little chance of survival. Group play is slower, but much safer. I don’t think I solo’d at all after level 85 on my second barb because I was so paranoid.

I dinged level 100 at about 280 hours played. Of course, not all of that time was spent grinding. I did ubers a few times, etc. The second trek from 0-100 was way faster than the first one. I was much more experienced with the whirlwind build and I was already used to maximizing my XP. I also have a Monk who is now level 88 and a Witch Doctor who I got to level 62. I’m going for level 100 on the monk next!

What did you learn from your death that others could take away from?

One lesson that I learned is that if anything feels slightly off with your connection or your computer, just stop playing or play in a group. I had been getting very small lag spikes before I died but I didn’t think anything of it. Ever since then, I completely stop playing if I feel any lag at all. Death is one of the most inefficient things that can happen to you in hardcore, so it is worth being extra careful.

What drew you to hardcore in the first place? Past D2 experience?

I had a couple years of hardcore experience in Diablo 2. I was back in middle school at that point, and I really don’t remember a whole lot about it. I do remember that I was in clan “PK” and I had a top barbarian named PK-Pwny. I played only hardcore in Diablo 2, so when I started Diablo 3 I left softcore at level 10. I think Softcore would just feel too boring for me and I would grow tired of the game way too fast.

As an experienced player any advice you would give the masses in terms of succeeding in Hardcore?

I think my best advice would be to play carefully and efficiently. Try to build a nice balance on your character between EHP and DPS, and don’t lean too heavily toward either side. Only farm on monster powers that you can completely crush. It is easy to look at the monster power bonuses and think that you should be turning up the MP, but farming faster will yield better results in the end. Don’t get discouraged if you go a few days without finding anything valuable. That 1 billion gold drop could come at any time!

After hitting 100 do you risk the barb still?

I still play my barb occasionally. My barb is stronger than ever now that I have put an Amethyst in her helmet and I am wearing a cold SOJ instead of a hellfire ring. My main goal at the moment is to get my monk to level 100 though. I have not done any solo play on my barb now that I have hit level 100 to be safe.

My main goal is to level my Monk to 100. I have a Witch Doctor too but he is mostly good for speed farming low MP’s, and with the new patch I prefer to play my Monk and Barb. I am definitely going to stop playing so much once I finish leveling the Monk.

What keeps you playing?

I love to constantly improve my characters and speed up my farming through gear upgrades. Even after playing since the release, I am still finding upgrades for my characters all the time connecting with players online and through the auction house. My friends also play a huge part in keeping me playing. I can log on to Skype or Teamspeak and have people wanting to farm at any time.

Do you play solo or group?

Recently I have done a lot less solo than I used to. This is mostly because I am playing a Monk who works great for team play. I do a cyclone strike build with overawe and I think that type of support build greatly benefits any team composition. I still enjoy turning on some music and solo grinding every once in a while. Sometimes it is hard to feel the difference between gear changes or different skill builds unless you solo to test them out.

Hopes for the future of the game?

I feel like Diablo 3 has a lot of wasted potential. I think the first priority really needs to be increasing the monster density in Act 1 and 2. Everyone knows that Act 3 Alkaizer type runs are the best way to farm exp. There needs to be more choices in places to farm without feeling like you are being super inefficient. I also feel like not enough priority is placed on issues that are very important such as only being able to see more than 5 buffs at once, frame rate issues in zones like Rakkis Crossing, the Dashing Strike and Furious Charge bug where players could get stuck underground and unable to attack, etc. These are huge issues but have gone months without any changes.

I really hope Blizzard can think of some changes for a future patch or the expansion that are interesting enough to bring back some of the player base. In the end, Diablo 3 is still a great game and I have put in so many hours that I really can’t complain.

Having lost a few characters myself I understand Protatoe’s drive. However, the largest paragon I’ve lost is 13, so when the time comes who knows if I could answer that call. What was you biggest loss so far?How did you react?

One Life to Live covers the Hardcore play and life style in the Diablo community. It is written by Xanth and published weekly. Post your comments below, Follow me on Twitter @HCXanth or contact the author directly. For all the archived news about Diablo 3 hardcore check our Archives!