The runestone system in Diablo III is one of the most interesting game features, with the rune effects essentially quintupling the skill variety. Everyone seems pretty happy about that, including the developers. The thing that they keep working on though, is how the runes will be presented in the final game.

The initial plan was just to make them like runes and gems were in Diablo 2. The problem there is that with just seven levels and five types of runes, either the devs made the highest level runes are ultra rare and nearly unfindable, or else players would all have a stack of extra level 7 runes lying around before too long. To attempt to counter this and give runes more variety, the developers have been experimenting with a variety of “unattuned” runestone options. 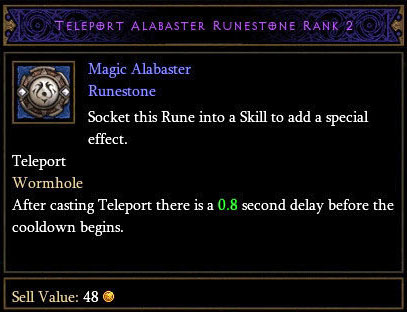 One that I thought promising was a magical modifier (like the affixes on items) that would only be revealed once you socketed the rune. That may still appear (I’d bet on it in an expansion) but it doesn’t seem to be in the current system. Furthermore, just tacking on prefixes/suffixes wouldn’t change the basic problem of level 7 runes soon becoming too abundant; players would just become picky and only want a lvl 7 rune with a really good affix as well.

With those issues considered, the devs are now looking at making the “unattuned” part apply to the runestone type, so you wouldn’t know if your rune was golden, crimson, obsidian, indigo, or alabaster until after you socketed it. Furthermore, the runestone would then take on those qualities permanently, and become unusable in any other skill than the one you’d socketed it into.

This system is what’s operative in the game now, and as some people have tested it out in emulators, their feedback on what it’s like to actually use it is instructive. Click through for quotes from emulator testers and much more about how runestones work, might work, and should work, in Diablo III.

Runestones are not enabled in the beta, and wouldn’t be findable so early in Act One anyway. However, since they are in the game code, they can be experimented with via one of the Diablo 3 emulators.

Disclaimer #1: Using an emulator is a violation of the EULA and the TOS and makes Bobby very, very unhappy. IncGamers.com would never recommend that you do something like that.

Disclaimer #2: It’s not possible to “play” Diablo 3 via an emulator, since all of the monster AI, spawning routines, random dungeon generators, etc, are stored on the server end. (As part of D3’s online only DRM.) What players can do in an emulator is spawn monsters (who just stand there) and then kill them. These monsters drop items, much as they will in the game, and these items are monster level appropriate, and thus can include runestones. Which can be used in skills, as we saw in some recent videos.

So what’s the runestone system, which seems to be forever under construction and iteration? Currently, all runes drop “unattuned” which means you can see the rune level (1-7) but not what type of rune it is. You only find that out when you socket the runestone into a skill. Once you socket your unattuned runestone, its type is revealed, attuned unalterably to that skill. For instance, if your

Rapid Fire, that runestone will become

Web Shot (AKA Alabaster), or

Bombardment (AKA Crimson), etc. This is permanent; that runestone is only ever Rlvl 5 Web Shot, or Bombardment, etc. The runestone can’t be re-unattuned, or used in another or Demon Hunter skill, or by any other class.

One interesting side effect of this unattuned system is pointed out by Scorch Hellfire in the Runestone testing thread — this “unattuned until socketed” function renders irrelevant/obsolete the old system of runestone colors/types. After all, you’ll never actually have a golden runestone anymore. You’ll have an unattuned runestone, until you socket it into the Wizard’s

Electrocute skill and if it rolls Golden it becomes

Surge of Power. Or in

Brimstone Serpent. Or in

Snowbound. There might as well just be five possible runestone functions for each skill, without any reference to the five types of runes, since those no longer do nothing other than refer to a loose grouping of functions for the stones. It seems inevitable that players will just say, “I have a level 6 Korlic’s Might for trade.” rather than something like, “I have a Level 6 Crimson runestone attuned to Call of the Ancients for trade.”

In this system, players must find a lot of unattuned runes and keep socketing them into their desired skill until they get their desired effect. You would, in theory, be able to hold onto the runestones thus attuned, and trade them, or salvage them, or twink them to an alt of the same class, or save them for future use. Say you wanted Crimson in a skill 90% of the time, but in 10% of scenarios, (or for PvP) Obsidian was better. You’d be able to switch back and forth, though this would require paying the Jeweler to remove the runestone each time.

So how does this work in practice? Well, no one outside of Blizzard really knows yet. But Risingred has been testing it out via an emulator, his comments spurred this article, and he’s not a fan.

Been playing around with these in-game and man is it stunningly frustrating to not be able to get the color of rune you want with the unattuned runes. At first I liked the system, but after using it, I kind of hate it.

…I’ve gone through over 20 runestones trying to get a single color for my skill videos and it’s really frustrating. I’ve even done videos of me attuning runes trying to get every color; the shortest video I had (which consisted of me dragging and dropping runes onto skills) was 42 seconds.

I cannot imagine how much work and frustration would go into crafting runes to fill up 42 seconds of looking for a single color attunement, other bonuses be damned.

It’s a retarded system. They must see this.

crafting runestones work? Runestones can be salvaged to obtain

Rune Dust, which comes in seven levels and is not tied to rune type — all level 5 runes become level 5 Rune Dust. You can also obtain

Runestone Cores, but only from level 5, 6, and 7 runes. Presumably you get dust every time, but cores are rarer, and provide an additional hurdle/expense when you are crafting new runestones. We do not yet known the costs of this; you might need 3 or 10 units of dust, plus gold and possibly other materials as well. There appears to be only one type of Runestone Core, but you can assume you’ll need more of them to craft a level 7 rune than a lower level one 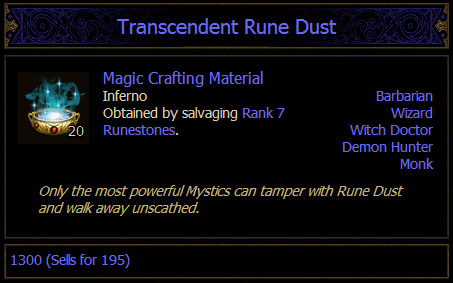 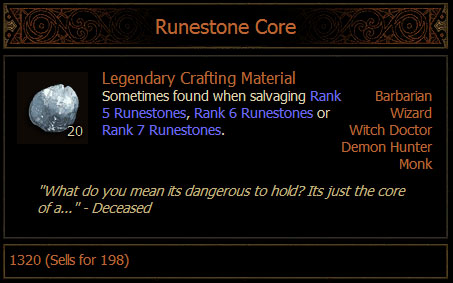 So where does this leave us? Risingred’s comments were what gave me the idea for this article, but I think (if the system stays as it is now) his objections will be less of an issue in the final game. Initially we’ll all be experimenting with different runestone effects and won’t be too annoyed at needing several tries to get any particular result. Later on players will just want specific runes, but that won’t be too hard to get with lots of play time, plus crafting, and especially when trading is thrown in.

Players will trade unattuned runestones for one price, and all the attuned effects will be valued by their popularity. Some effects will be super desired by cookie cutter builds, and will cost a fortune. You want the most popular rune effect in the most popular skill on the most popular class? That’s going to be damn expensive. Of course tons of people will be spending their unattuned runestones in that skill, trying to score one of the sought-after results, for their own use or for trading, which would impact on the price. It might actually be tougher to get the runestone effect you want in an obscure skill that no one ever uses except in a weird variant, since no one else is trying to make it and throwing their results into the Auction House.

A drawback of this unattuned system is that it might lead to inventory spam; after all, you’ll have 150 skills x 5 for all the runestones, x 7 for all the runestone levels. That’s pretty much your whole stash right there… except no one would hold onto all of those (other than crazed completionists), since 95% of them would be junk, or only useful at low levels, etc. You’d throw them into the AH, or salvage them.

The main purpose seems to be to diversify the variety of runestones, and to make the end game goal of getting level 7s, with the right effect, in all of your skills, much harder to achieve. And by the time we do, here comes D3X with an 8th level of runestones, plus random affixes!

Skills Elective Mode on by default in 2.6.0