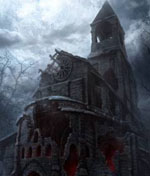 The tenth installment of On the Drawing Board moves away from specific game features and focuses more on the intangibles. Did you play Diablo I? Did you enjoy the horror elements of it, and miss them in Diablo II? The D3 Team has talked about their desire to make Diablo III a more moody, atmospheric, creepy, horror-filled game than Diablo II was. Do you like this approach? Do you think they can pull it off? We saw a lot of good

horror elements in the Blizzcon Demo, but whether the team can (or should even try) keep that up throughout the whole game is a topic worth discussing. Click through to view the evidence and join the debate.

On the Drawing Board #10: Horror Elements in Diablo

One of the elements of Diablo 1 that so many fans still remember fondly, and one that Diablo II did not improve upon, was the atmosphere of horror. Diablo wasn’t marketed as a horror title, and the game wasn’t filled with cheesy shock or scare elements, but many players still felt genuinely uneasy playing it. In a good way!

The Butcher is the most cited example, and his “Ahh, fresh meat!” cry as he bursts out of his bloody cell is still a classic, even 13 years later. (Go 2:20 to hear it, or watch the whole thing for the full Butcher lore experience.) And he was scary even without his short cinematic introduction, which was not activated in the final game though it was left on the CD. (Apparently the Butcher was going to have his own sublevel, like the Skeleton King and Lazarus do in single player, and this movie would have played before a player entered it.)

The Butcher wasn’t the only scary thing in the game, of course. Various other monsters were unsettling and dangerously menacing, but it wasn’t anything specific that made Diablo I creepy. The overall atmosphere and mood of the game was much darker and more foreboding than in Diablo II. The dungeons were cramped and ominous, the famous Tristram theme was filled with despair, the NPCs seemed resigned to their fate, the monsters squealed horribly and died with real emotion, etc.

Ironically, Diablo is not thought of as a horror game. There are 174 games listed in the horror video games category on Wikipedia, and Diablo’s not among them. True, the Wikipedia list is debatable, since it’s comprised almost entirely of games that were self-assigned into the “horror” genre (whether they’re actually scary, or any good, is another question) or FPS titles with non-human enemies. Apparently any game is scary if it’s got a first person view and zombie-dinosaurs that jump out from behind crates from the side of the screen? In a strange way, being snubbed provides Diablo with an accolade. After all, look at what most “horror” games do to live up to their genre? Lots of cheap thrills, gruesome and noisy creatures rushing at the screen, gory, highly-realistic visuals, etc. That Diablo was much more memorably unsettling, with an isometric view and tiny, pixely graphics, just testifies to how effective it was at evoking an ominous tone and mood. 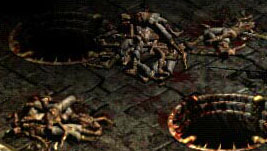 Diablo II was made by the same designers, it didn’t change the setting, and I doubt they tried not to be scary, yet I’ve never heard anyone refer to Diablo II as a horror game. Certainly not in comparison to Diablo I. Diablo II had a lot of the same elements, and with much better graphics it could show more gruesome scenes. Yet the game just does not have the same mood of despair and gloom, and the atmosphere never feels creepy or oppressive. Why not?

I think there are two main reasons. First, the variety of settings makes for fun gameplay, but makes it impossible to sustain a creepy mood. Open grassy surface areas in Act One with animal-like monsters, the bright desert of Act Two, the non-threatening jungle of Act Three, and the frozen tundra of Act Five were simply not very atmospheric. They were enjoyable areas, but they had zero gloom and doom. Second and more important, the gameplay was not conducive to maintaining a horrific mood. Diablo II plays so much more quickly than Diablo I, thanks to all of the multi-target skills, much faster combat, and the ability for players to run, that the horror elements are largely defused. After all, what’s scary in a horror movie? Usually it’s the hero or heroine on foot, alone, in unfamiliar territory, with unknown monsters (human or otherwise) all around. If the hero could simply outrun the enemies, or beat them up, or take numerous hits without slowing down, it wouldn’t be much of a horror movie. (It would be an action movie, or a superhero movie, which is a fairly accurate analogy to Diablo II.)

The D3 Team has talked about returning Diablo III to the horror vibe that was absent from Diablo II, and from what I saw in my play time at Blizzcon, they’re on the right track with the design, the graphics, the visuals, and more. Let’s take a moment to consider Diablo III‘s horror elements.  We’ve only seen a few areas of the game so far in gameplay movies; a generic dungeon and a generic surface area. Neither of those distinguished themselves overmuch, but the New Tristram area that Blizzcon attendees got to explore was just chock full of horror elements.  I described some of these in a gameplay report posted shortly after Blizzcon.

New players started off in a tiny encampment with just two NPCs. One of them was a talkative soldier, but the other was a silent meat wagon driver who spent his time endlessly shuffling between a wagon stacked high with bodies, from which he kept pulling corpses that he carried over and dumped onto a burning pyre. The animation was great, and the bodies were very well drawn as well. They looked like corpses, bloody and murdered ones.

The mood continued as soon as a player moved out into the ruins of Tristram. The scenery was dark and oppressive, and no, the screenshots don