We recorded The Diablo Podcast #60 over the weekend with a revolving cast of guests, and there was a lot of interesting conversation about the state of all five classes in the

Diablo 3 Beta Test. We also debated general issues related to the big skills / runes system remodel, and the issue of things being under or overpowered due to the removal of skill ranks came up several times. 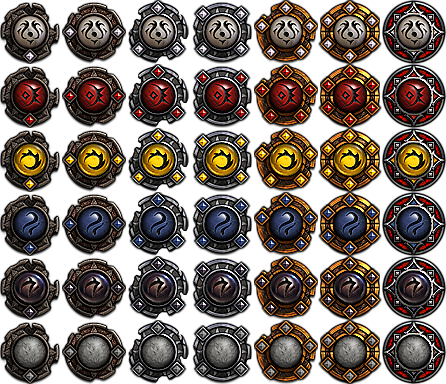 In the previous system, runestones were found ranging from rank 1 to 7. Each rank was more powerful, dealing more damage, increasing the duration, adding more projectiles, etc… whatever was appropriate to that particular skill and rune effect. This is no longer the case, as all skill rune effects now work like base skills, with a base function that scales up with your Clvl and attributes, but does not get directly boosted by any sort of skill rune item. Here’s what Jay Wilson said about it in his explanatory article:

The new skill rune system does not have ranks, and we’ve instead made each around the equivalent to what the rank 4 or 5 rune was previously. One click, you make your rune choice, and you get an explosive benefit to that skill.

So what’s the potential problem with that? Click through to find out.

Jay’s explanation sounded iffy to many of us right from the start. Wouldn’t every rune effect be grossly overpowered if the game had been built for them to be level 1 or 2 in Normal, and now they were all instantly equivalent to level 4 or 5?

Furthermore, the removal of skill levels had been explained and justified largely by reference to skill rune ranks. No levels to skills was a big loss in customization, and an even bigger problem for balancing. Compare the power of level 1 vs. lvl 20 (or 30, or 40) skills in a game like Diablo II to get a sense of the massive changes RPG fans are used to enjoying as we improve a skill over the course of the game. No skill ranks makes sense for skills like teleport or other one-point wonders, but it seems unworkable for damage output attacks that generally start at say +50% dmg, and rise to +300%.

The D3 devs insisted they had that under control, and that skills were balanced in D3 since their damage scaled up or down depending on a character’s attributes, equipment, Clvl, etc. Most fans accepted this, since after all, we had rank 1-7 in the skill runes, which largely stood in for the removed skill levels.

Except that now we don’t have skill ranks, and skill rune effects are all one size fits all.

Ironically, there’s a very easy solution to the removal of skill runes. Since their drop rate/quality/frequency was largely determined by the difficulty level, why not just bake that property into the game itself? Rather than players scrambling to find rank 1-3 runes on Normal, 4 on Nightmare, 5 on Hell, and 6-7 on Inferno… just give the runes roughly that level in the new rankless system. Thus something like the Fork effect in Magic Missile would yield 3 projectiles on Normal, then, 4, 5, and 7 on the higher difficulty levels.

Problem solved! And yet that’s nowhere near what Jay said in the official explanation, so apparently the devs think the “one size fits all” style is a better approach, as they argued previously when they removed skill levels.

This issue came up several times on the podcast (as each new guest stated his worries about the system), but Wolfpaq summed it up nicely in his opening comments, from about 36:00 in the show.

I’m a little bit concerned about how they’re going to replace skill ranks. The new skill calculator just came out yesterday, and a lot of the skill runes are drastically nerfed from what their rank 7 counterparts would have been.

Magic Missile is something I’ve been looking forward to since we saw a video of it from BlizzCon, with 7 or 8 missiles per cast. Now the rune is hard stuck at just 3 missiles, and we’ll never see more than that. That’s a little disappointing to me and that’s just an example; there are dozens of skills like that where they said we were getting rank 4 or 5, but really we got rank 1 or 2.

As Wolfpaq pointed out, the change is most obvious with rune effects from what used to be the

Indigo Rune (which was the Multishot rune earlier in development).

Check out the video for more visuals; it’s from Blizzcon 2010 and shows off a wide variety of runestone effects that used to be possible with rank 7 runestones. Note the Wizard’s multishot Magic Missile, as well as the huge boosts the Indigo rune granted to the Witch Doctor’s

Poison Dart (a true machine gun, very unlike the 3-shots we’re stuck with now) and also his

So, is this a real problem? It’s certainly a loss in fun; anyone who wanted to use Magic Missile with multishot wanted as many projectiles as possible, for more damage as well as more fun. The developers can obviously tweak the damage so that 3 shots deal roughly the same as 7 or 8 would have, but it’s going to be radically different in usage, with no chance to be the

Rune under/overpowered issues aside, how about the larger issue? Are you guys worried about the structural integrity of the camel’s spinal cord as straw after straw of removed character customization is stacked upon the poor beast? Since the early design theories of Diablo III, the developers have removed skill ranks, runestone ranks, customizable attributes, charms via the talisman, two of the six gem types, the Mystic and her item enchants, and no doubt several other things I’ve forgotten or that we never knew about in the first place.

Is there a point where “just equipment” becomes insufficient to differentiate your character from every other character of the same class on Battle.net? Especially since the game is designed to so that every character will max out at Clvl 60, and the

freespecs system will encourage everyone to duplicate each new